To discover more about how the Wellington water network is managed you headed out to Wellington Water’s office in Petone. Wellington Water is the organisation which looks after all of Wellington’s drinking water, stormwater and wastewater. You met Colin Crampton who leads the Wellington Water team. Colin talked about the importance of water to people’s health and wellbeing and how much work is done to keep our water clean. Watch the video about this.

A flood of questions

After talking to Colin, you met with Ben Fountain who works on computer models. These models are used to monitor the water network and manage risks, such as floods. It was a surprise to hear that Ben loves floods! Floods are a risk for parts of Wellington and can cause problems with drinking water, stormwater and wastewater. Yet Ben enjoys the challenges that floods present and finds it really satisfying to find ways to work with Mother Nature to help lots of people. Ben answered questions from St Joseph’s School in Stratford and Piopio Primary School during the first web conference. Students asked some challenging questions and Ben gave everyone a much better idea of just how much work goes into supplying drinking water. You can listen to a recording of this web conference.

Following the web conference, you drove out to the Wainuiomata Treatment Plant to follow the journey of water from its source to our taps. You were given special permission to enter the catchment where water is collected. This forested area is carefully managed to keep the water as clean as possible so that it can eventually become drinking water. You met Tony who works at the treatment plant and he showed you around. Water treated at this plant comes from the Wainuiomata and Orongorongo rivers plus three smaller creeks.

Not as clean as it looks

Tony took you up the valley to see where water comes in from the Wainuiomata River. Water is diverted from the river, over a screen and into pipes which head to the treatment plant. The screens filter out large objects such as sticks and leaves. Once the water enters the plant it is separated, filtered and disinfected. The ambassadors were surprised and how much work was needed to make what looked like clean water clean enough to drink. Water from rivers can look clean but it can contain tiny bugs such as bacteria and viruses that could make people sick if they aren’t removed.

Tony showed you where chemicals called coagulants are added to the water to attract and gather together impurities such as dirt. Once these impurities coagulate, or group together, into larger clumps known as floc they can be removed. To remove floc millions of bubbles of air are pumped through the water which causes the floc to float to the top where it can be removed. You can see this in the video. It was incredible to see the dirty layer of floc and it made me appreciate how clean our tap water really is.

Once the floc has been removed it is spun in a machine called a centrifuge which is like a giant washing machine to remove any excess water, leaving behind a dry solid sludge. This sludge goes to the landfill and I was amazed that Wainuiomata produces about 4 tonnes of solid sludge a week.

From here the water passes through a final filter of anthracite or sand and then has chlorine added to kill any bugs that may remain in the water. This chlorine also protects the water as it makes its long journey from the reservoir to our taps. Keith Woolley met you at the lookout above Petone to show you where water travels through underground pipes across the Hutt River bridge and under State Highway 2 into central Wellington. You can see this in the video. All this water flows downhill, so no pumps are needed until it reaches hill suburbs. It’s hard to believe just how much water is transported through such a huge network of pipes every moment of every day.

Wellington also gets water from other rivers and underground. Geoff Williams talked to you about these water sources and explained what an aquifer is. An aquifer is an underground layer of gravels or soil which holds water. Water is usually moving very slowly through an aquifer, being filtered along the way. An aquifer behaves like an underground sponge and Wellington is lucky enough to have the Waiwhetu Aquifer beneath Lower Hutt. This Aquifer extends under the harbour and in the future drilling in the harbour basin may allow more of this water to be used to meet Wellington’s future water needs. You can find out more by watching the video.

Tomorrow you will discover what happens to water once it goes down the drain. 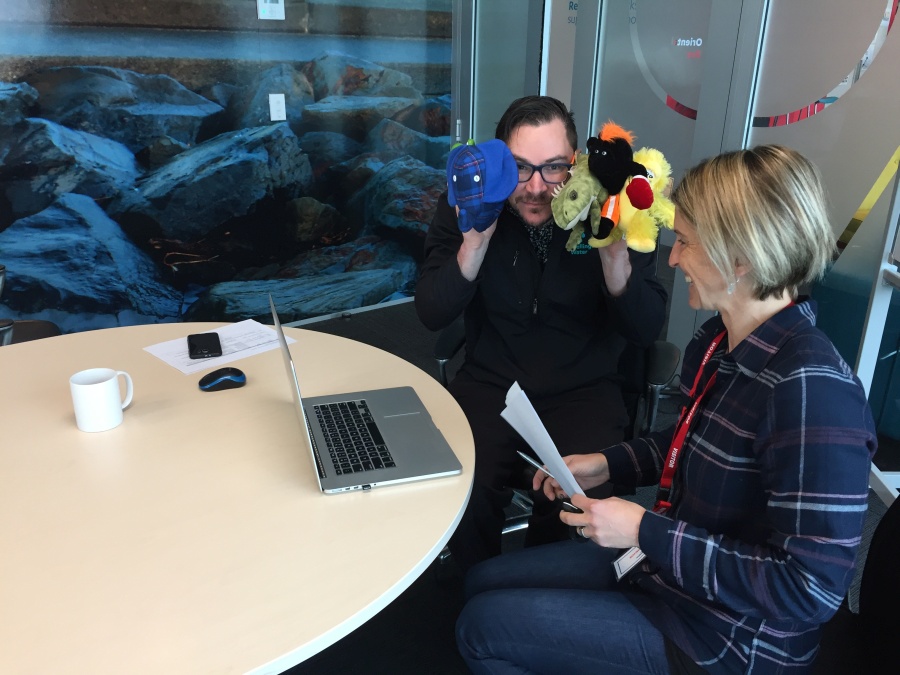 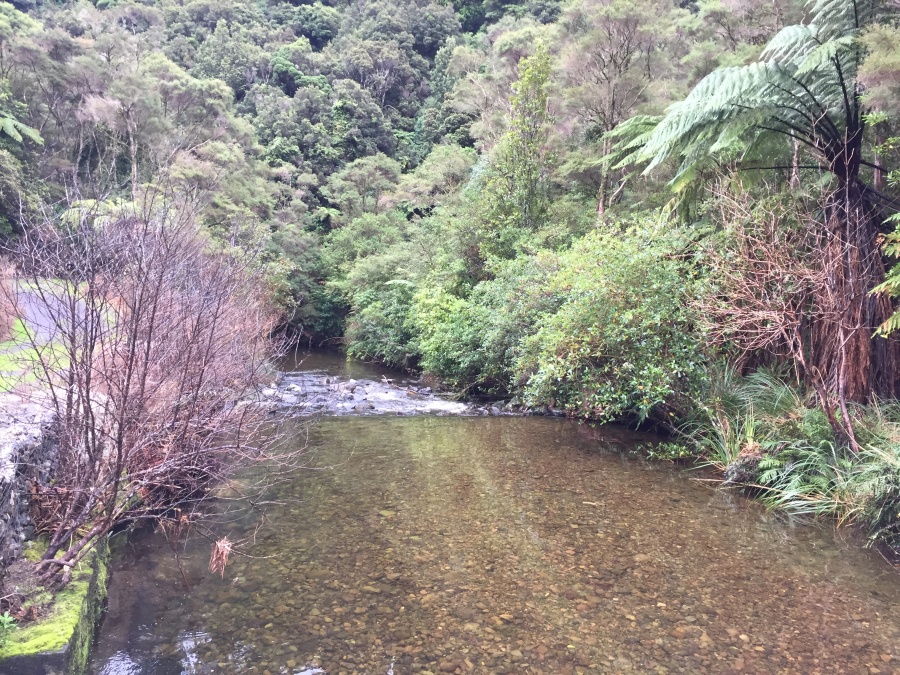 This is the Wainuiomata River which is used to provide drinking water for part of Wellington. What other rivers are there in this catchment? Image: LEARNZ. 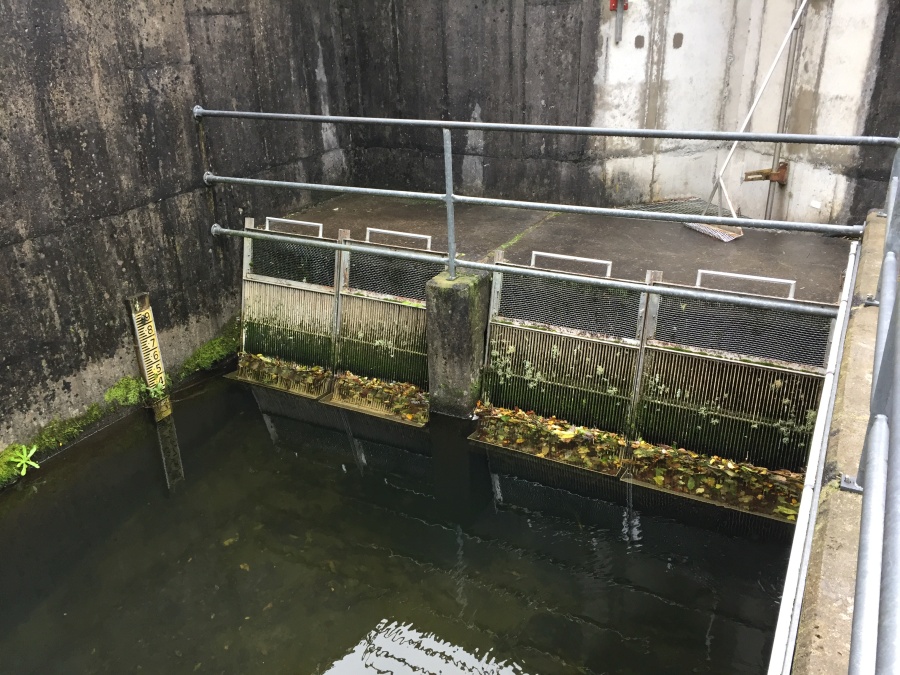 Water from the river passes through a screen to remove debris before it enters the treatment plant. Image: LEARNZ. 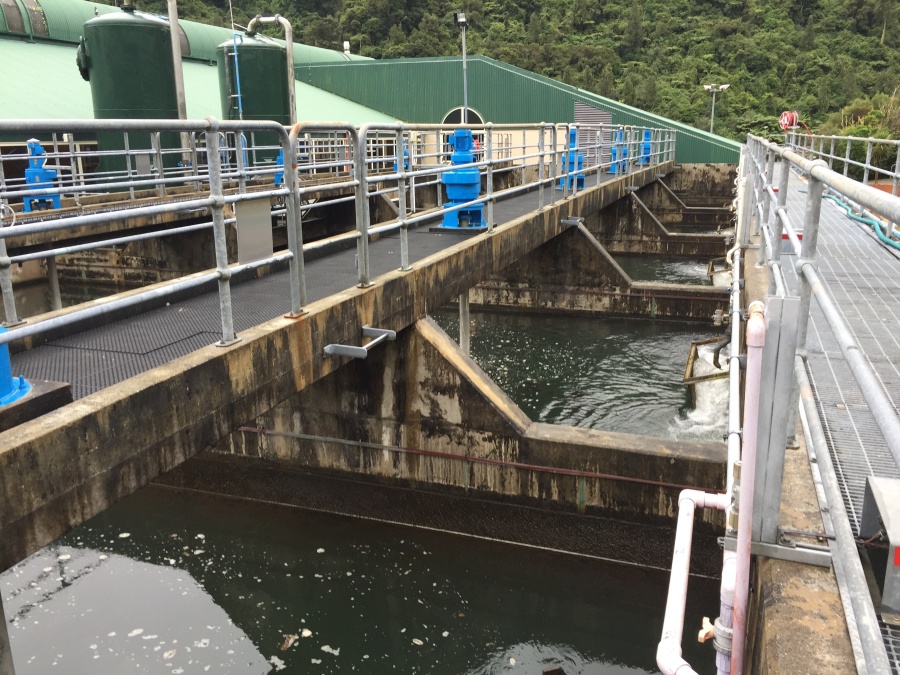 Coagulants are added to the water to help remove impurities. How do coagulants work? Image: LEARNZ. Tony takes a water sample to see how clear the water is. Image: LEARNZ. 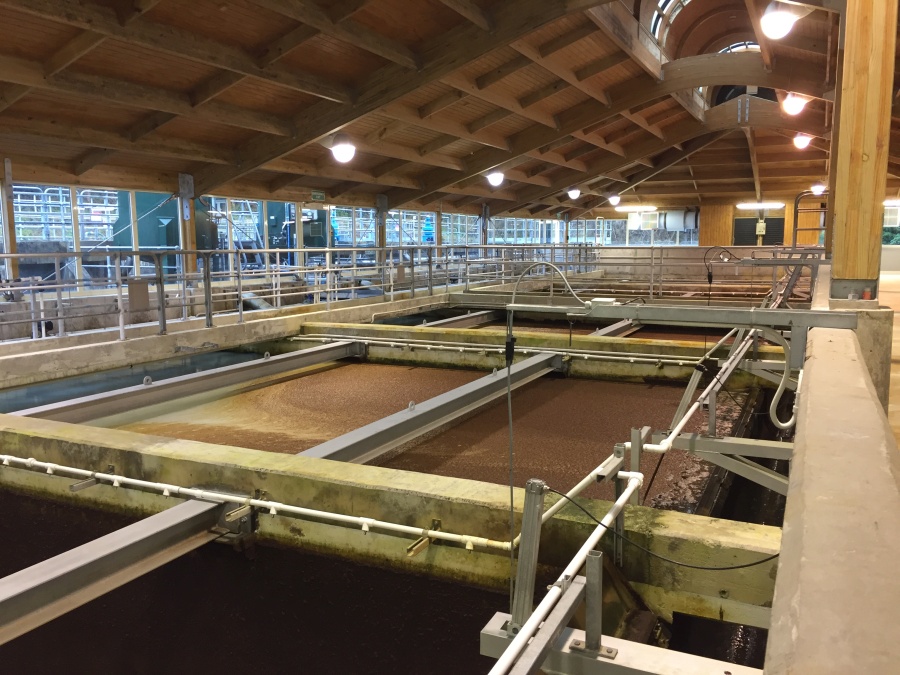 Air is bubbled through the water to make the floc rise to the surface. What is floc? Image: LEARNZ. 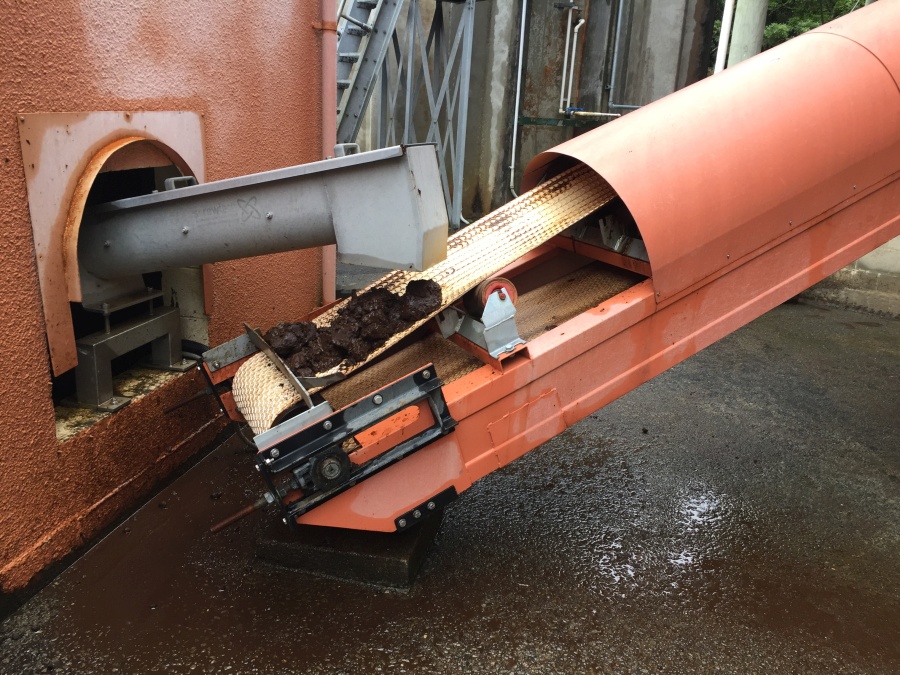 The floc has excess water removed creating this sludge which has to be taken to the landfill. Image: LEARNZ Keith and Shelley brave a cool Wellington Wind above Petone to see where water from Wainuiomata Treatment Plant ends up. Image: LEARNZ. Water travels from Wainuiomata Treatment Plant into Wellington. How does it get from the plant to people's taps? Image: LEARNZ