Today we went to a farm that uses irrigation. Here we spoke with Damon Summerfield about how irrigation works on his farm, and how it has assisted his farming practice.

This morning’s web conference took place on some hay bales in one of Damon’s sheds. I couldn’t think of a more fitting location given we were on a farm! As well as Damon there was also Elizabeth Soal as our second expert to answer questions.

Our speaking school was Sancta Maria Catholic Primary School. Also joining us were some listening schools. It was an enjoyable discussion, with some helpful information and thought-provoking discussion. Go to the Web Conferences page for the recording.

Down on the farm

After the web conference we went for a look around Damon’s farm. Damon explained what sort of crops he grows on the farm and how he rotates these crops. There was kale which cows were going to be feeding on, grass for his sheep and for grass seed, seed potatoes for a chip manufacturer, to name a few. Other crops that he had recently grown were barley, wheat, mustard seed, cabbage, and chrysanthemum (used as a tea in East Asia!).

Damon has been using irrigation on his farm for two years. The main difference now compared with farming without irrigation is that he has more certainty each crop will grow to its full potential. He can also have crops in the ground for less time. This means he can grow more than when he didn’t have irrigation. Such is the value of having on-demand water.

I noticed on our look around the farm two paddocks that both had lambs grazing. One paddock looked a lot drier than the other, and not as lush as the one we were in. It was understandable when Damon explained that one was irrigated and the other wasn’t. The irrigated one grew better grass over the dry summer and would help the lambs grow better.

Our final stop for the day was at one of Damon’s three pivot irrigators. It was great to get up close to the irrigator and see it working. I have often seen them from a distance but now I have a better understanding of how they work – although I got a little bit wet in the process!

The cool thing about Damon’s irrigators is that he can control them from his mobile phone. From anywhere he can start and stop them, control their speed and flow rate, plus several other functions. In the video Damon shows you the app he uses to control the irrigators, and you get to see an irrigator in action.

Catch you tomorrow for the final day of the field trip, 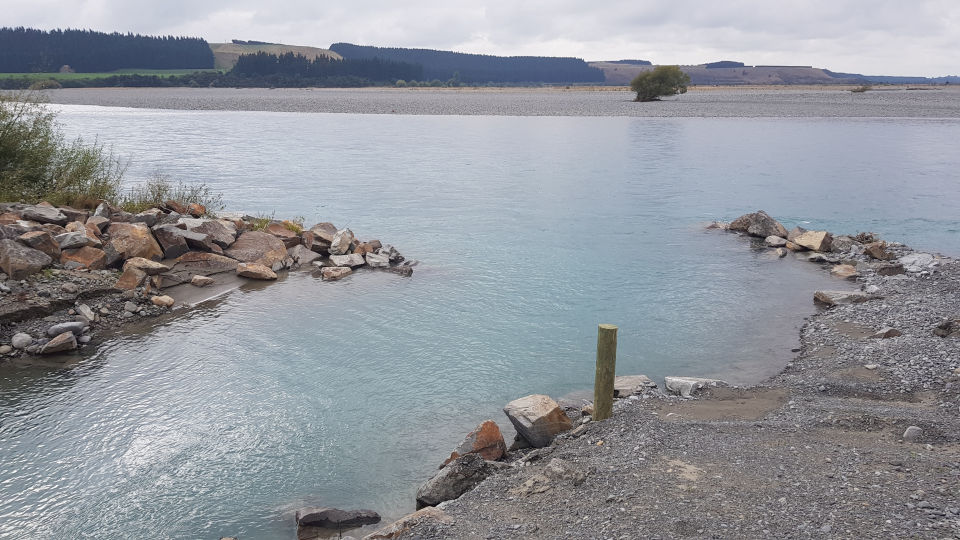 This is the Waimakariri intake, where water is taken by Central Plains Water to supply farms for irrigation. I wonder if there are times when CPW can't take water. Image: Andrew Penny, LEARNZ. 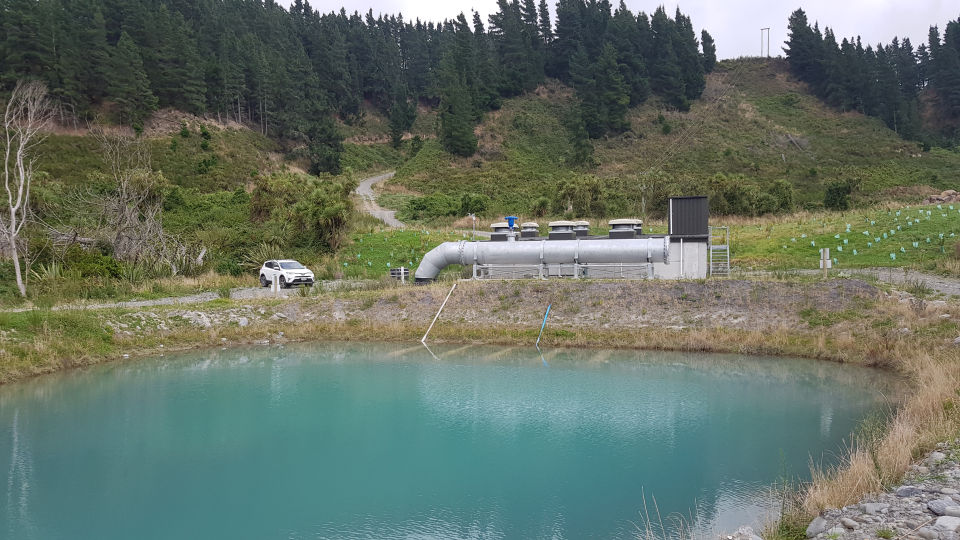 Here you can see the pumphouse where water is pumped to storage lakes, ready for distribution to the farms. Image: Andrew Penny, LEARNZ. 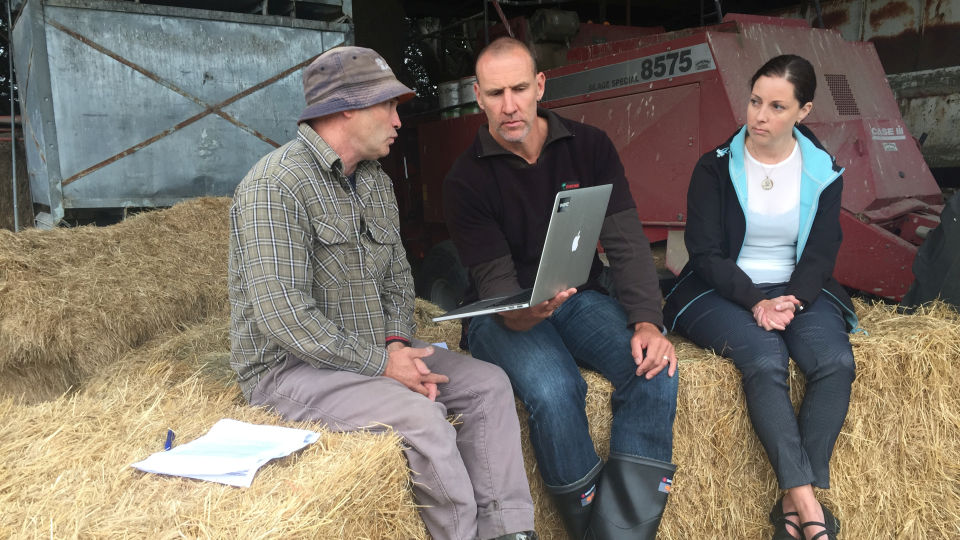 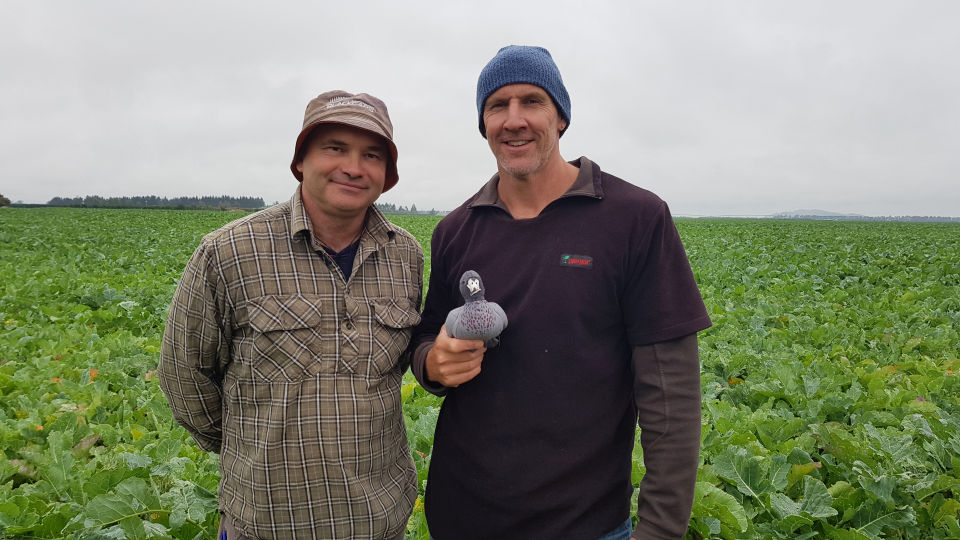 Andrew and Eddy with Damon Summerfield in front of a kale crop. What do you think will be eating the kale? Image: Shelley Hersey, LEARNZ. 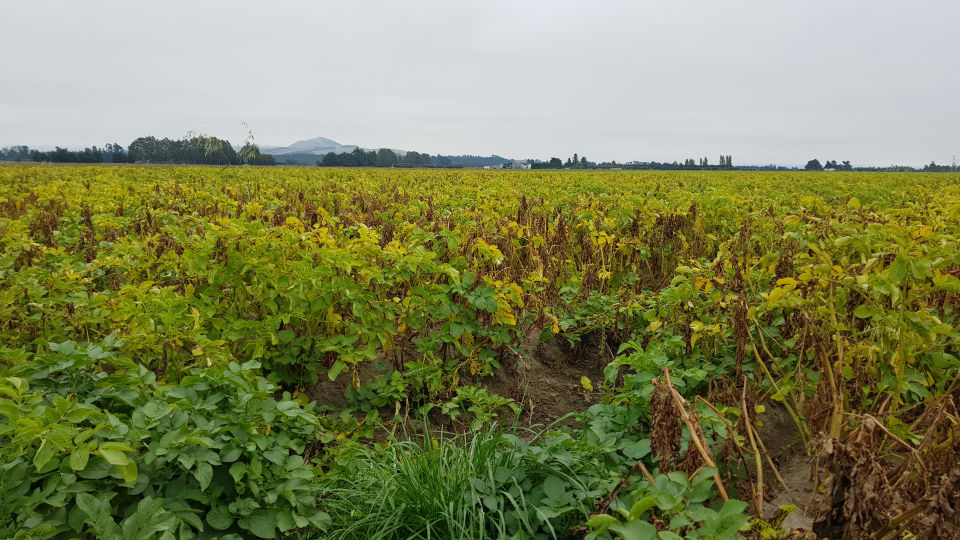 Damon has been growing seed potatoes, one of a variety of crops on his farm. Image: Andrew Penny, LEARNZ. 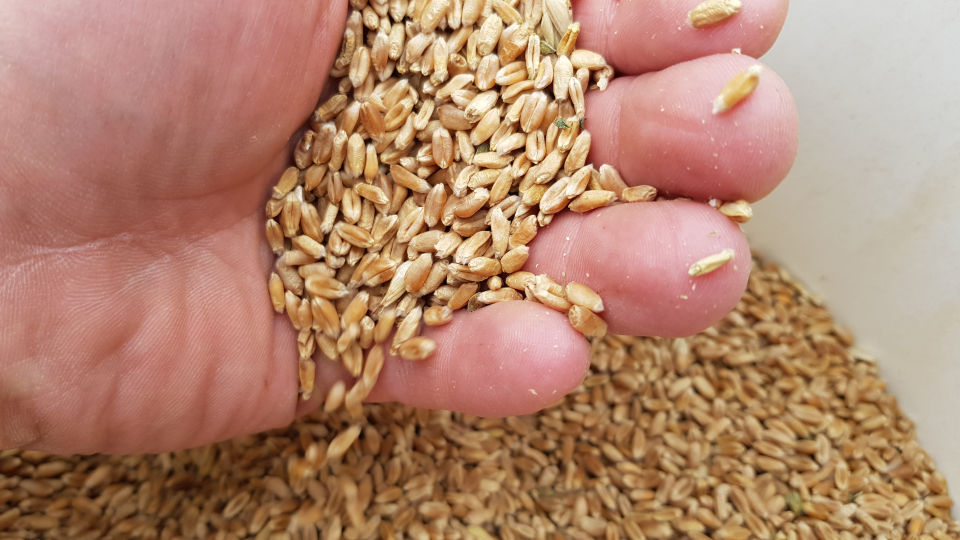 Here is a close-up look at some harvested barley from Damon Summerfield's farm. What other grains might be grown around Canterbury? Image: Andrew Penny, LEARNZ. 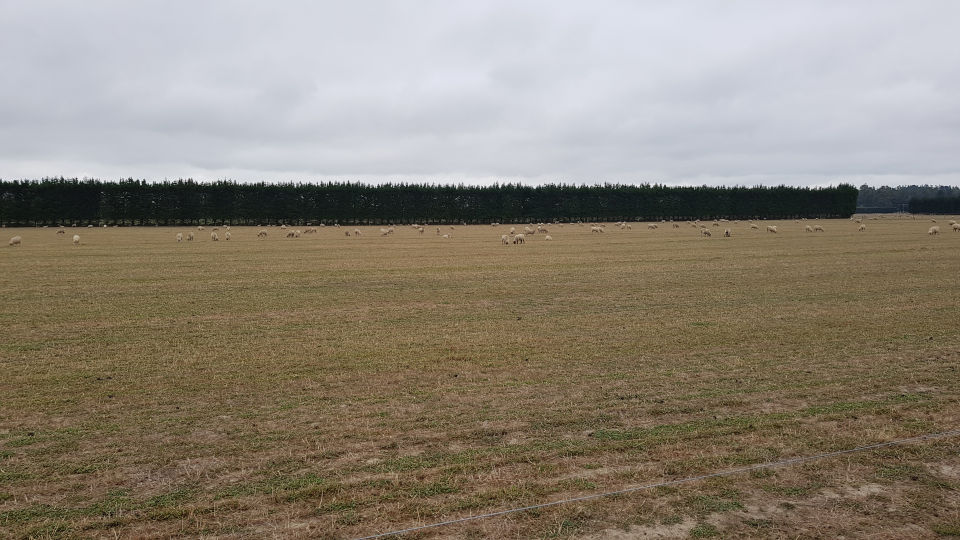 Compare this photo with the next one. It shows the difference between a grazing paddock that has not been irrigated over summer with one that has. Image: Andrew Penny, LEARNZ. 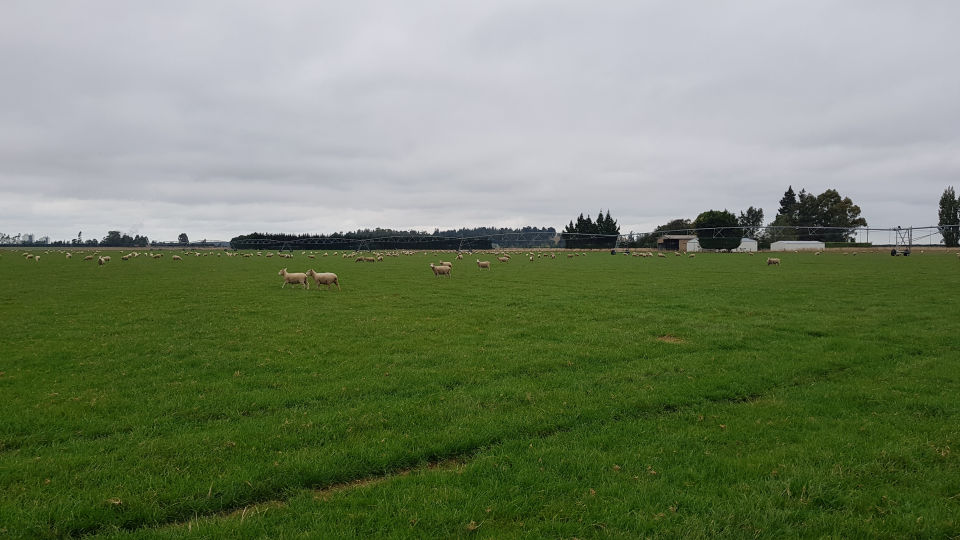 Can you see which paddock has been irrigated? What advantages does irrigation provide compared with dryland farmers? Image: Andrew Penny, LEARNZ. 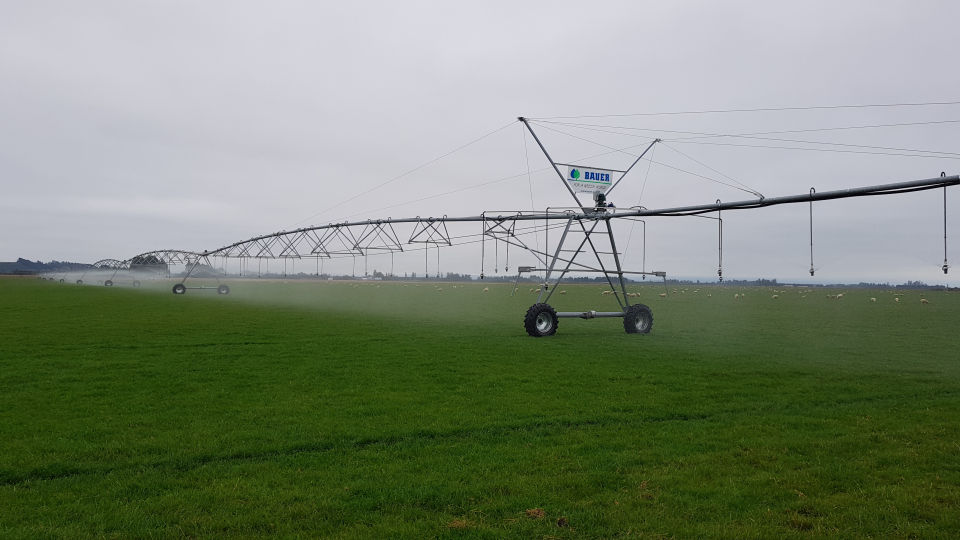 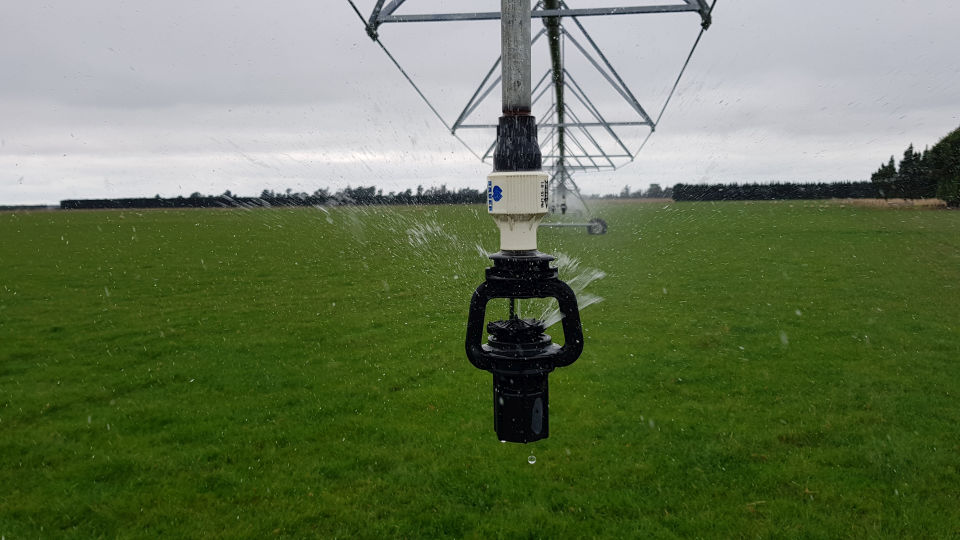 A close-up view of one of the many sprinklers attached to the irrigator. Image: Andrew Penny, LEARNZ. 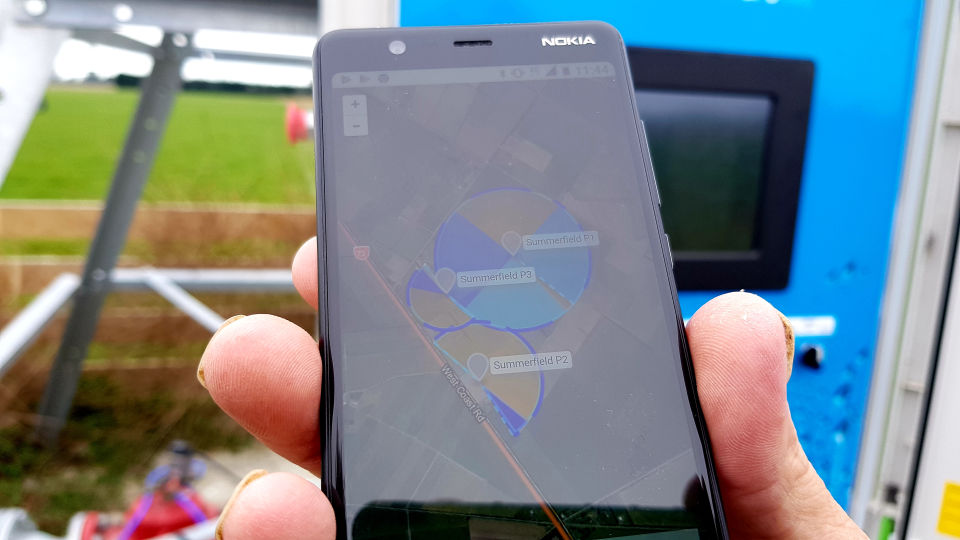 A mobile phone app enables Damon to control his irrigators from anywhere. How might this technology benefit farmers? Image: Andrew Penny, LEARNZ.