You had to be up early today to check-in for the morning sailing across Cook Strait. The ambassadors were excited about the voyage and so too was I once I realised that the weather was settled and the sea calm. I had been a bit nervous about how rough a crossing of the Strait might be at this time of year.

After collecting your tickets you discovered that the Kaitaki Interislander Ferry was delayed. The water heating system had to be fixed. Thankfully the problem was soon solved and you were able to board the ship just in time to set up for the audioconference with St Alban’s and St Helier’s School. Several safety announcements could be heard over the ship’s intercom and before we knew it we were heading out of Wellington Harbour. You met Jennifer Coppola who is a nautical cartographer with Land Information New Zealand (LINZ). Jenn has an amazing job and has travelled across the world making nautical charts. Jenn talked more about her work during the audioconference and had interesting answers to our speaking schools' challenging questions. You can find out more by listening to the recorded audioconference.

You were lucky enough to gain special permission to enter the bridge of Kaitaki. It is the bridge from where the ship is controlled. It is a bit like the driver’s seat of the boat. You met Richard the Captain and he showed you some of the technology that is used on board. To navigate, mariners use charts rather than maps. These nautical charts show the coastline, features such as reefs and beacons and the depths of water. Jen showed you some older paper charts while Richard explained how he uses electronic charts. It was interesting to compare these old charts with the new ones. You can see these in the videos.

Richard showed you the electronic chart that uses GPS to show where the ship is in real time. He can plot his course and easily follow a set path on the electronic chart. It was easy to see exactly where we were as we entered Tory Channel. Areas of shallow water were clearly marked and an alarm sounds if the ship enters these. Other technology such as radar and AIS also keep the ship safe. AIS is an automatic identification system that receives and transmits information from and to other vessels, so each ship can be identified and tracked. This system also helps stop ships from colliding into each other. You can find out what ships are sailing in the Marlborough Sounds area here. You can also see ships with AIS tracking here. On the radar we could see a tiny fishing boat ahead of us in the channel long before we were able to see it out the window.

You left the bridge to give Richard space to navigate Tory Channel and headed out on deck. The sea was amazingly calm, the sun shone brightly and it was easy to see why so many tourists come to visit the Malborough Sounds. You may have even caught a glimpse of the dolphins in the distance as they glided their way up the Sounds. Jenn was able to show you some clever apps that have been developed to help people stay safe at sea and navigate. Marine Mate shows everything from tides, to reserves, to boat ramps and even the route taken by the Interislander. You could zoom into different parts of the country and get all sorts of maritime information. Another app called Hydrographic Note lets you add photos of anything that might help others navigate such as rock obstacles or wreckage. You can watch the video to find out more.

All four engines were used on the crossing so despite your late start you still arrived in Picton on time. I was surprised at how quickly the journey seemed and I wished that we had the time to head back across the Strait rather than fly.

A short drive to Blenheim and then an even shorter flight brought you safely back to Wellington. This gave you time to head to the National Library to see the Unfolding the Map exhibition. This is a must see if you are in Wellington. There is an incredible collection of old and new maps and charts. You could even see some new 3D maps. You met Richard the curator of the exhibition and he showed you how nautical charts have changed over time. You can watch the video about this. I found it incredible how accurate some of the first maps were. Captain Cook’s map from his 1769 and 1770 voyage was used for many years despite it being created before reliable technology was available.

You have managed to travel across the sea, through the air and over land today and I now have a new appreciation for how important nautical charts are. I hope you have enjoyed the journey and are ready for another one tomorrow.

See you at the train station, 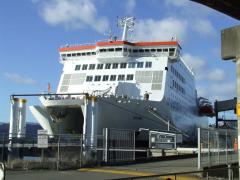 All aboard the Interislander Kaitaki ferry destined for Picton. How far is the journey across Cook Strait? Image: LEARNZ. 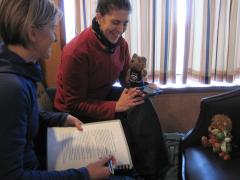 Jennifer Coppola from LINZ answers questions during the first audioconference on board Kaitaki. Image: LEARNZ. 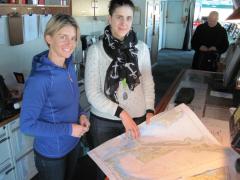 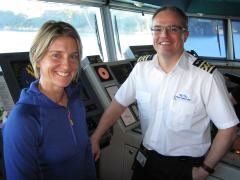 Shelley meets Richard the Captain on the bridge of Kaitaki. What do you think happens on the bridge? Image: LEARNZ. 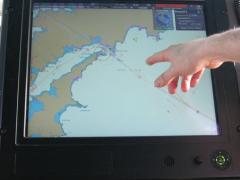 Richard shows you an electronic nautical chart. How are these charts different from paper charts? Image: LEARNZ. 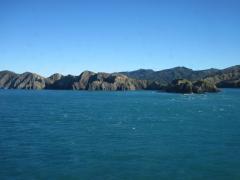 After crossing Cook Strait you head into Tory Channel. Why might this area be harder to navigate? Image: LEARNZ. 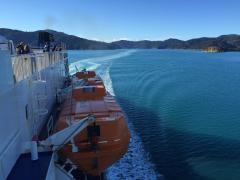 It was a stunning day to sail through the Marlborough Sounds. What do you think the orange objects on the side of the ship are? Image: LEARNZ. 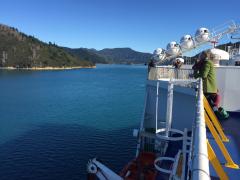 Heading towards Picton. What technology is used to navigate the Kaitaki? Image: LEARNZ. 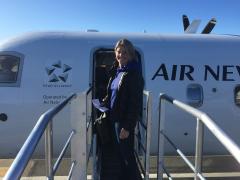 Time for a quick trip back from Blenheim to Wellington. Image: LEARNZ. 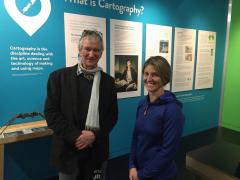 Richard the curator of the Unfolding the Map Exhibition talks to you about nautical charts. How have New Zealand nautical charts changed since they were first made?