I can’t think of a better way to start the day than jumping in a helicopter to fly to a penguin colony in Antarctica and that’s exactly what you were able to do this morning. You woke to perfect weather; a light northeast breeze, unlimited visibility and -15 degrees Celsius.

Before your flight out to Cape Bird we spoke to Banks Avenue School and Cobham Intermediate during the first audioconference then Korakonui School and Marian Catholic School in the second audioconference. Kate Sparks from the University of Otago answered some tricky questions. Some of the questions sparked debate last night at dinner as Kate talked to other scientists to get their opinion. One question about whether there should be eco-tourism in Antarctica lead to much discussion. You could talk about whether you agree or disagree with Antarctic tourism with your class. You can also listen to the recordings of these audioconferences.

Time for a chopper

As soon as the audioconferences were finished you had to rush down to the locker room to squeeze into all your ECW clothing ready to fly out to Cape Bird. The flight out to the Adelie penguin colony takes about half an hour and you were treated to spectacular views of Mount Erebus, Cape Evans and the sea ice. Many people that come to Scott Base don’t get the chance to visit Cape Bird. You had to get a permit to allow you access to this Antarctic Specially Protected Area (ASPA) and do everything possible to reduce your impact on the environment.

It was a little warmer out at Cape Bird so once you had landed you could take off your ECW jacket and head up to the hut to grab a quick snack. The hut sleeps eight people and would be your home for the night. The first thing you may have noticed as you approached the penguin colony was the noise; these little penguins had gathered in their thousands and they were very chatty. You can watch the videos to hear the penguin cries that echoed around the bay and view the panoramas to see how big the colony is.

Adelie penguins as far as the eye can see

I felt so lucky to be in such an amazing place during fine weather. You can probably imagine how cold it can get out here on a windy day let alone during winter. Adelie penguins have chicks in December and were just a week away from laying eggs. At least these penguin chicks can enjoy the endless daylight of summer while the poor old Emperor penguins breed during winter.

The power of penguin pooh

Your trip out to Cape Bird was more than just a visit. You had promised to help Steve Wing and his team collect samples. Steve had brought a pack full of plastic tubes and plastic bags specially cleaned so that they could be used to store samples. The ambassadors were keen to get started until they discovered that the samples Steve wanted were actually pooh samples! Bird pooh is called guano and with the help of some machinery back in New Zealand Steve would be able to analyse the guano to see what the penguins had been eating. This research will help us to learn more about the foods penguins rely on and in turn what that food source has been eating. Understanding these food webs will help scientists to predict what might happen if there is less sea ice around in the future due to climate change.

Collecting penguin pooh is not as gross as you might expect because it is mostly frozen. Steve did however want to collect fresh guano from that day otherwise it starts to breakdown and he won’t get accurate results. When you were putting samples into tubes you had to wear gloves and take special care not to contaminate the sample with anything else. You can watch the video to see how the samples were collected.

Interestingly penguin pooh makes the ocean more productive. The nutrients in the guano help plants to grow which helps consumers like penguins and seals further up the food chain.

The Adelie penguin is also a good bird to study because it acts as a sentinel, meaning it can indicate when the ecosystem is healthy and when it is not. If there are fewer Adelie penguins around it means that the marine ecosystem is not working well and is under stress.

You needed to make sure that while you were at Cape Bird you did not stress the penguins or leave anything behind. You had to keep ten metres away from the penguins unless they came to you. You may have been lucky enough to have the odd curious penguin come right up to you to check you out. I was surprised at how close some of the penguins came to me. You also had to take a pee bottle and pooh bucket so you could take your waste back to Scott Base. Even the water that you washed your dishes in at the hut was drained into a bucket and taken back to base.

After a full day exploring the penguin colony you stayed in the hut that overlooked the bay. The views were stunning and you may have even spotted a leopard seal chasing an Adelie. The helicopter will pick you up bright and early tomorrow so enjoy your night at Cape Bird. 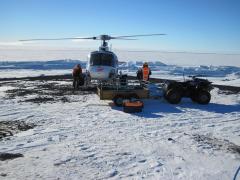 It was a perfect day to be flying out to Cape Bird today. Where is Cape Bird in relation to Scott Base? Image: LEARNZ. 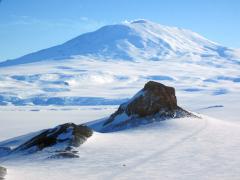 As you left Scott Base you could see the volcano Mount Erebus smoking away. How often does Mount Erebus erupt? Image: LEARNZ. 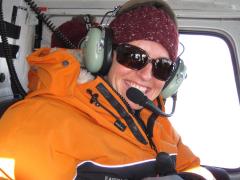 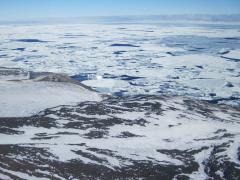 You could see out beyond Ross Island to the sea ice that has begun to crack and break up. When do you think this sea ice will melt completely? Image: LEARNZ. 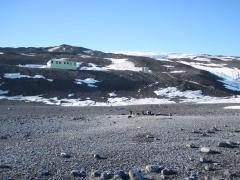 Home away from home. You will stay at this Cape Bird hut overnight. Why do you think this hut has been put here? Image: LEARNZ. 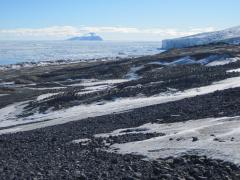 Looking out over the Cape Bird Adelie penguin colony. How many penguins do you think there are in this colony? Image: LEARNZ. 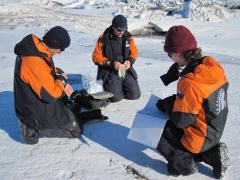 Sal, Steve and Rebecca set up to collect penguin guano. Why do the scientists want to collect this? Image: LEARNZ. 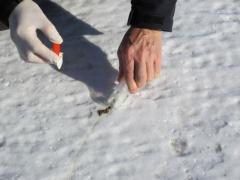 Steve collects a sample of penguin guano to take back to New Zealand to analyse. How many samples do you think Steve should collect? 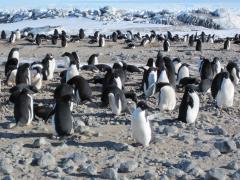 These Adelie penguins are building nests and soon they will lay eggs. When do the Adelie eggs hatch? Image: LEARNZ 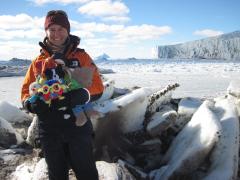 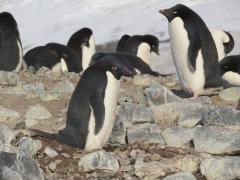 Adelie penguins build nests with rocks and you can often see penguins stealing rocks from other nests. Image: LEARNZ.