You woke to a heavy frost and chilling temperatures in Arthur’s Pass this morning but with clear skies overhead you could look forward to a stunning day on the wild West Coast.

Luckily you were able to put off stepping out into the -9 degree morning air and stay in your cosy motel for a little longer in order to complete the first audioconference. Mercury Bay Area School had great questions which Sam and Ali found challenging. Sam’s main area of study is volcanoes so he enjoyed answering questions about volcanic hazards. You can listen to a recording of this audioconference to learn more.

A land of folds and faults

Today you were able to cross the Alpine Fault which is one of the world’s fastest moving faults but this is not the only fault in New Zealand. Our country has thousands of faults which have helped shape the land. Yesterday you were able to see another fault as you approached Porters Pass. This fault has been an active fault for the last ten thousand years. The fault lies deep down beneath the ground but at the surface Sam showed you where you could see a fault trace created when the fault last broke in an earthquake and you can see this in the video. Not all faults can be seen on the surface. Erosion from rivers and heavy rainfall can wear down or even bury fault traces so scientists have to dig or drill into the ground to find out where some faults are. Faults also don’t always cause ruptures at the surface so can remain hidden.

If you are wondering why New Zealand has so many geohazards you need to look back in time. All of the continents on Earth fit together like a jigsaw and they once were joined in one giant super continent which over millions of years broke apart. The Earth’s surface is divided into about seven large tectonic plates and several smaller ones. The heat inside the Earth’s molten mantle creates currents just like when you boil water in a pot. This movement provides the energy to move these plates which is why the continents have moved. Movement along plate boundaries, and smaller breaks in the crust called faults, can lead to earthquakes and volcanoes. Sam described this plate movement as the engine room for earthquakes because this is where the energy for quakes comes from. Without plate movement there would be no earthquakes or volcanoes. New Zealand sits on the boundary between the Australian and Pacific Plate so our land continues to move and change. You can watch the video about this.

After leaving Arthur’s Pass you headed down to a lookout over the Otira Viaduct. Here you met some friendly kea and also could see some massive scree slopes. It was scary to think about how much this area could be affected by an earthquake. Sam talked about the Alpine Fault which is about 20 kilometres east of the viaduct. This fault is locked at the moment but eventually enough strain will build up and the fault will break or rupture causing an earthquake. Scientists have studied past earthquake events on this fault and have found that the Alpine Fault ruptures on average every 330 years, producing a large earthquake. This land movement would cause widespread damage and trigger landslides. Luckily the viaduct has been built to withstand earthquakes but other roads are likely to be cut off, power lines cut and water pipes broken.

Once you had thought about how damaging a large earthquake would be you were able to drive westwards to an area where the Hope Fault branches off the Alpine Fault. Sam talked about the factors which affect how strongly we feel an earthquake and these include how close you are to the fault, how deep the earthquake epicentre is and how much of the fault ruptures. You can find out more by watching the video. A few kilometres down the road you turned off the main highway and crossed from the Pacific Plate to the Australian Plate over the actual Alpine Fault. I had expected a more impressive place but erosion has made the fault scarp smaller so all that could be seen was what looked like a five metre rise in the land.

Sam talked about how many kilometres of the fault scientists expect will rupture in the next earthquake and it’s likely to be several hundred kilometres so it is important to make sure people are prepared for such a big event. Tomorrow we will look at how an earthquake like this can trigger landslides and other geohazards. 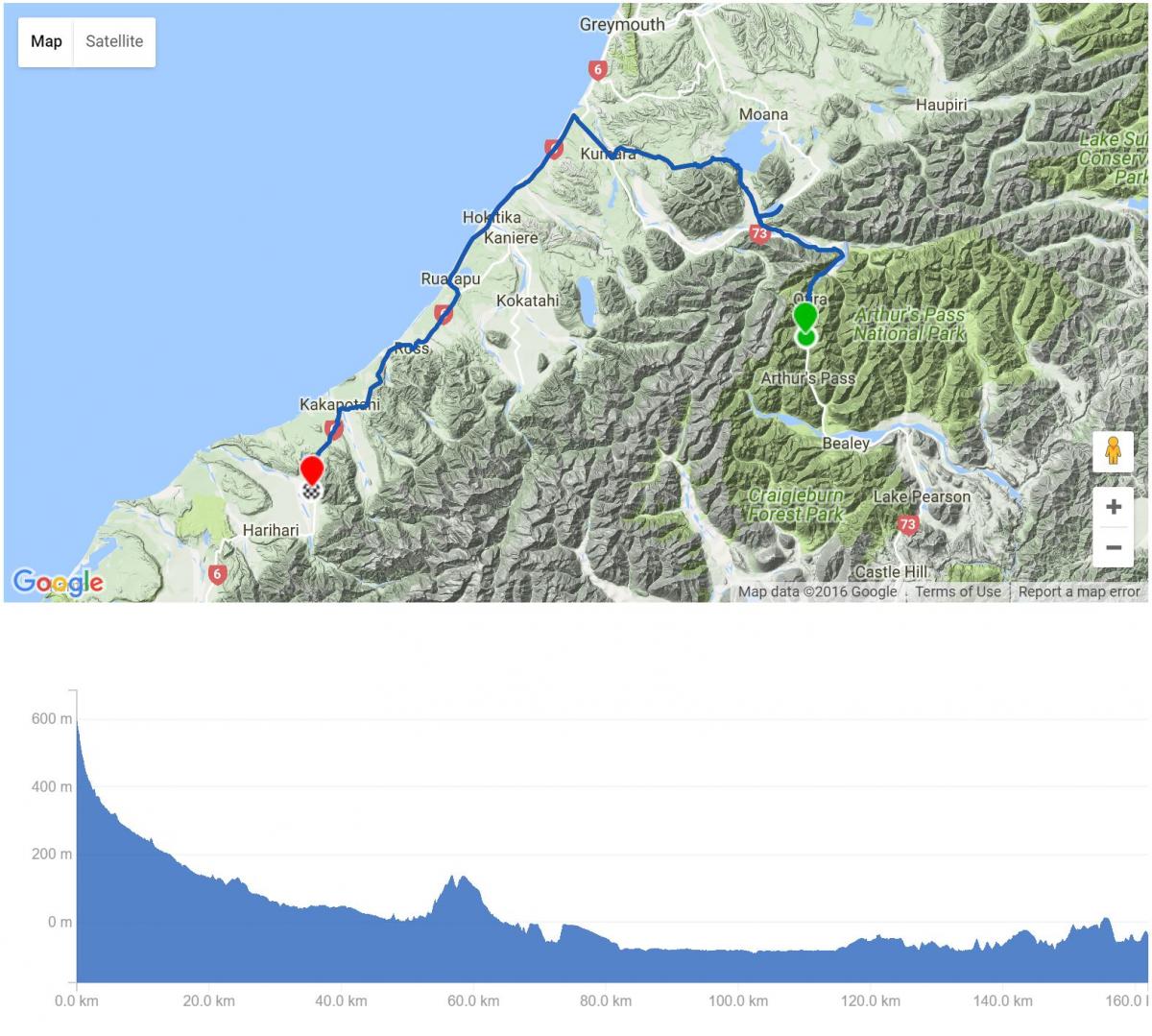 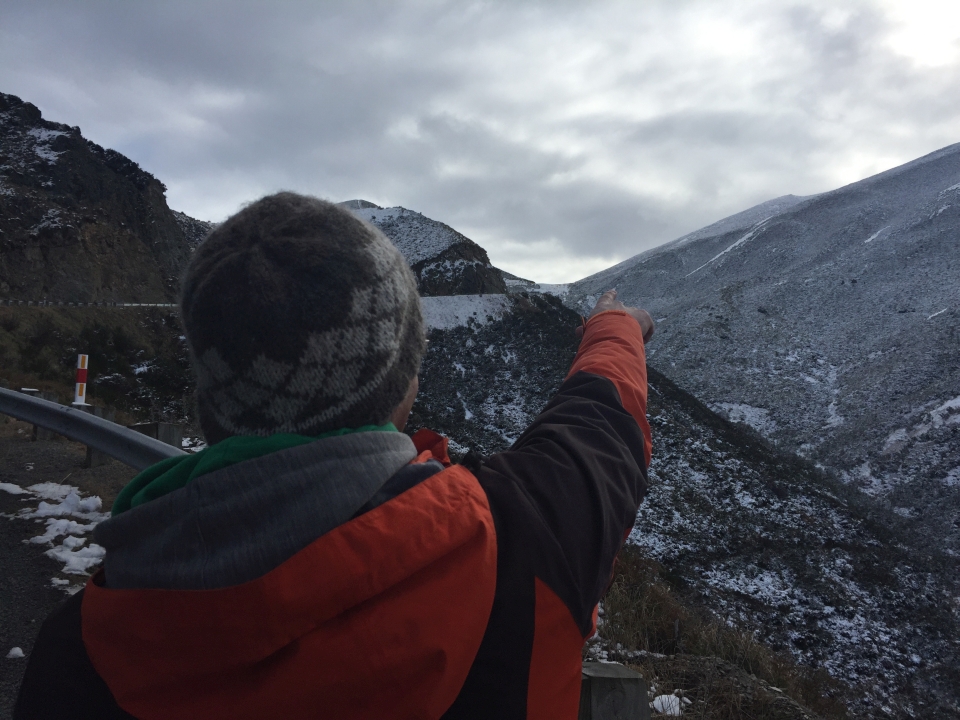 Sam points out the Porters Pass Fault trace near the pass on the way to the West Coast. Image: LEARNZ. 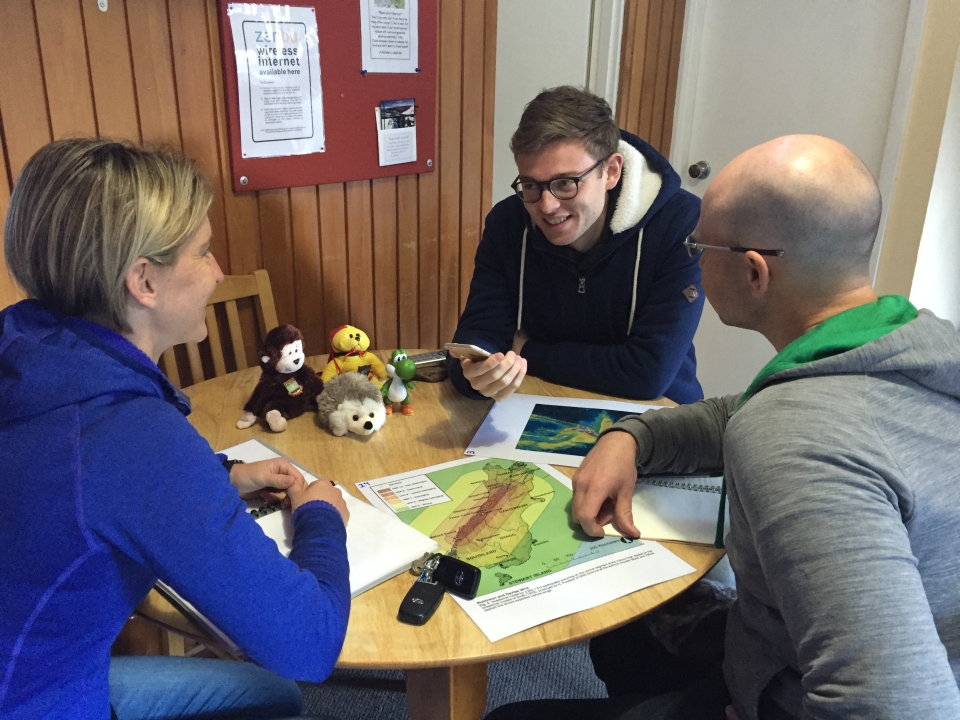 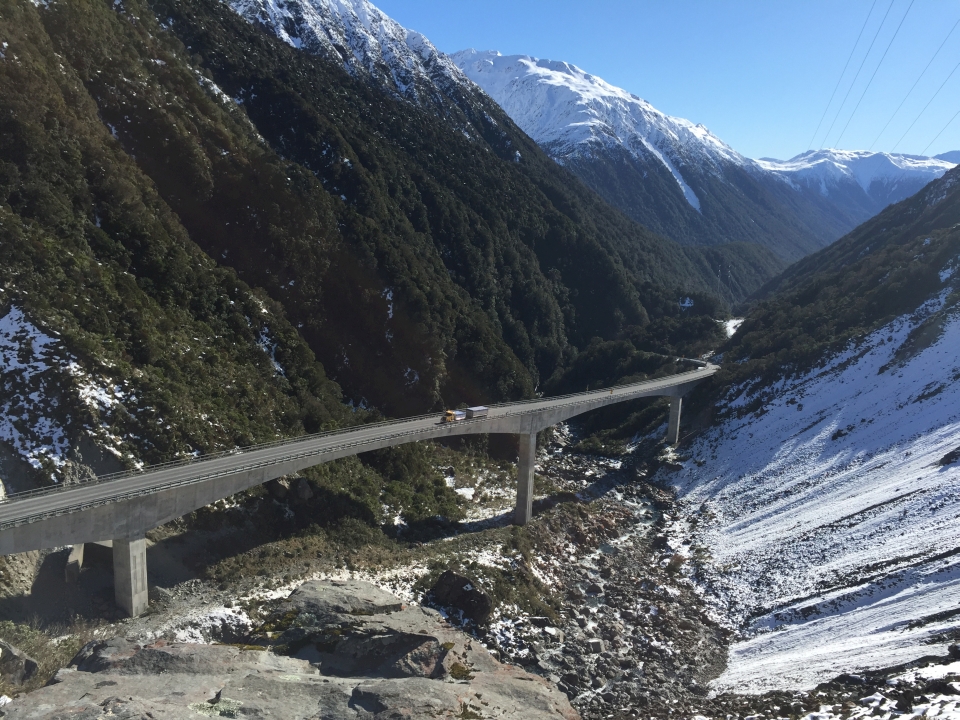 The Otira Viaduct was built to avoid a large landslide and provide a more reliable road link to the West Coast. Image: LEARNZ. 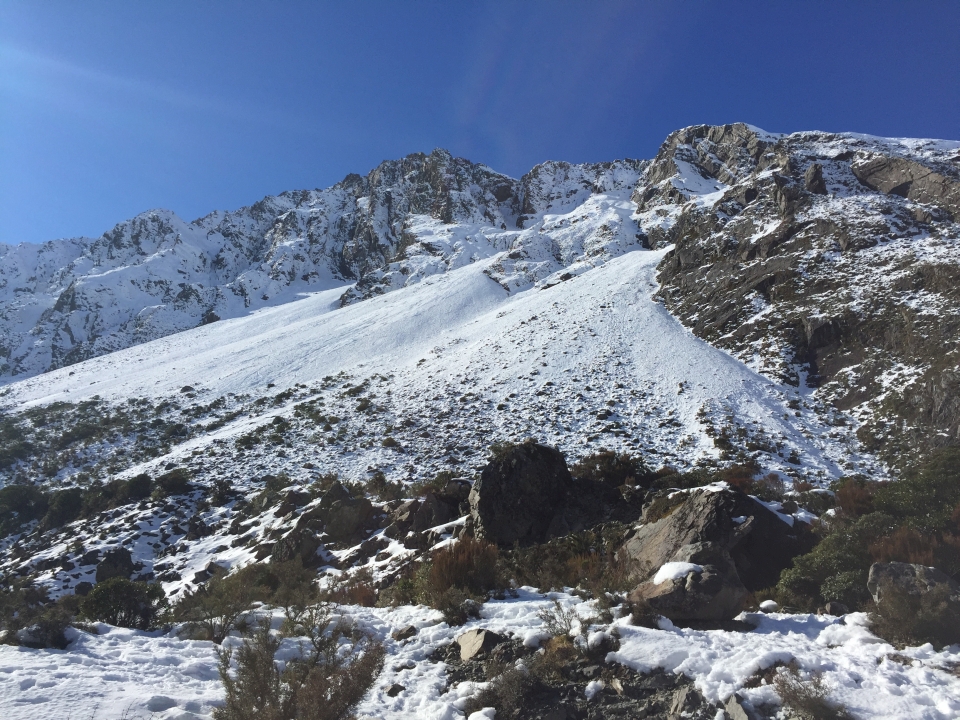 The old road used to go through this scree slope before the viaduct was built. Can you find out how the viaduct was designed to withstand movement caused by earthquakes? Image: LEARNZ. 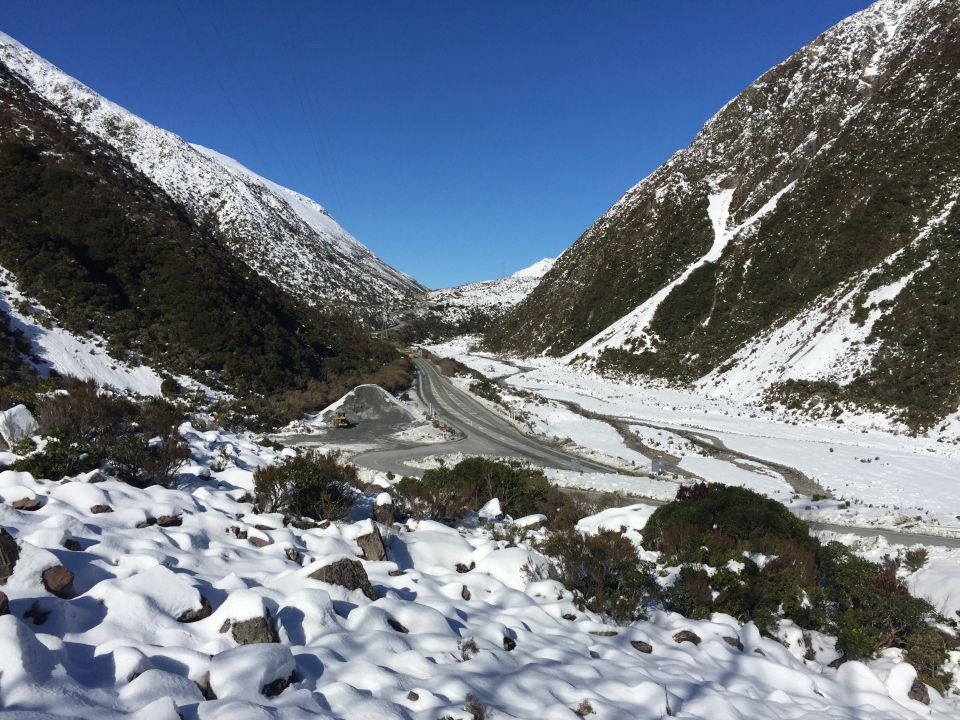 Looking back towards Arthur's Pass. What other roads link the East Coast with the West Coast in the South Island? Image: LEARNZ. 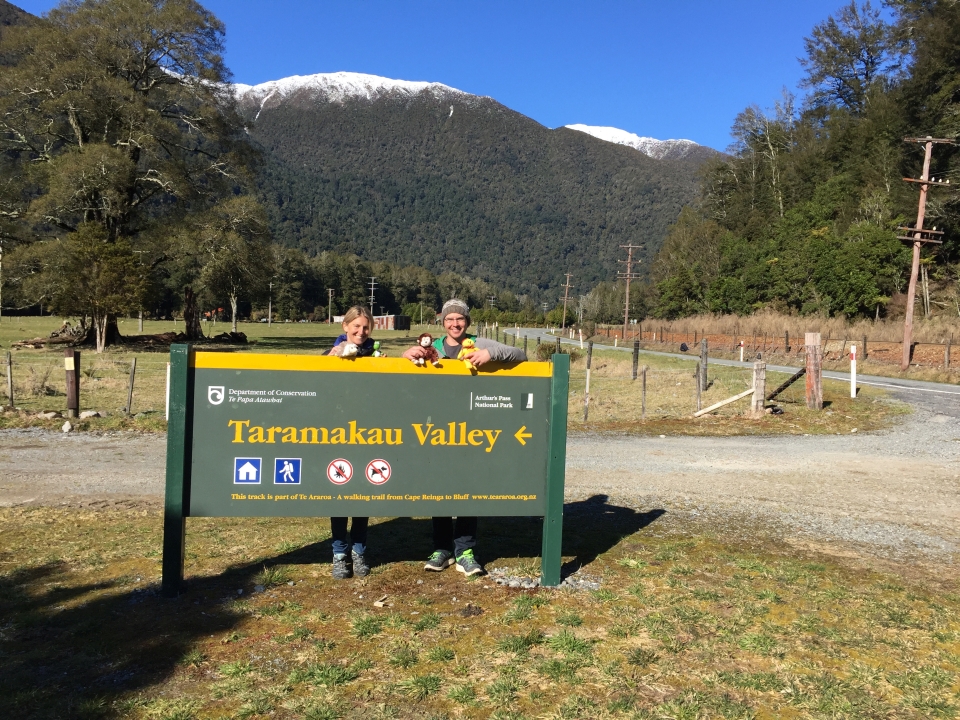 Sam shows Shelley and the ambassadors where the Alpine Fault meets the Hope Fault at the Taramakau River. Image: LEARNZ. 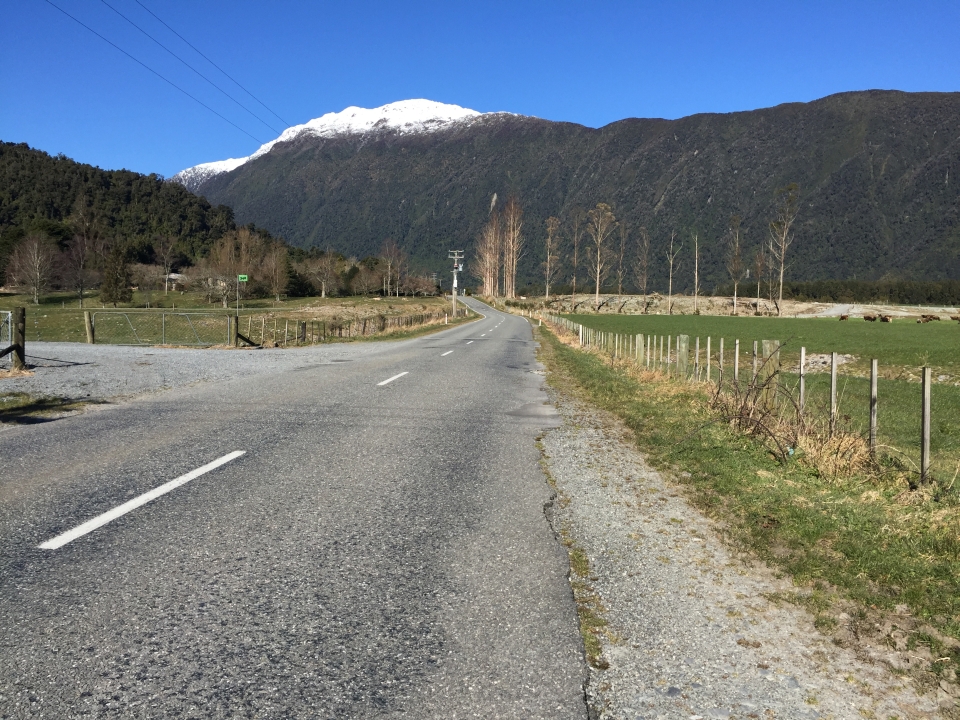 Looking back towards the Alpine Fault scarp. Can you see where the fault is? Image: LEARNZ. 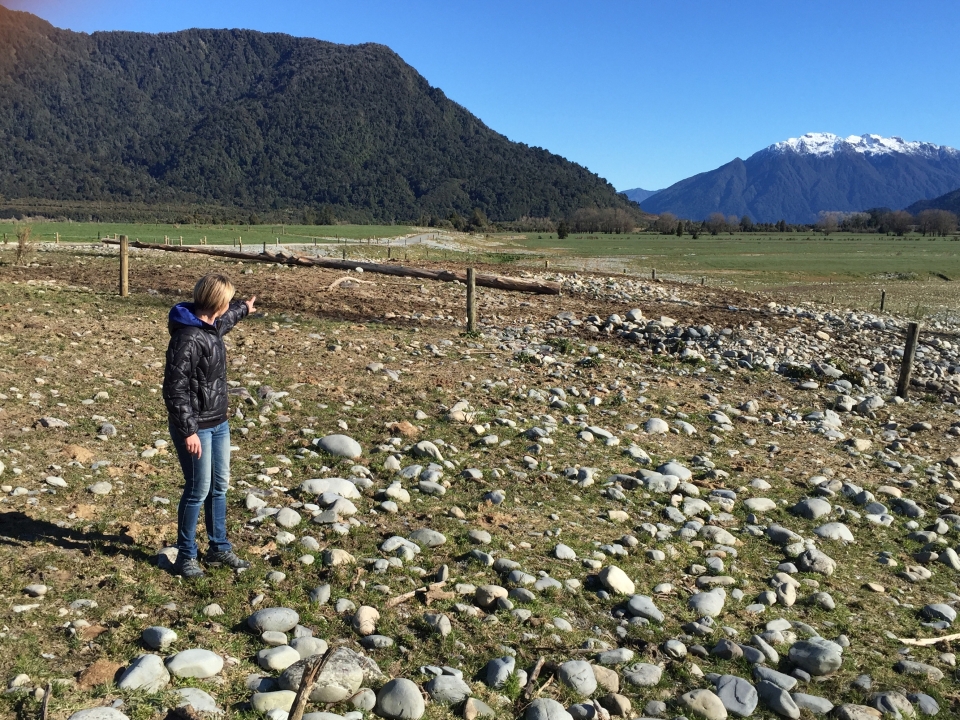 Shelley points out the Alpine Fault Scarp which can be seen as an area of land uplifted on one side of the fault. Image: LEARNZ. 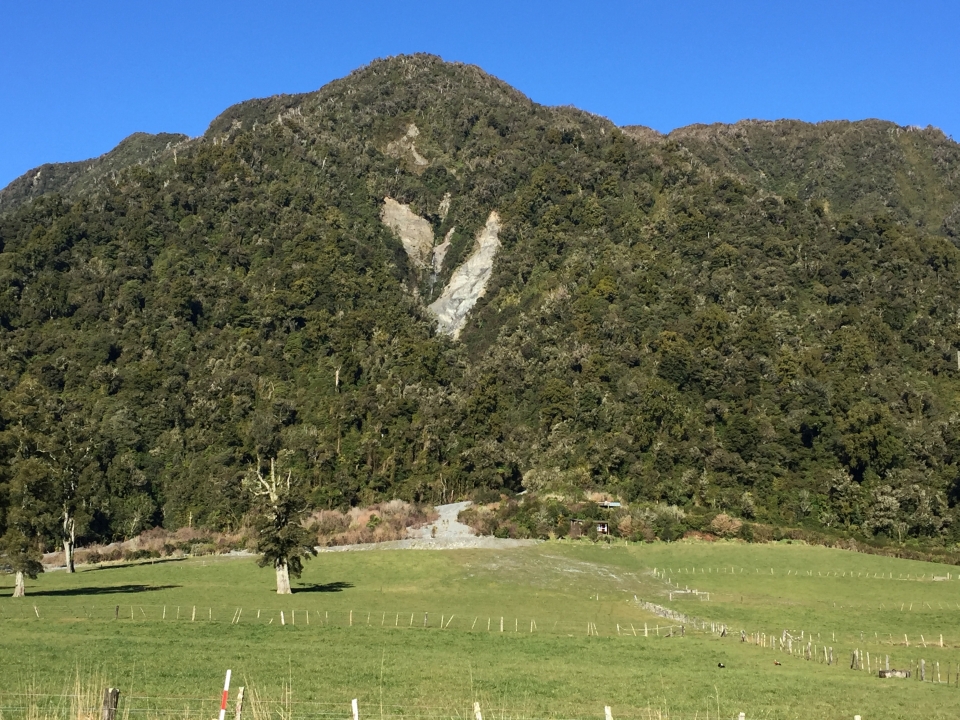 Landslides are common on steep hills like this. What do you think triggered this? Image: LEARNZ.