Date:
Wednesday, August 10, 2016
Field Trip Name:
Geohazards
Field Trip Place:
West Coast of the South Island
Weather:
Fine and sunny
Where You Are:
In and around Hari Hari

Hari Hari on the West Coast is the perfect place to investigate geohazards. This town is only about a kilometre away from the Alpine Fault and close to the coast so there is evidence of earthquakes, landslides and tsunami in many places throughout this region. Today Sam Hampton and Alistair Davies will take you to some of these places to have a closer look.

The most dangerous geohazards

Before you hit the road in search of evidence of geohazards you spoke to Bream Bay College during the audioconference. The ambassadors were impressed with the questions that students had come up with and Louie enjoyed catching up with his class. Caleb asked which geohazard is the most dangerous and both Sam and Ali had different answers. They had spent some time debating this question before the audioconference and could only agree that the most dangerous geohazard is the one that is most likely to happen without warning in the area where you live. This is why it is so important to learn about what geohazards are present in your local area and how to prepare for these. You can listen to the audioconference to learn more.

Following the audioconference you went outside to enjoy the sunshine. Sam took you to an area where a large landslide had occurred close to the Alpine Fault. At first it was hard to see what Sam was talking about but as he pointed out the shape of the hill and the change in the vegetation you could see where a huge area of land had slid down the hillside. It is likely that this landslide was triggered by an earthquake on the Alpine Fault. Not all landslides start in this way, some are triggered by heavy rain, floods, cycles of freezing and thawing or even by people when they dig into a slope. Seeing this large landslide scarp made me realise just how much land can move in a landslide and how damaging an earthquake can be in an area with steep hillsides. Sam explained that landslides will be one of the biggest problems created by the next Alpine Fault earthquake. You can watch the videos to find out more.

Ali has been looking at the different hazards that will be triggered by an Alpine Fault earthquake and wanted to show you an example of a different kind of landslide hazard. Ali took you to an area up in the Poerua Valley where a landslide occurred in 1999. This landslide was not caused by an earthquake but so much rock came down the valley that it blocked the river creating a dam. This dam eventually broke and rock and water flowed out down the valley destroying the farmland below. Landslide dams are common in the mountains and will be a huge risk following a large earthquake because they break without warning and are a threat to anyone living in the valleys below. Watch the video about this.

Sam took you out to the edge of Lake Brunner to talk about tsunami. Tsunami can be triggered by any large movement on the seafloor such as during seafloor earthquakes, submarine landslides (slides of material on the seafloor) or volcanoes under the sea. Large island volcanic eruptions and even meteor impacts can also trigger tsunami. Earthquakes are the most common cause of tsunami but thankfully not every earthquake under the sea is capable of causing tsunami. Earthquakes generated by a subduction zone cause the largest tsunami because one side of the fault moves up while the other moves down, displacing more water. This is what happened in Japan when a magnitude 9 quake off the shore created a devastating tsunami back in March 2011. Tsunami don’t just happen on the coast. Sam told you about lake tsunami caused when land slides into a lake creating a wave. Long lakes, harbours and sounds surrounded by steep hills are prone to tsunami so Lake Wakatipu in Queenstown and Milford Sound could be affected by large tsunami. Watch the video to find out more.

Tsunami on the West Coast

Your mission to find out more about tsunami would not be complete without a visit to the beach so Sam took you out to Ōkārito near Franz Josef. The lagoon here is famous for kōtuku or white heron and was a stunning place to visit. You could just see the tops of Aoraki Mount Cook and Mount Tasman peeking out from above the forested hills. This area like most coastal areas of New Zealand has had tsunami in the past. Scientists know this by looking at tree ring evidence and changes in sediment. Tsunami in this area could be caused by a large earthquake sending huge landslides into the sea or causing landslides under the sea. The southern section of the Alpine Fault also extends out to sea so it too could cause a tsunami if that part of the fault ruptures.

Now that you have looked at the causes and effects of earthquakes, landslides and tsunami you are ready to think about how you can better prepare for these geohazards. Tomorrow you will head to Franz Josef which sits on top of the Alpine Fault to find out what is being done to reduce the impacts of geohazards. 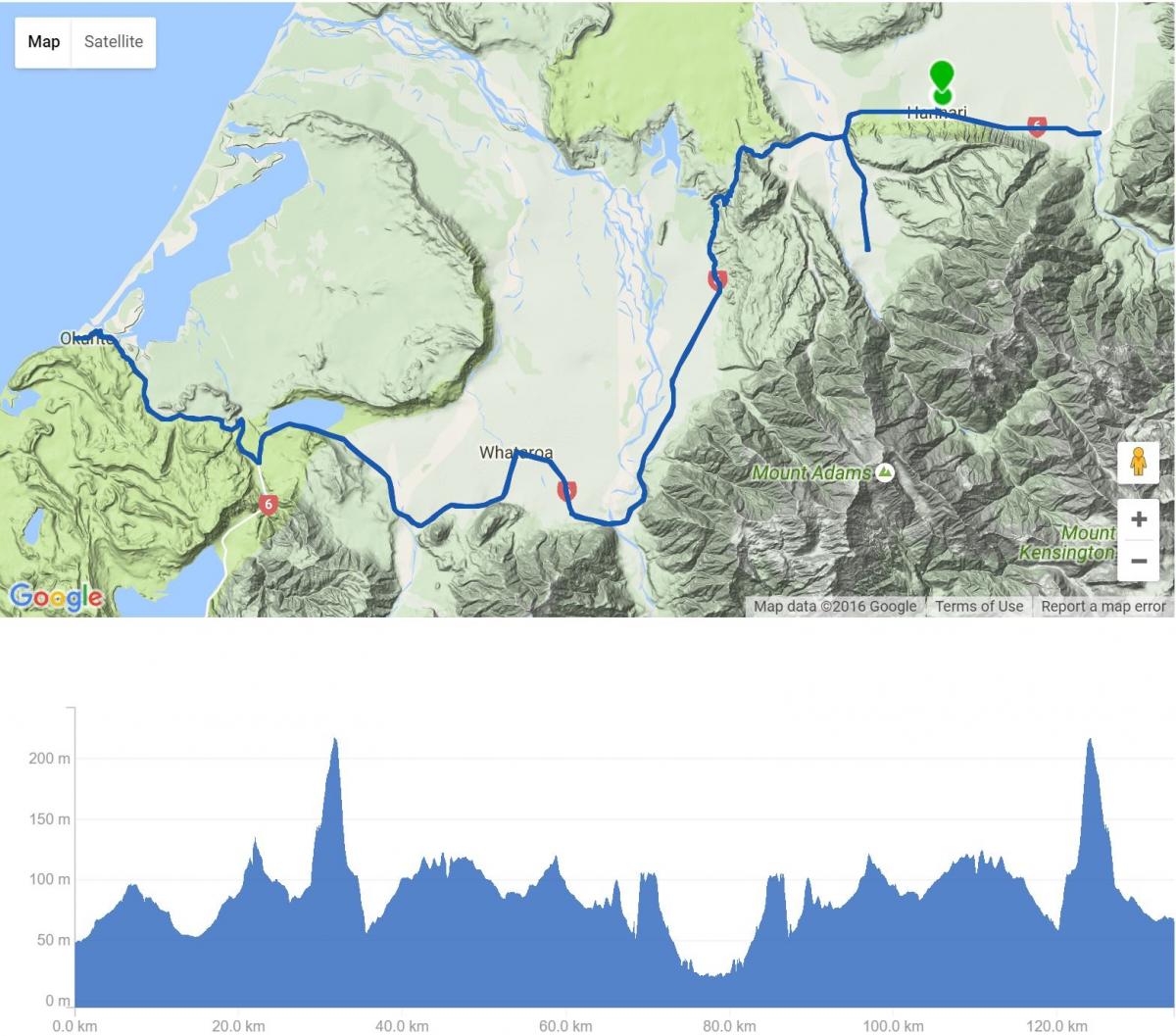 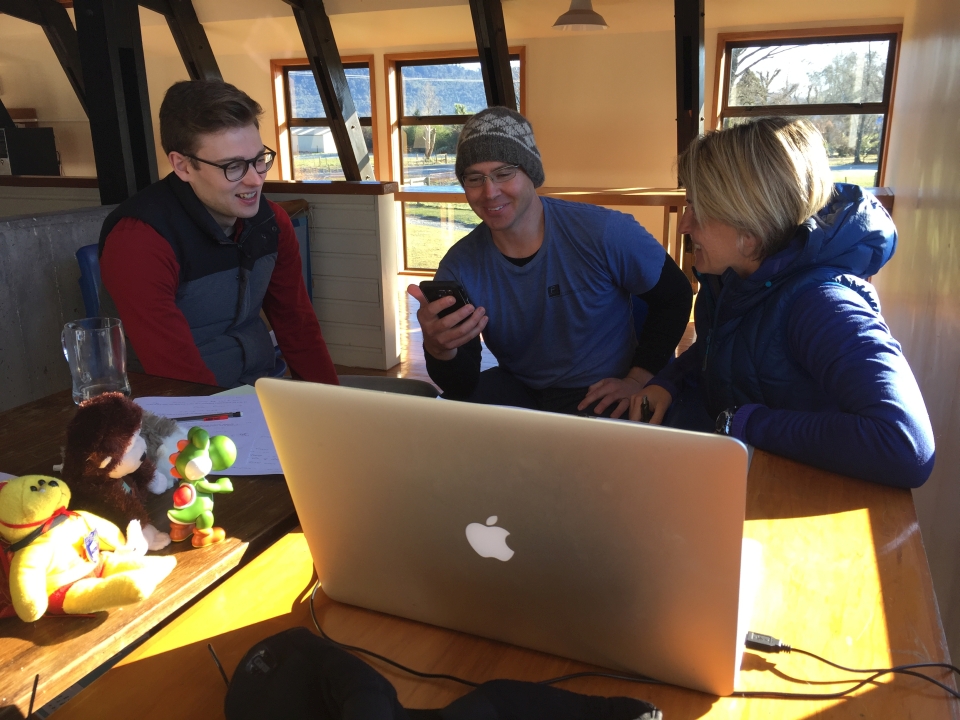 Alistair, Sam and Shelley talk to Bream Bay College during the audioconference this morning. Image: LEARNZ. 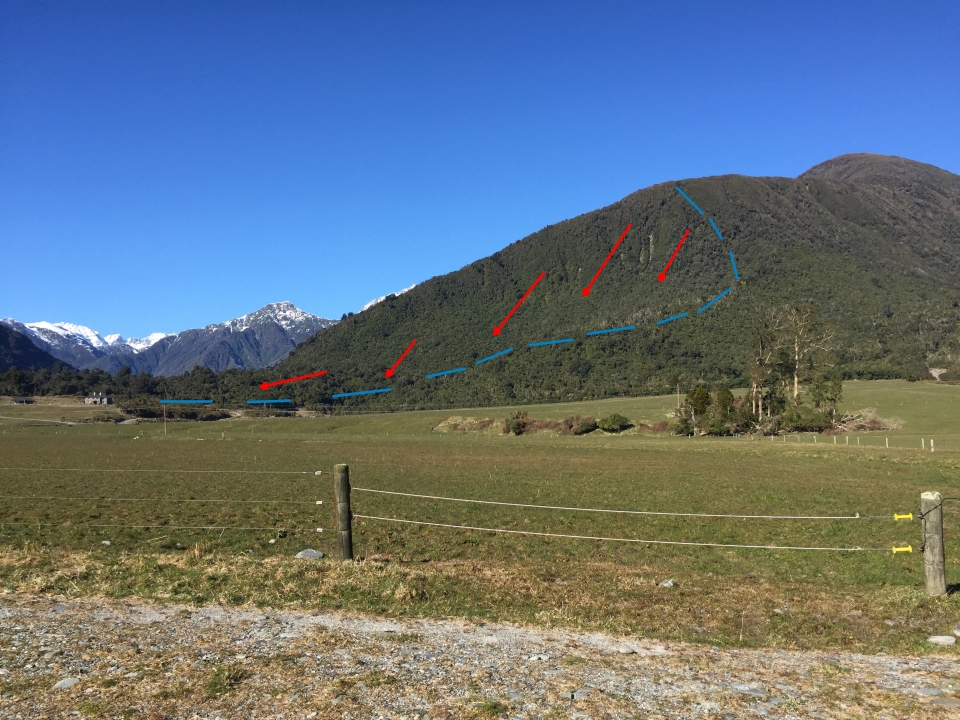 Sam takes you to an old landslide scarp, probably caused by the last rupture of the Alpine Fault back in 1717. Why is the landslide no longer that noticeable? Image: LEARNZ. 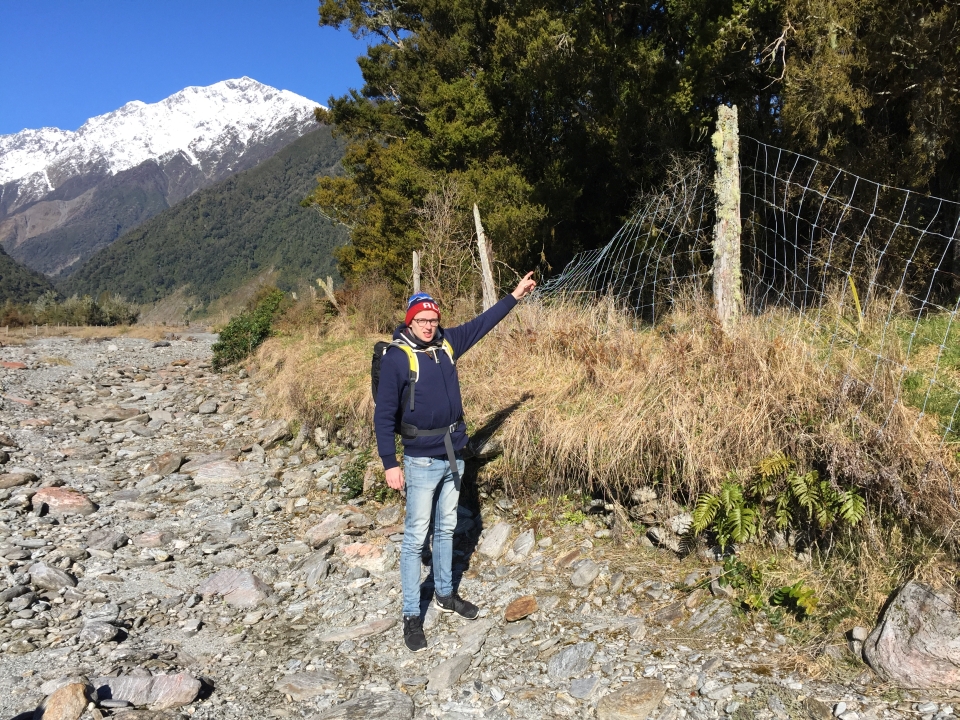 Ali points out an old deer fence showing where once productive land has been damaged by a landslide dam flood. Image: LEARNZ. 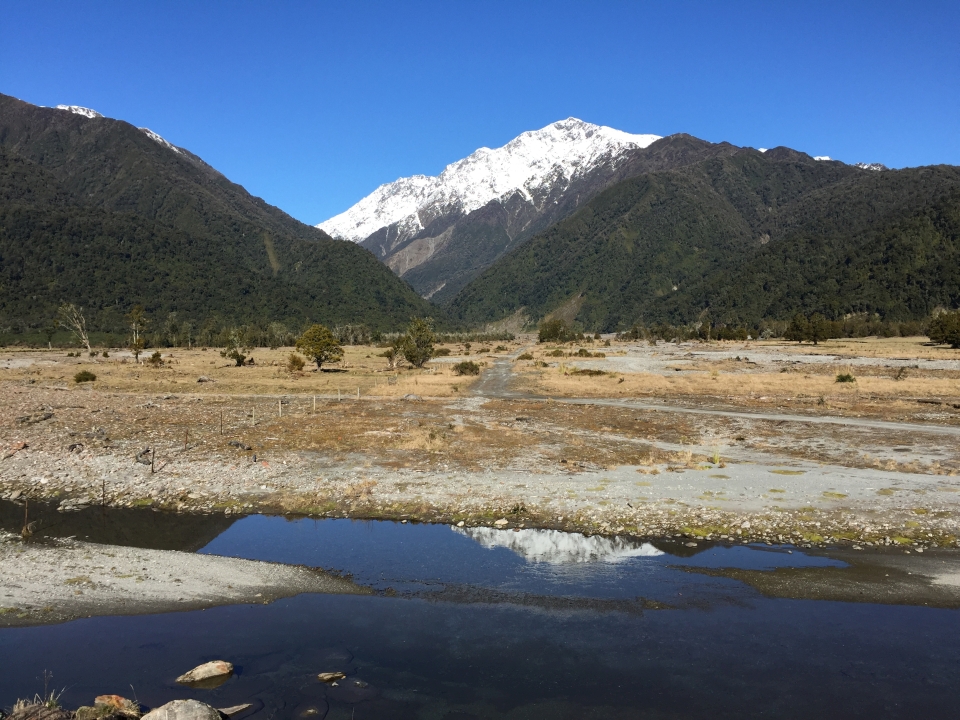 This valley used to be farmland until a landslide blocked the river up valley and then this dam broke sending rock and water down into the valley. How do you think the risk of events like this can be reduced? Image: LEARNZ. 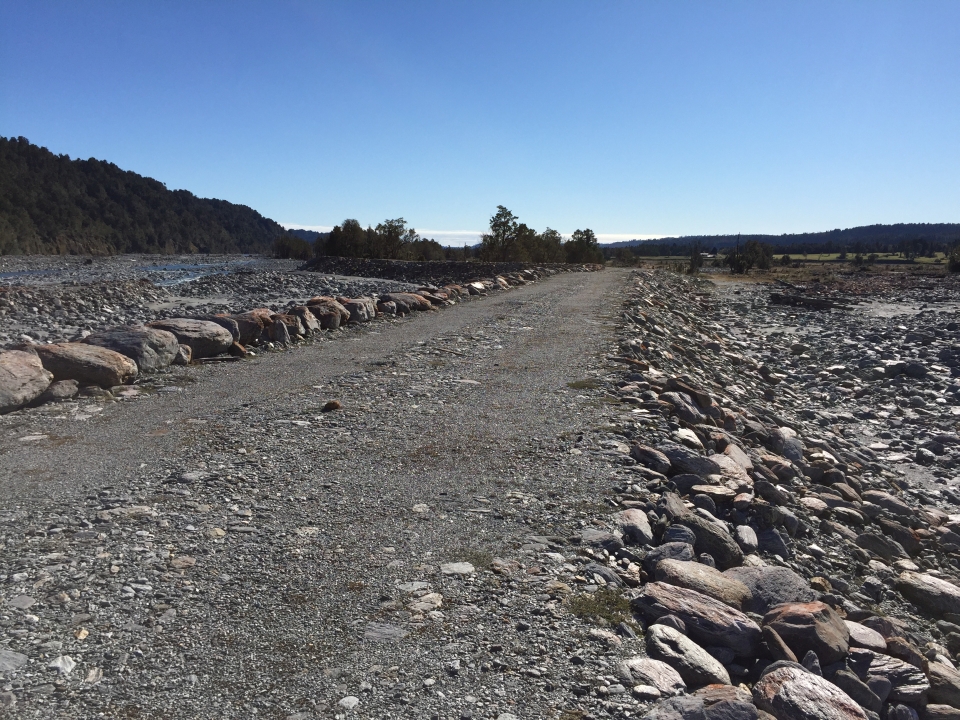 Stop banks like this can be built to try and keep the river from shifting its course. Image: LEARNZ. 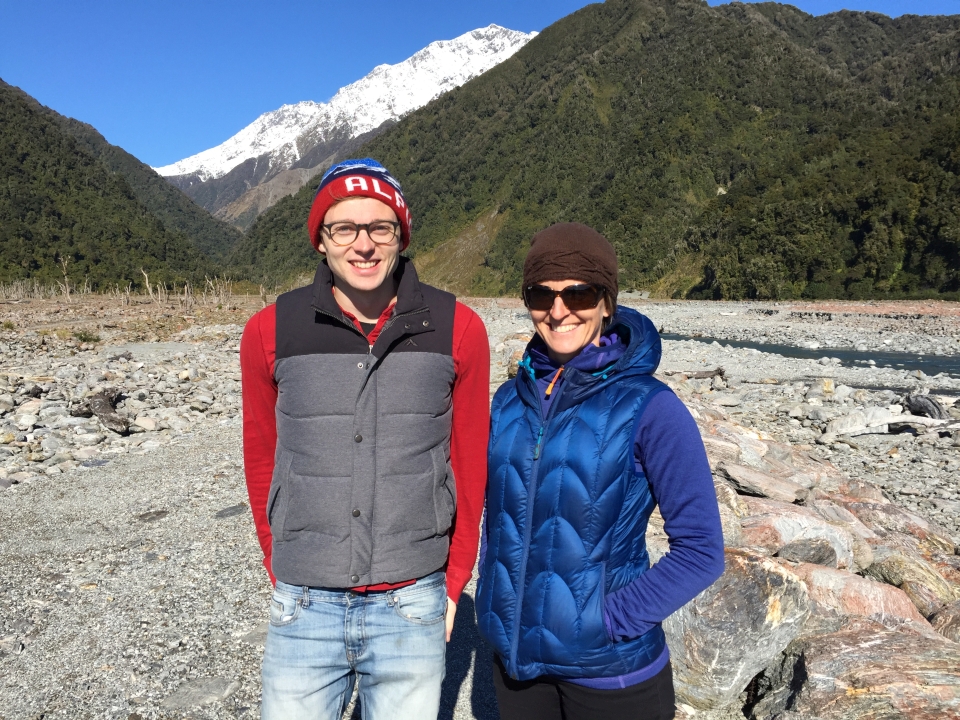 Alistair shows Shelley some of the affects of landslides in the Poerua Valley. Image: LEARNZ. 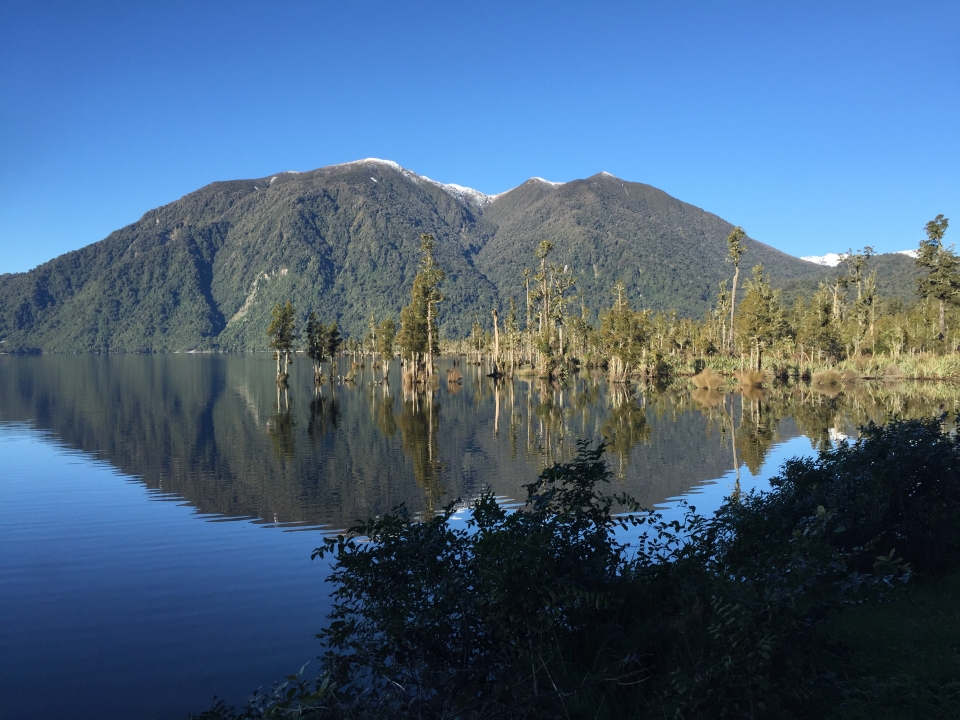 Tsunami don't just happen at sea they can also happen on lakes when landslides spill into lakes and cause a large wave or surge. Image: LEARNZ. 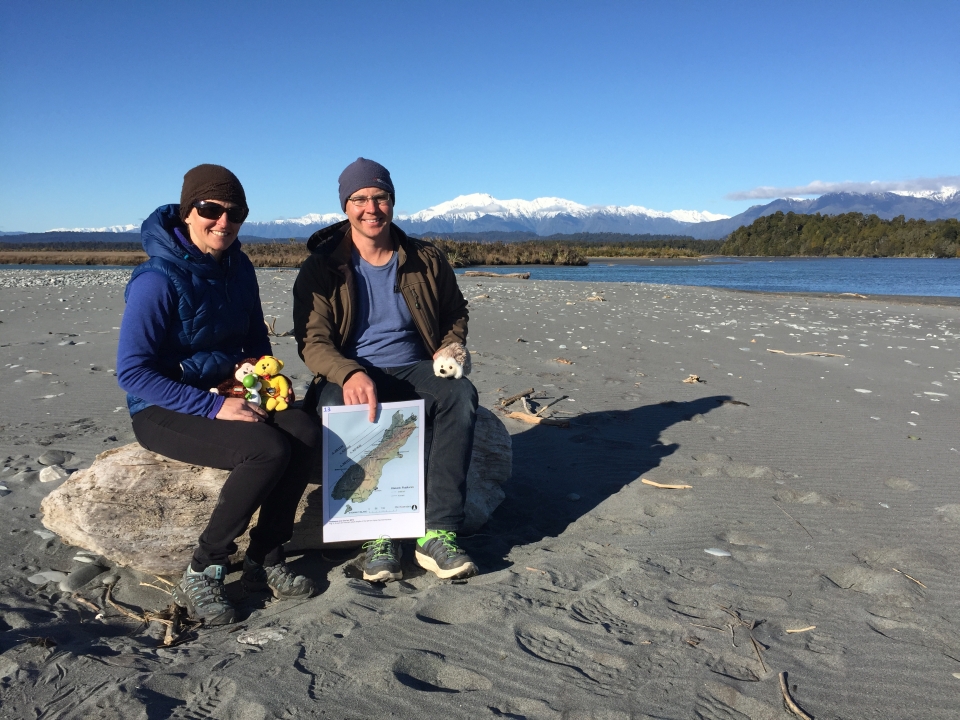 Shelley and Sam talk about tsunami risk on the West Coast. What could cause a tsunami here in Ōkārito? Image: LEARNZ.