«Previous
Living Beneath the Sea ice
Contents: Easy
Next»
Cool science in action
Standard Version
Listen:
Listen to this page

The Antarctic sea ice is home to a group of simple plants that play an important part in the Antarctic marine food web. This group of plants are known as SIMCO or Sea Ice Microbial Communities.

The frozen seawater of the Antarctic seems like a place where not many things could live. Yet, this cold place has a surprising amount of plant life living within it.

A microorganism is a tiny plant or animal that can only be seen by people using a microscope. These organisms can be made up of just one cell or have lots of cells.

Microorganisms can live just about anywhere, including soil, hot springs, on the ocean floor, high in the air and deep inside rocks.

Microorganisms are important because they recycle nutrients by breaking them down.

Microorganisms live on the underside of sea ice in Antarctica and include;

Together, these organisms make up the sea ice microbial community or SIMCO.

SIMCO have adapted (changed over a very long time) to the cold of Antarctica and are an important part of the food web.

Sea ice is always changing as it melts in summer and grows in winter.

Salt can be forced out of sea ice over time and can collect at the bottom of the sea ice. This salt is full of nutrients that attract salt-loving microorganisms. So SIMCO are mostly found in the bottom layer of ice. SIMCO form the base of the food chain, they are food for krill, which are eaten by fish.

Below the sea ice in Antarctica it is very cold.  Scientists believe that microorganisms have a special gel-like coating which stops them from freezing.

How could you test the theory that microorganisms living in sea ice have a coating to stop them from freezing?

There are still lots of questions about sea ice microorganisms. Scientists want to understand which animals eat these microorganisms and how much they eat. If scientists can answer these questions they will be able to see how other animals like penguins and seals will be affected if the sea ice melts.

Find out more about SIMCO and what scientists have already found out about them. 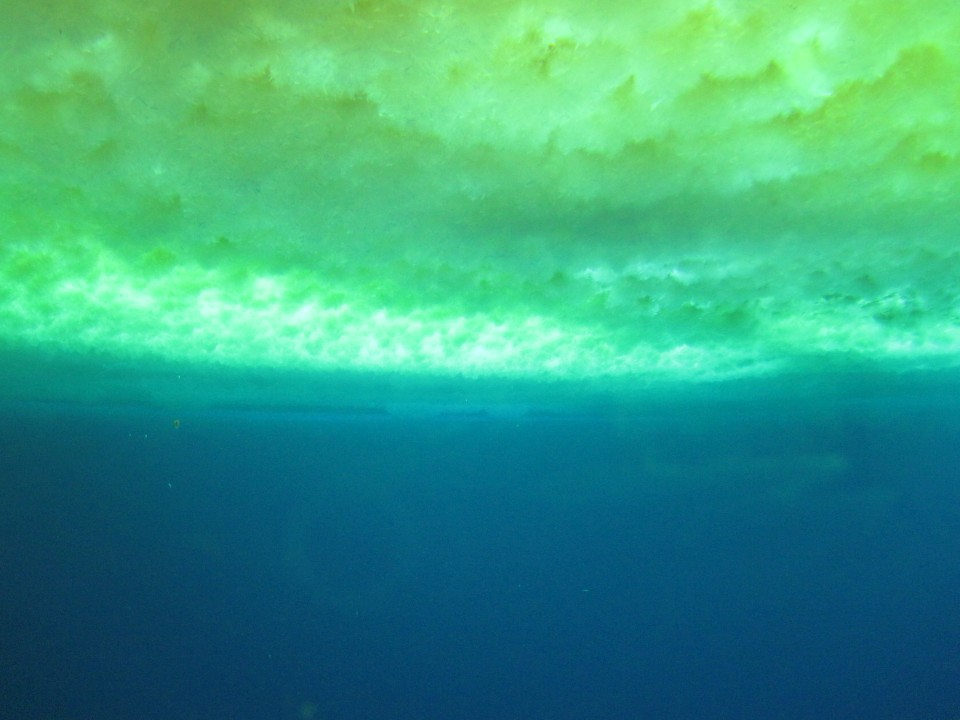 The underside of sea ice in Antarctica is green because of the algae that grows on it. Image: LEARNZ. 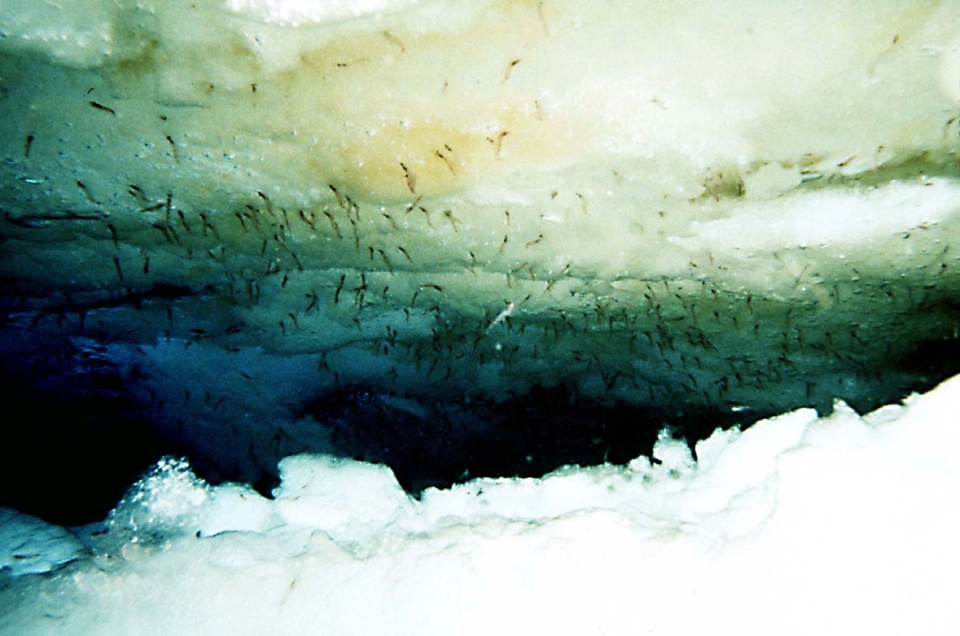 Antarctic krill can be seen feeding on the ice algae. Image: Kils & Marschall. 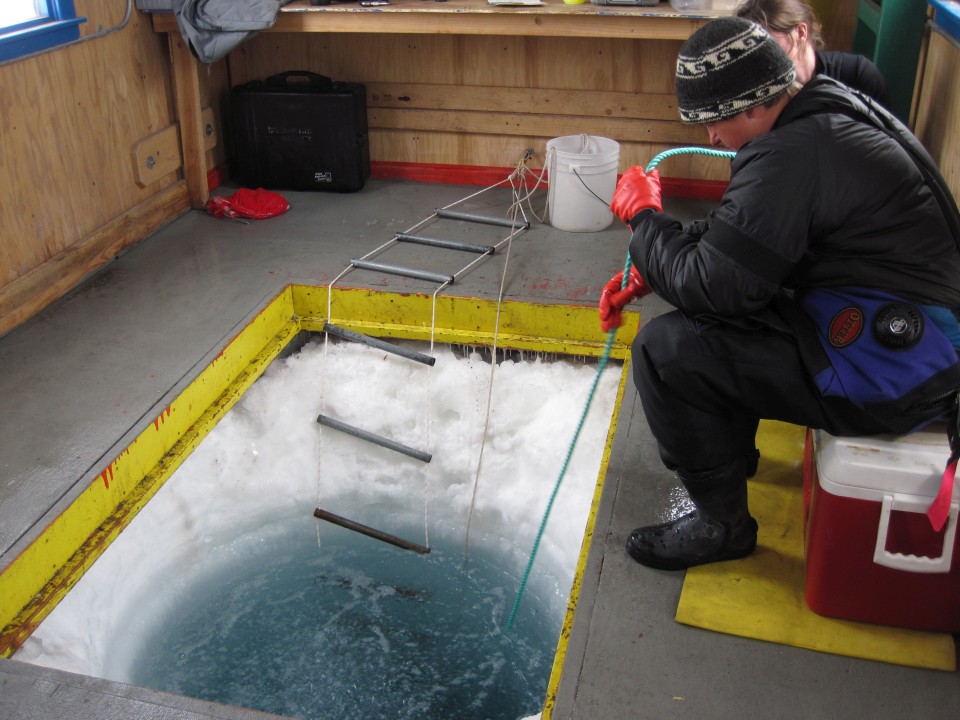 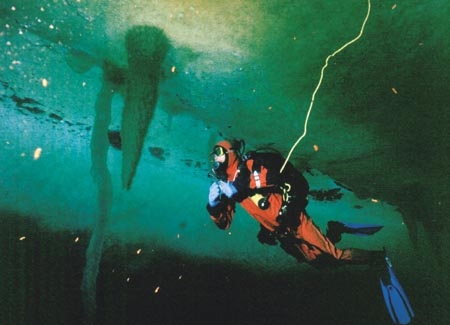 All divers are tethered to the surface during a dive below the sea ice for both safety and communication reasons. Image: R.Budd (NIWA). 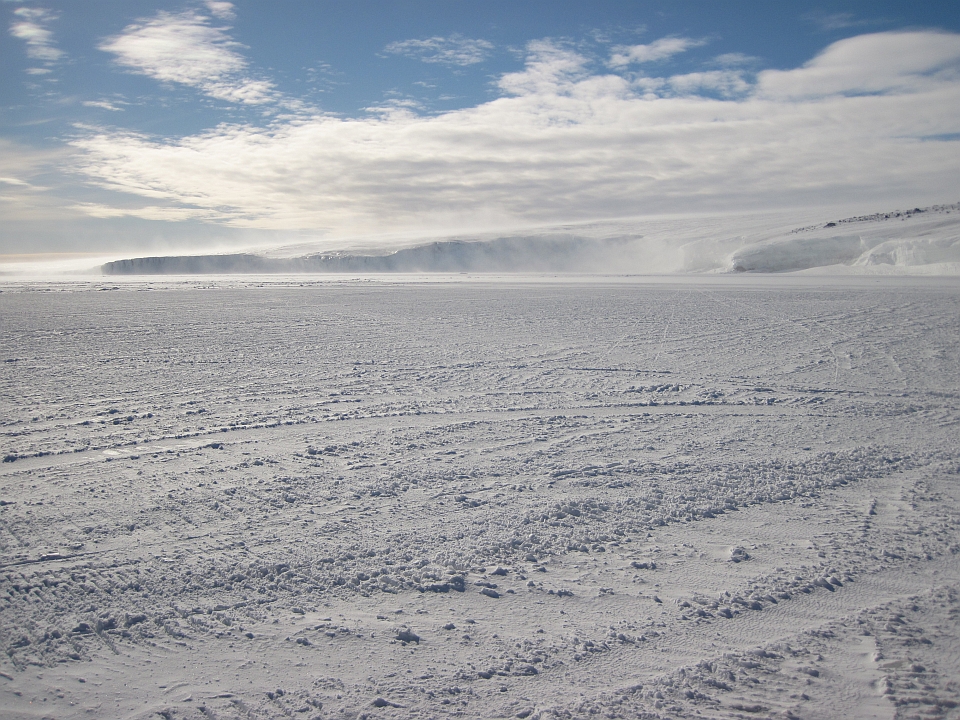 Sea ice provides a unique ecosystem for marine plants and animals below the ice. Image: LEARNZ.