Well you saw a bit more of Auckland today, with a trip to Orewa and North Head in Devonport. Luckily the weather was kind to us once again.

Our first stop was at the council building in Orewa for the second audioconference. Once again we had Picton School and Pukekohe Intermediate putting their questions to our expert, Hamish Keith.

The only way is up

From the council offices we went for a stroll down to Orewa beach. Orewa is particularly vulnerable to tsunamis. An earthquake in the Kermadec Trench could generate a tsunami that would take around an hour to reach Orewa Beach, although one resulting from a more distant source, such as in Chile, would allow for many hours’ warning.

Hamish said that the consequences of a large tsunami would be devastating and everyone needs to be prepared. It is vital for people living in the area to have an evacuation plan and know their nearest safe zone, which is generally on high ground – and this applies to anyone living near the coast in New Zealand.

Hamish also said that a tsunami may not come with an official warning, so people must act on natural warnings and head to high ground if they feel a long or strong earthquake or see unusual wave and tidal processes such as sudden water retreat or unusual currents. Our Stan certainly gave a good demonstration of what to do in this instance – check out the video!

From Orewa we travelled to a bay near Takapuna Beach. Hamish wanted to show us an example of coastal erosion and discuss landslides. Coastal erosion in itself is a hazard, which can also lead to landslides. Although it is a natural process, the extensive urbanisation of Auckland – an area with 3100km of coastline - has resulted in exposure to hazardous shoreline and cliff erosion.

The ambassadors were amazed at the old tunnel entrance (you can see a photo to the right) that sticks out from the cliff face, highlighting the amount of erosion that has occurred there over the years. I wonder if there are similar examples near where you live. Or if you are not near the coast, maybe you know of an area where a landslide has happened. In the video Hamish explains what signs to look out for, and you could also read the Landslides background page.

Just down the road from Takapuna is Devonport. Here we made our way up Maungauika/North Head, which is in fact an old volcano. At the top we had excellent views of other Auckland volcanoes, such as Rangitoto, Maungawhau/Mt Eden, Takarunga/Mt Victoria, Ōrākei Basin – the list goes on!

Hamish explained that Auckland is vulnerable to volcanic eruptions. Much of Auckland is built on the Auckland Volcanic Field (AVF), which contains over 50 volcanoes. It is expected that these volcanoes won’t erupt again and any future eruptions will occur in new, unknown locations. Likely hazards and effects of the next Auckland eruption depend on what type of eruption occurs and for how long. Auckland is also at risk from ash fall from active volcanoes in the central North Island.

Again, watch today’s video for more detail or go to the Volcanoes background page for hints on being prepared for a volcanic eruption.

Our last two stops for the day were Ponsonby and Tāmaki Drive, where we discussed the dangers of earthquakes and storms. Auckland is not overly prone to earthquakes but like the rest of the country, it can take a battering by the weather at times.

Many of you have probably been in some sort of storm, so hopefully you have a few ideas for how to be prepared and stay safe if you find yourself in the middle of one. Storms can also lead to flooding and landslides, and loose objects tend to get thrown about easily!

Speaking of the weather, let’s hope we have another fine day tomorrow. 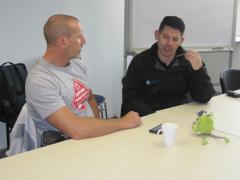 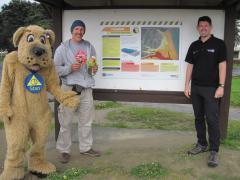 Andrew with Hamish and Stan next to the tsunami information sign at Orewa beach. Image: LEARNZ. 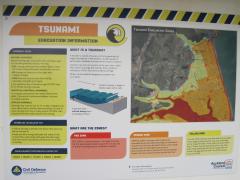 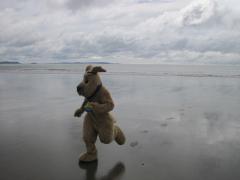 Stan demonstrates the direction to head should there be a tsunami warning. Image: LEARNZ. 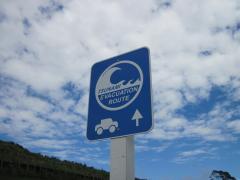 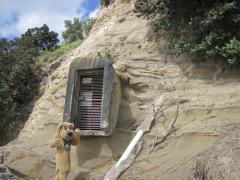 Here you can see the amount of coastal erosion happening along parts of the Takapuna coast. Image: LEARNZ. 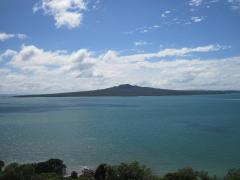 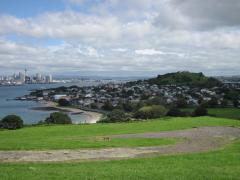 A view towards Auckland central city from Maungauika/North Head. Takarunga/Mt Victoria is to the right of the image. Image: LEARNZ. 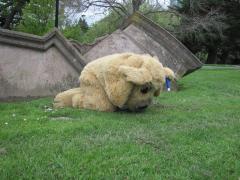 Stan demonstrates the correct action to take should you experience an earthquake - which I'm sure you know by now! Image: LEARNZ. 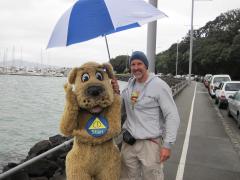 Andrew with Stan on Tamaki Drive talking about storms and other such dangerous weather events. Image: LEARNZ.