This morning the ambassadors and I went to Island Bay School. We were looking forward to seeing how well they did with their ShakeOut earthquake drill and tsunami hīkoi.

I felt like there should have been some excitement building for this morning’s ShakeOut earthquake drill and tsunami hīkoi. But everyone was just carrying on with their normal routine as though nothing special was happening. I guess if you live in a place like Wellington that is prone to earthquakes, practising for these events is a normal part of life.

And that’s the key really – to practise enough so in a real emergency, you can react quickly and without really thinking. The school’s readiness sure did show. It was an impressive display by all staff and students during the drop cover hold exercise. The tsunami hikoi was also good to be part of. The students filed up to a place called Victory Park and sat in their allocated lines with military precision!

After the classroom rolls were called and all the post-earthquake drill checks had been done, principal Deborah Fenton congratulated all staff and students for recording a new best time for the drill. Well done Island Bay School! Make sure to check out the video.

I wonder how your own ShakeOut drill went. Was it successful or are there things to work on? Even if there were a few hiccups that’s okay. The whole idea of a drill is to find your weaknesses and keep working at getting better.

Like I said, practising what to do more than just once will help you do the right thing even when a stressful event, such as an earthquake, is taking place.

A chat with some students and the principal

After the ShakeOut drill, I talked with some students about how they think the exercise went. I also quizzed them about the need to practice, and the sorts of things to do and not to do during an earthquake drill. Watch the video – I’m sure you will be impressed with their answers!

I also had a chat with the Principal, Deborah Fenton. I found it interesting that the school is actually an emergency hub for the whole community. Deborah also talked about how the school communicates to families regarding emergency information. But like Dan Neely said in an earlier video, Deborah encourages all families to have their own plans, because communication networks may not work during an emergency.

The final web conference for the week had more awesome questions from our listening schools. Thanks again to Dan Neely for answering them. I have really enjoyed this week’s web conferences. Even though this is the third in a series of three field trips on this topic, I have learned something new with each one. Check out the web conference recordings if you missed the live versions.

After lunch we drove out to the GNS Science building in Lower Hutt. We caught up with Graham Leonard one last time. Graham summarised the key advice for you all following the activities from this week. When you watch the video it’s a good idea to think about some areas of preparedness that you might need to work on with your whānau – I know I have some things to do when I get back home!

Thanks for being part of the field trip. 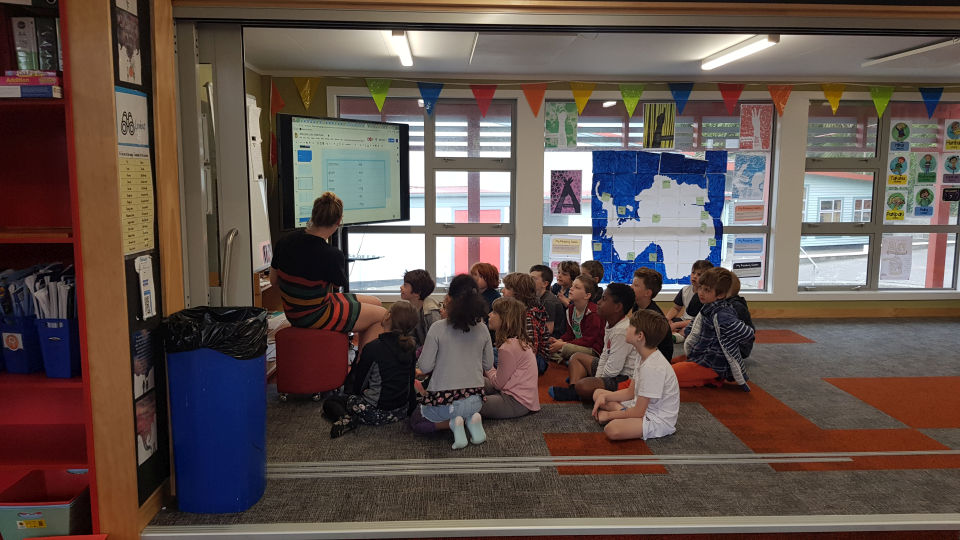 You don't know what you will be doing or where you will be if an earthquake happens. Image: LEARNZ. 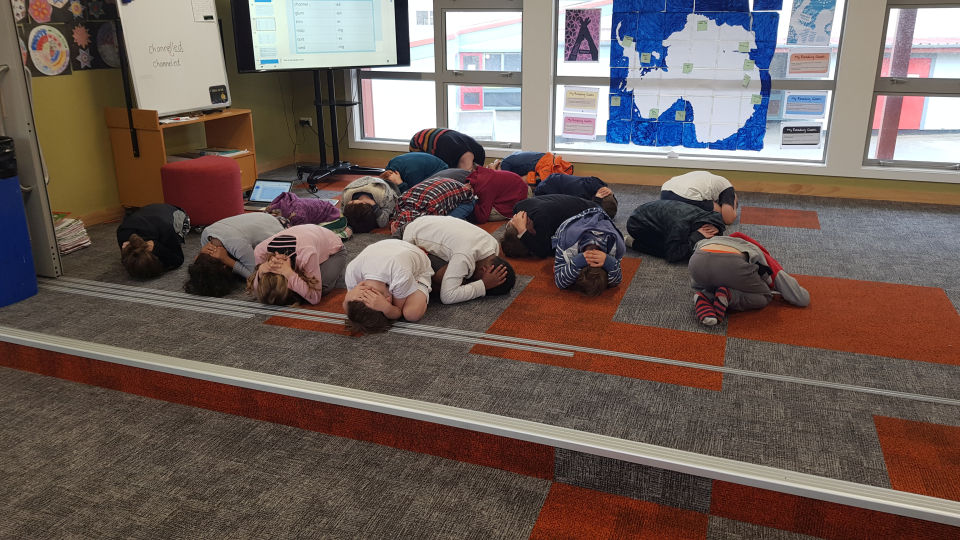 Wherever you are, Drop Cover Hold is the right action to take. Image: LEARNZ. 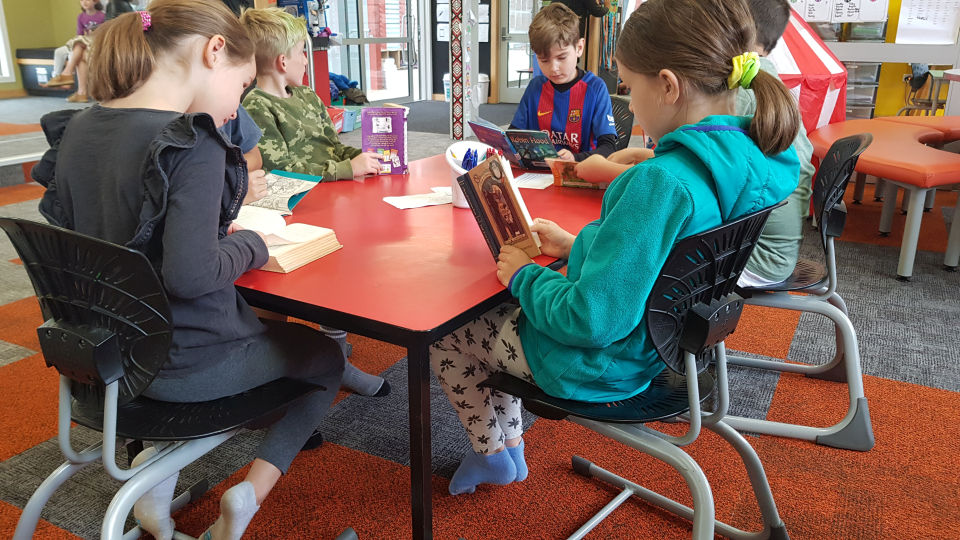 How do you think your reaction during an earthquake drill might be different from an actual event? Image: LEARNZ. 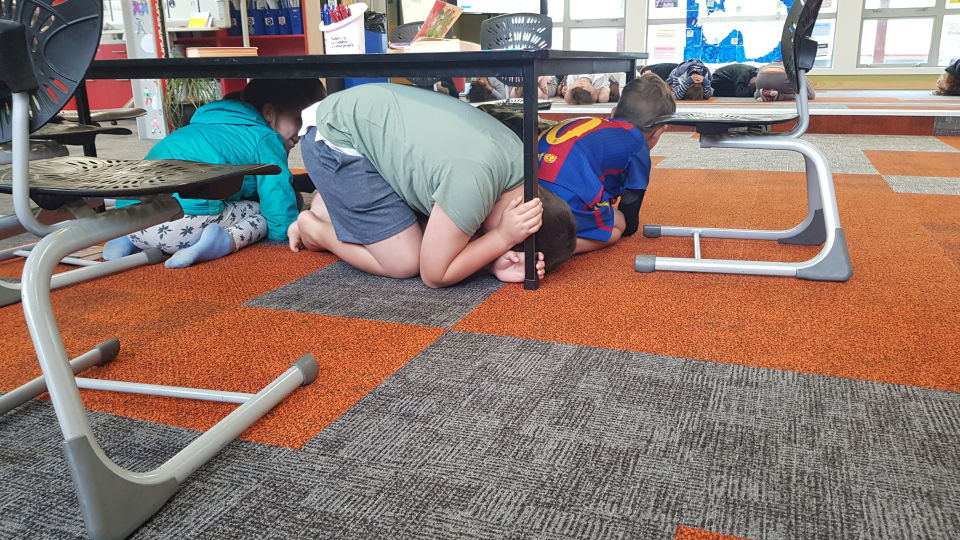 Practising Drop Cover Hold is all about learning and getting better at it. Do you think there is anything these students could work on? Image: LEARNZ. 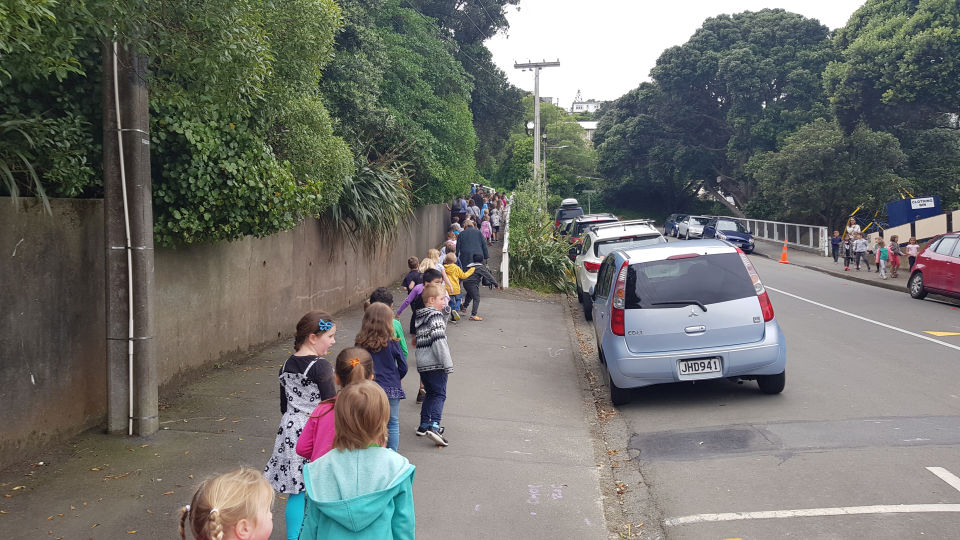 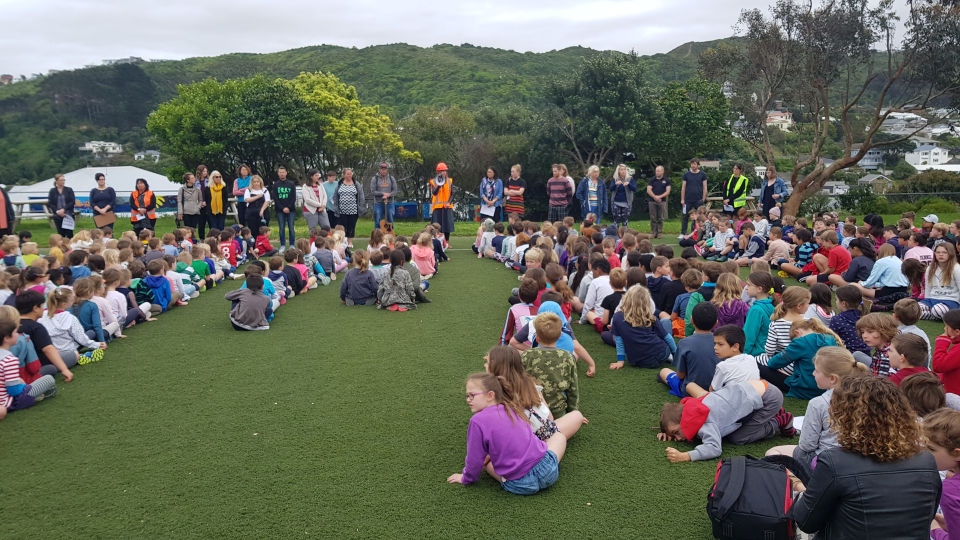 Island Bay School students assemble at the meeting point, where teachers take a roll call. Is this similar to how things are done at your school? Image: LEARNZ. 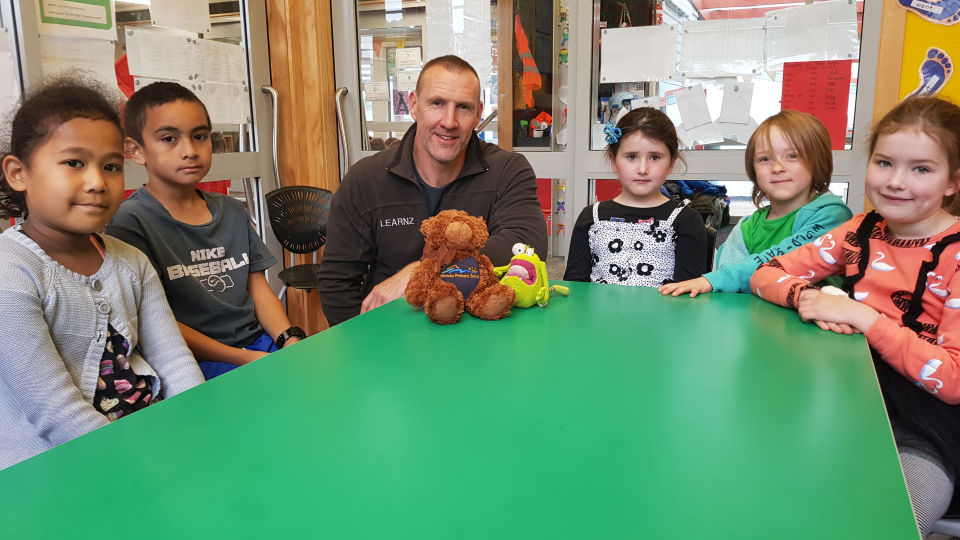 Andrew and the ambassadors with some of the Island Bay School students after the earthquake drill. Image: LEARNZ. 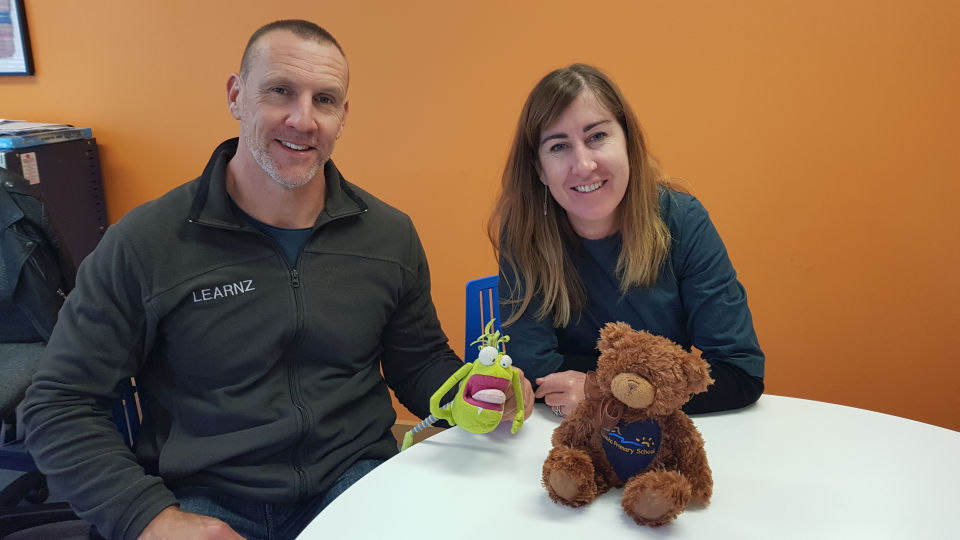 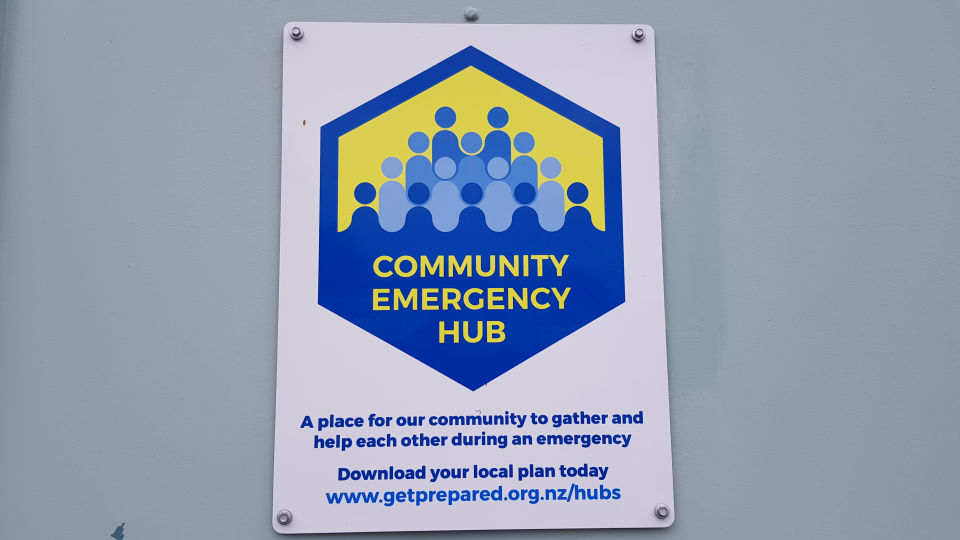 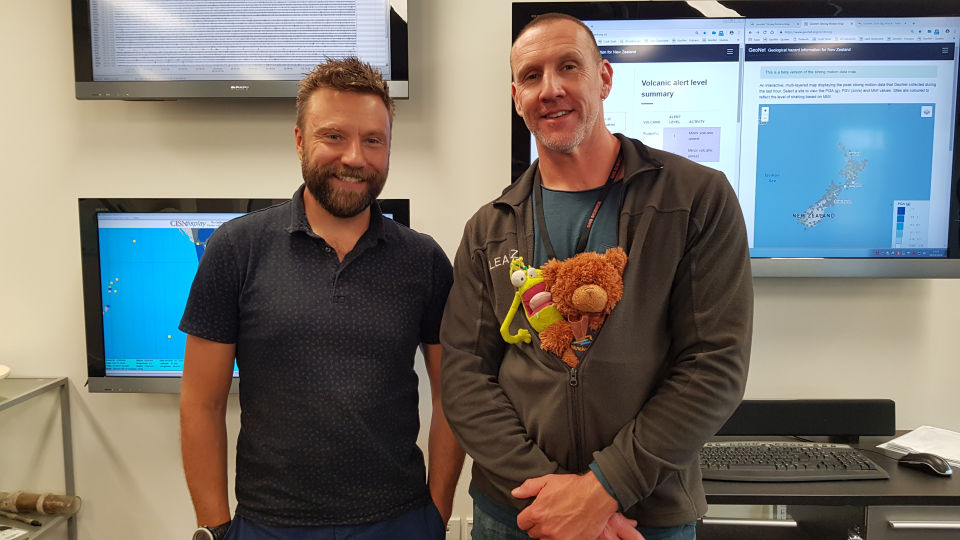 Andrew and the ambassadors finished the day at GNS with Graham Leonard. Here they are at GeoNet. Image: LEARNZ.