You may have woken early this morning to watch the America’s Cup final, wasn't it fantastic to see Team New Zealand win! It just shows you what a lot of hard work and some kiwi ingenuity can achieve.

After such an inspiring start to the day even the usual Auckland traffic didn’t make me grumpy. It took about half an hour to reach the centre of the city from Mount Albert where you met Marcus Pillay from Auckland Transport. Marcus was keen to share some of the work he has been doing on the Waterview Shared Path and answer questions during the web conference. Lynfield College and St Francis School had interesting questions about the project and why cycling should be encouraged. Marcus explained that people need to have choices and a city cannot function well if everyone decides to drive their own car everywhere. Public transport, cycleways and shared paths are just as important as building new roads. You can find out more by listening to the recording of this web conference.

Marcus took you out to Bollard Avenue to show you a section of the Waterview Shared Path which has been completed. You may have been surprised at how flash this path is. The path is 3.5 metres wide allowing enough space for walkers and cyclists travelling in both directions. The surface of the path is made of concrete so that it is easy to ride on and will not need much maintenance. Lamp posts line the path and make it safe to ride at night. Before this path was created the local community was divided by the motorway. Now the path and bridges connect the community and provide a great place to get some exercise. Marcus talked about the design of the path and how it has been made for everyone. People of all ages and abilities can use the path because it is easy to access, has no steep slopes and has an all-weather surface. You can find out more by watching the video.

Before construction of the Waterview Shared Path could go ahead many different people had to be consulted. Local iwi and people living in the area all had the opportunity to share their ideas and concerns and this led to lots of changes in the design and position of the path. Parts of the path are built in areas that are challenging. Some clever engineering has helped avoid houses, historic sites, and parks. You saw a bridge at Harbutt Reserve that has been specially designed to reduce the impacts of the path on the neighbours. It was impressive to see just how much work has gone into this structure and I’m sure it will last even longer that its expected 100-year lifespan.

The Waterview Shared Path is one of many such paths in Auckland which encourage people to cycle or walk through parts of the city rather than drive. You visited the Light Path in the centre of the city and met with Alan Meharry from Auckland Transport. Alan works on cycleways and wanted to show you some of the weird and wonderful features of the path. Lights line the edge of this path and light up at night when you pass by. The path was made when an old off ramp was closed and replaced by a new road. This ramp has provided the perfect place for a shared path and is used by lots of cyclists, runners and walkers. The path is covered in a layer of recycled glass to give it a grippy, all-weather surface and the bright pink colour makes it unmissable. Alan explained that the colour has helped make people more aware of the path and added to its charm. It was neat to be able to walk leisurely along the path and take in the views of the city without having to worry about traffic. You can find out more about the path by watching the video.

Room for cars and cycles

Cycleways don’t have to be built from scratch. The edge of roads can be the perfect place for cyclists to ride safely in lanes of their own, protected by barriers. You saw a dual direction cycleway that had been formed alongside the road along the waterfront. Raised gardens and concrete barriers separated the cycle lanes from the car lanes giving cyclists plenty of space to ride safely. These lanes were created by removing car parks and are now used by thousands of cyclists. Sensors in the road count the number of cyclists that pass by and I was impressed to see that this year there have been over 150,000 cycle trips already. Watch the video to find out more.

Tomorrow you will be back on your bike to learn more about how to stay safe while cycling. 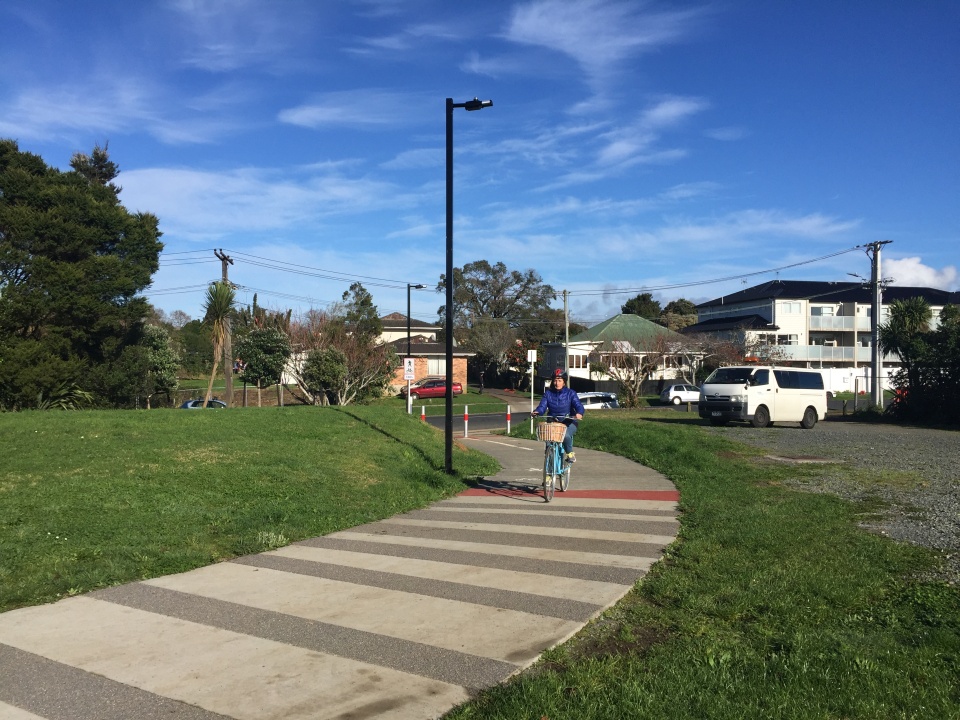 A cyclist enjoys the purpose-built Waterview Shared Path. Do you think cycle paths are important and, if so, why? Image: LEARNZ. 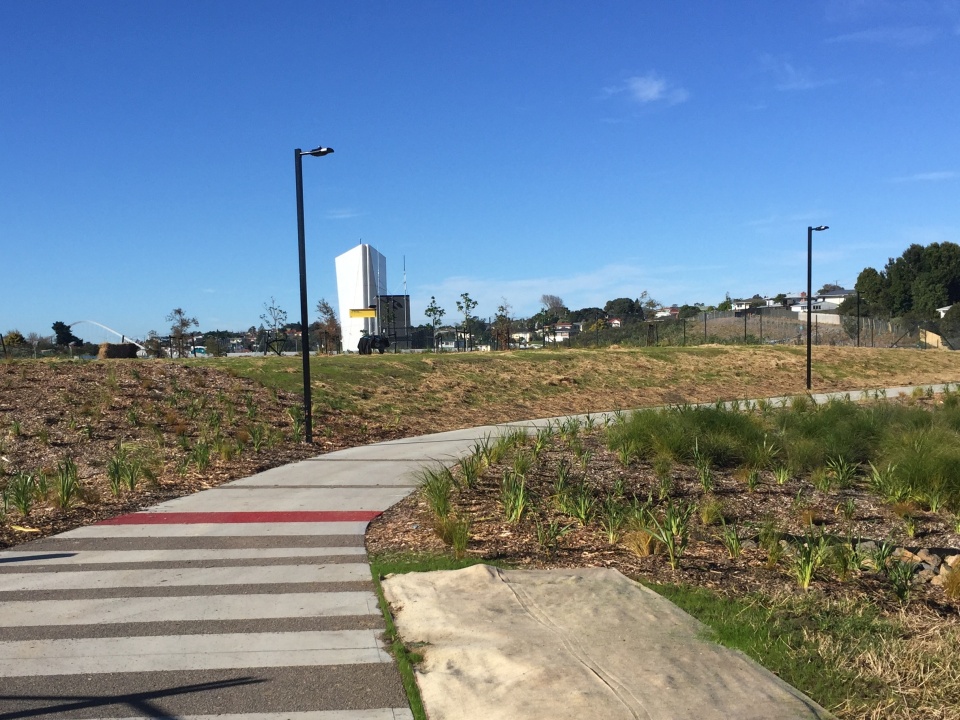 The Waterview Shared Path connects the local community. You can see the Waterview tunnel ventilation shaft in this photo. Image: LEARNZ. 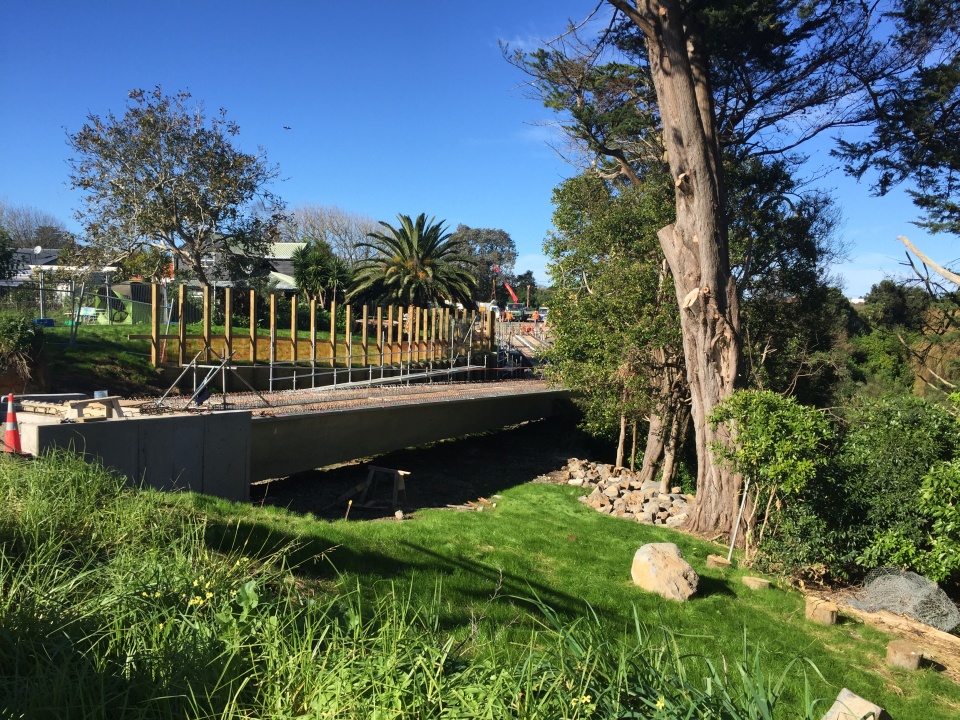 This bridge at Harbutt Reserve has been specially designed to reduce the impacts on the neighbours and park. Image: LEARNZ. The Alford Street Bridge creates a connection across a steep gully to the Unitec campus. Image: LEARNZ 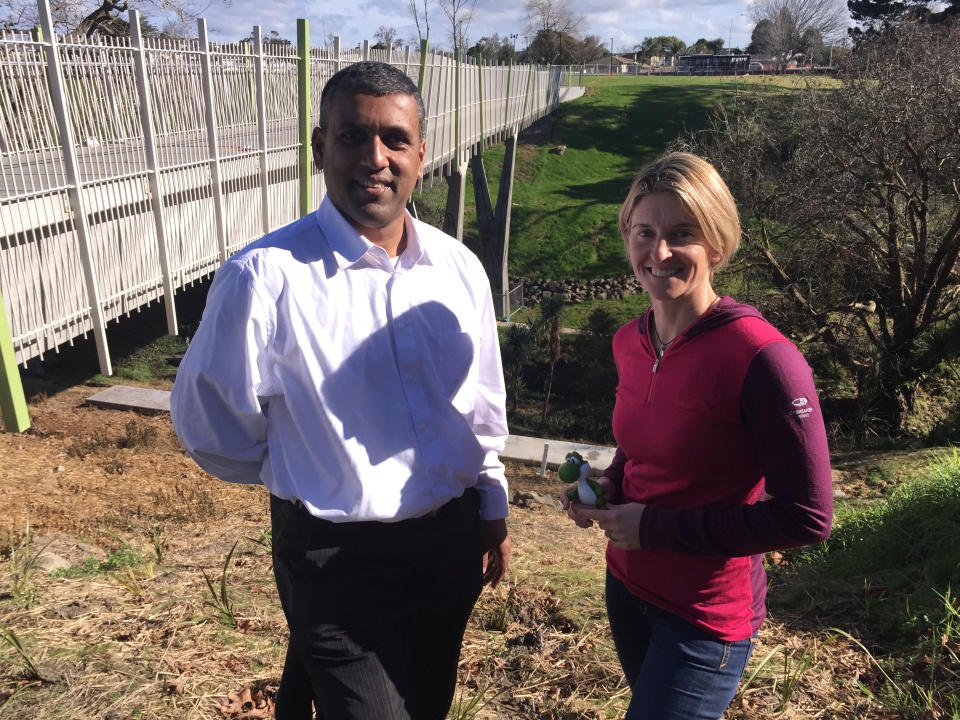 Marcus and Shelley take a closer look at the design of the Alford Street Bridge. Image: LEARNZ. 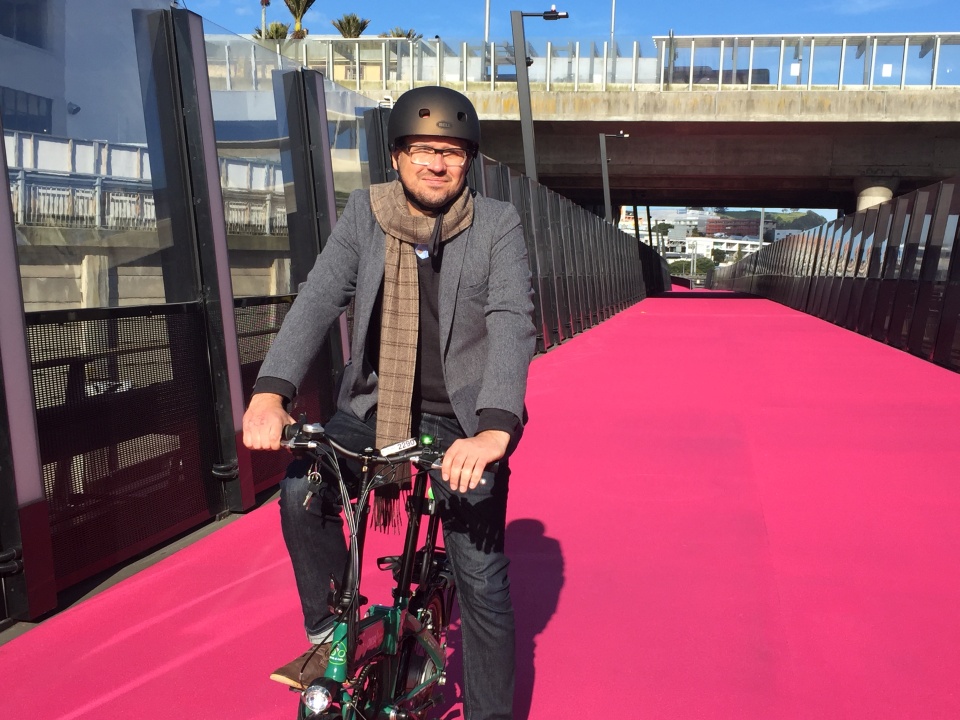 Alan goes for a ride along the Light Path in the centre of Auckland. Why do you think this path was painted pink? Image: LEARNZ. 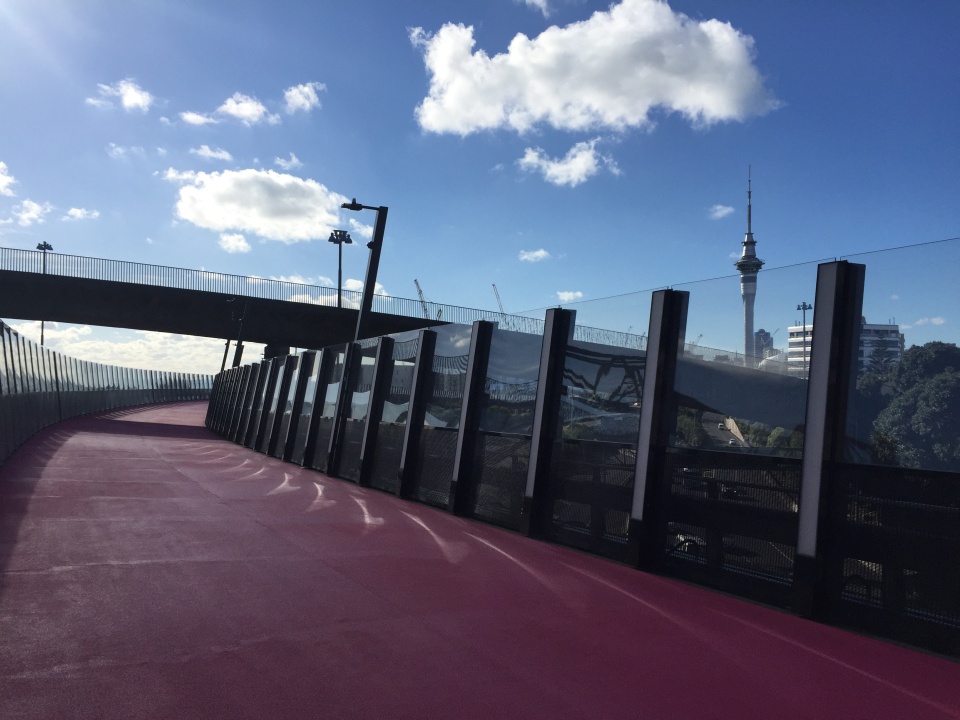 The Light Path used to be an off ramp to the motorway and now it provides an off road connection to the centre of the city. Image: LEARNZ. 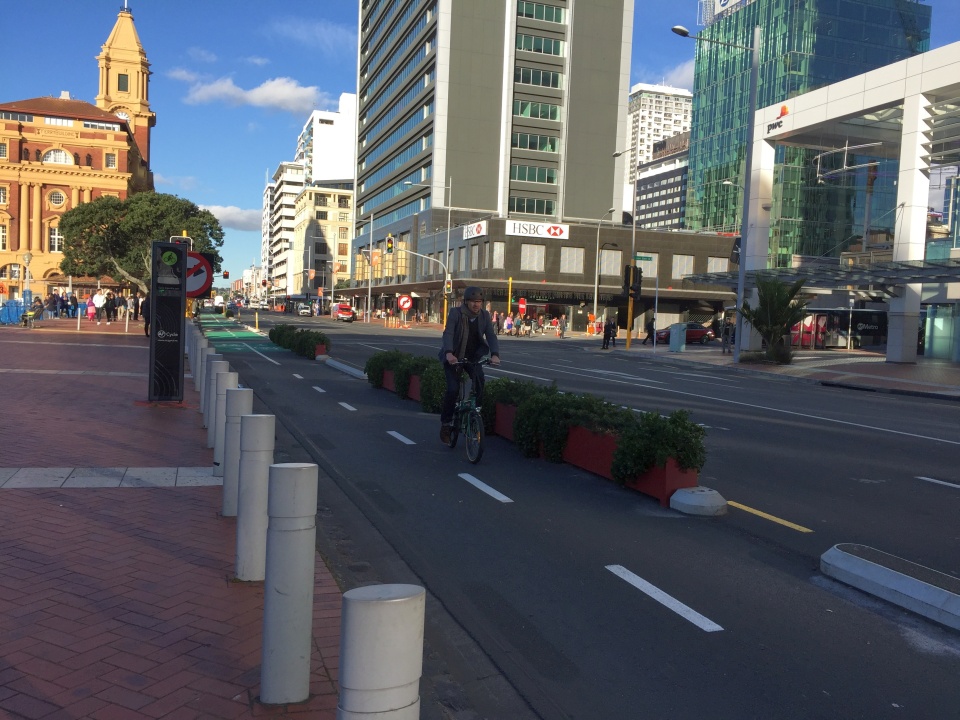 A dual-direction cycleway has been created by removing car parks. How is the use of this cycleway monitored? Image: LEARNZ. 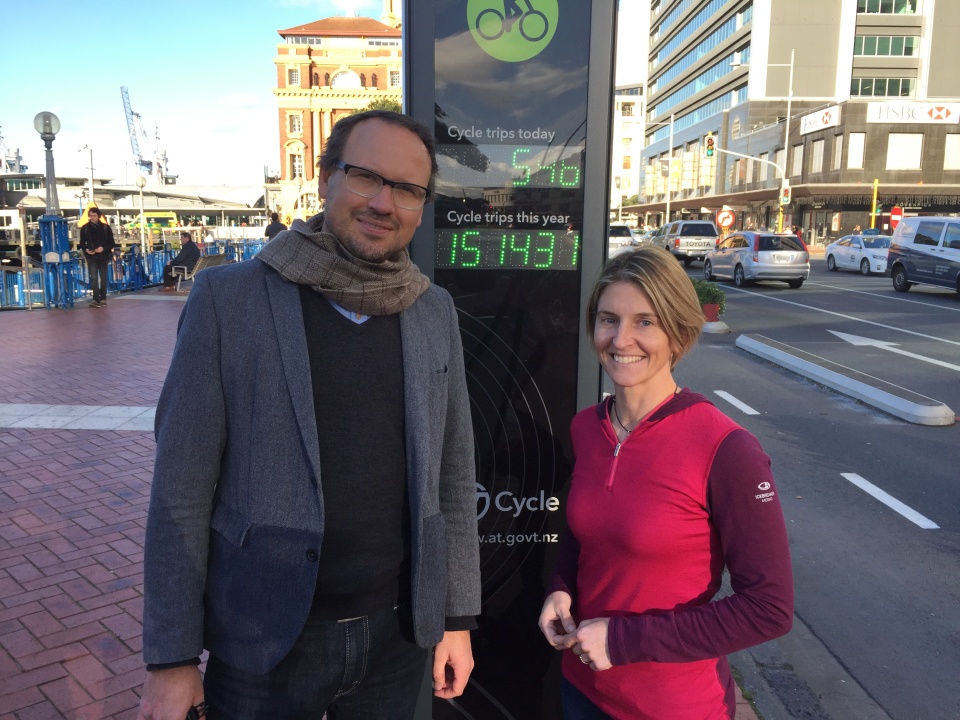 Alan shows Shelley how data is collected on how many cyclists use the cycleway. Image: LEARNZ.