You may have found it difficult to sleep last night. There was no escaping the constant Antarctic sunlight and the bright yellow tent made it even worse. Eventually I pulled my hat over my eyes and fell asleep. The temperature dropped sometime in the early morning, but the double sleeping bag kept out the cold. After breakfast you said your farewells to the scientists and headed back to Scott Base for a well-earned rest over the weekend.

When things don’t go according to plan

On Monday morning after the web conference with Paraparaumu Beach School and Waipipi School you headed back to Cape Evans with Ken Ryan. You were keen to catch up with the rest of the team and see how their experiments were progressing. When you arrived at the camp you discovered that the team had suffered a setback. Over the weekend the decision was made to drill a new hole in the ice. The scientists needed to be sure that the water below was deep enough for their equipment. They had decided that it was too risky to use the hole that had already been drilled. Drilling through two-metre-thick sea ice is a big job. You can see this on the video. To begin they marked out the size of the hole and used a large drill to drill as many holes as they could. Then they had to use a hot water drill to cut through the remaining ice. This is a very slow process. Each member of the team completed two-hour shifts holding the hot water drill. You helped and realised what a cold and boring job this is. Working in places like Antarctica is an amazing experience but it is also full of challenges.

When you’re using the hot water drill you have plenty of time to enjoy the scenery and at least the weather was fine. Just as Vanessa offered to take over the drill Fraser spotted some emperor penguins waddling towards camp. I could not believe our luck. This is my sixth visit to the ice and I have only seen emperors once before. A group of six curious penguins came to check out the camp. They posed in front of everyone who had gathered to take photos. A couple of penguins seemed to have a disagreement and kept hitting each other with their flippers. One penguin who we nicknamed Eric led the way. He would flop down on to his belly and scoot along the ice. Eventually the other penguins would follow.

Emperors are the tallest and heaviest of all penguins and are the only birds to breed during the Antarctic winter. It was hilarious watching these birds. They explored every part of the camp and hung around for ages. It was quite a treat to watch them shuffling around and you can watch the video to see what they got up to. Seeing these penguins also reminded everyone of the importance of sea ice and the algae that grows on it. Penguins eat krill and fish. Krill eat the algae that grows on the sea ice. So, less sea ice may mean less food for all marine creatures. Eventually the emperors lost interest and headed south. They were later spotted at another camp several kilometres away.

Putting Cape Evans on the map

When people talk about Antarctic history and exploration it’s impossible not to talk about Cape Evans. In summer there is no sea ice at Cape Evans and you can get here by boat. This is where Captain Scott and his team set up their base hut to prepare for their trek to the South Pole. Lizzie from the Antarctic Heritage Trust has been working on clearing snow from Scott’s hut today. Lizzie talked to you about the history of this area. Scott’s team wanted to be the first to reach the South Pole. They also did a lot of scientific work. Many weather recordings were done here. Water samples were collected, and the ocean was studied. Unfortunately, Scott’s team was beaten by Amundsen to the pole and they died on the return journey, but some of their scientific work continues today. You can watch the video to find out more. I felt so lucky to be in such a spectacular place with so much history.

Just as you were about to head back to Scott Base the drilling was finished, and it was time to pull out blocks of ice. A Pisten Bully from Scott Base had been brought in to do the heavy lifting. It was incredible to see how tall the columns of ice were. They were the size of large fridges and made you realise just how thick the sea ice is. On the bottom of the sea ice you could see a brown layer of algae. It was like a layer of grass on an upside-down paddock of ice. The algae are eaten by many different animals like krill and fish. These microorganisms are useful even when they have died. They drop down onto the sea floor adding nutrients and more food to the ecosystem. It was hard to leave the camp after such an action-packed day but weather permitting you will be able to return tomorrow. 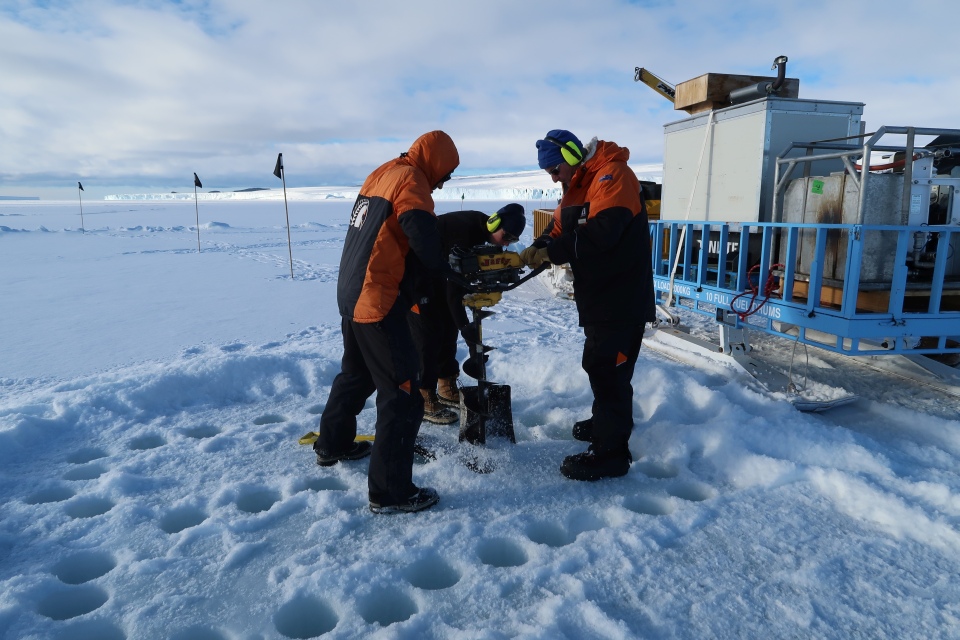 The scientists begin drilling a new hole in the sea ice. Why do you think they needed to drill a new hole? Image: LEARNZ. 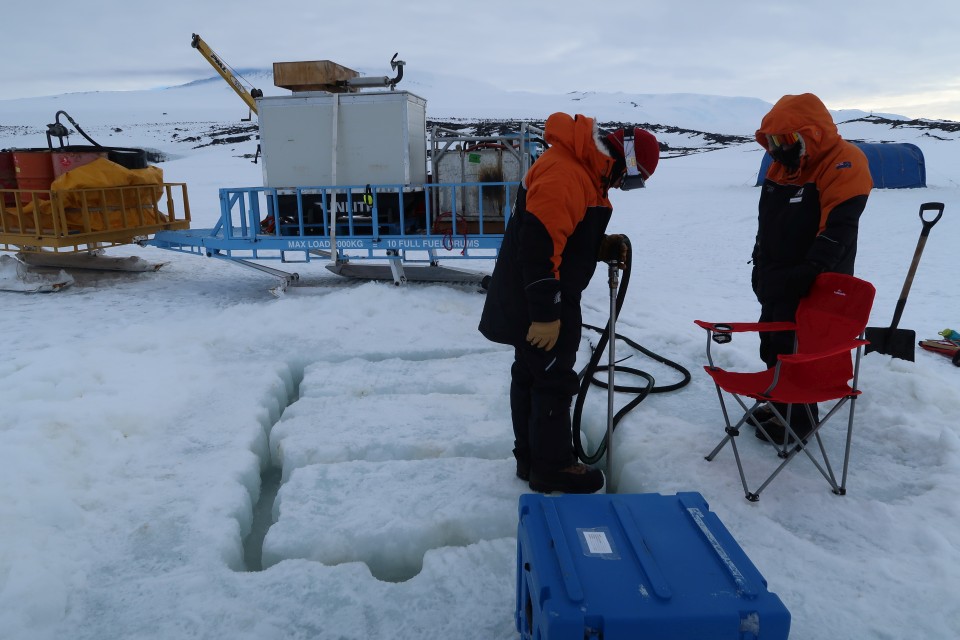 After drilling lots of small holes in the ice the scientists use a hot water drill to cut through large blocks of ice. Image: LEARNZ. 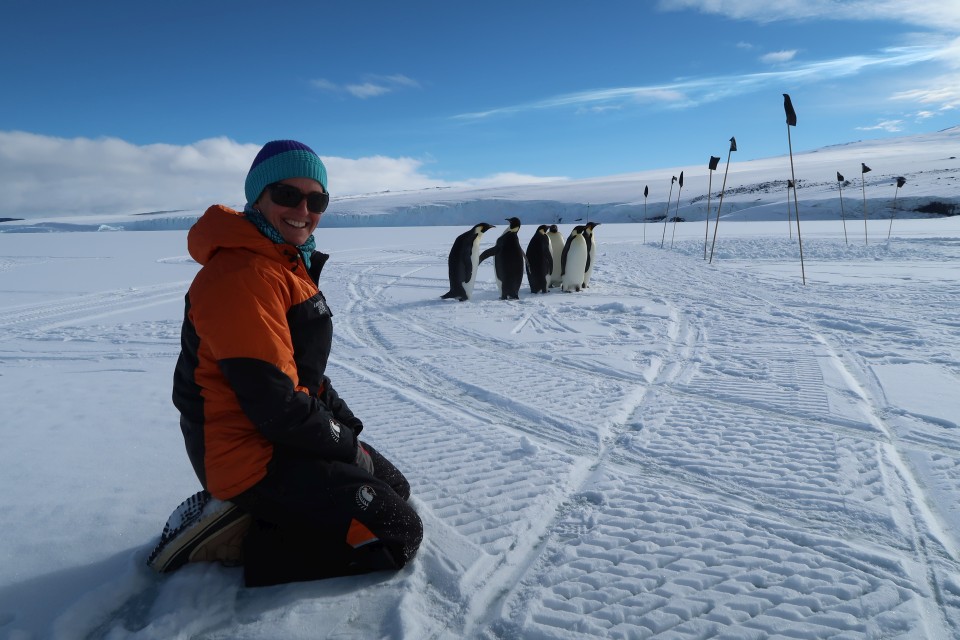 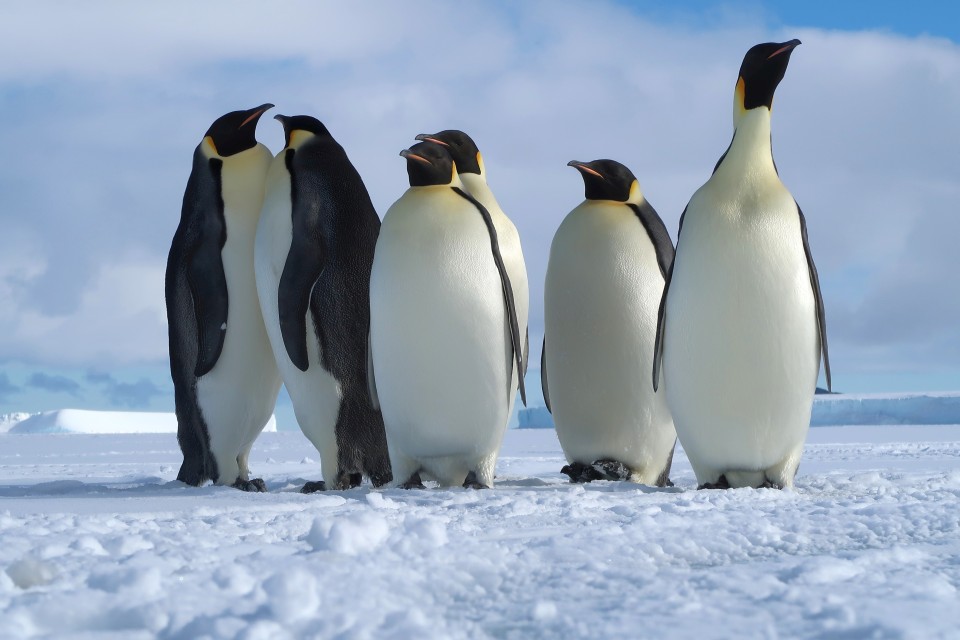 It was a special experience getting so close to emperor penguins. They weren't shy and seemed to enjoy exploring the field camp. Image: LEARNZ. 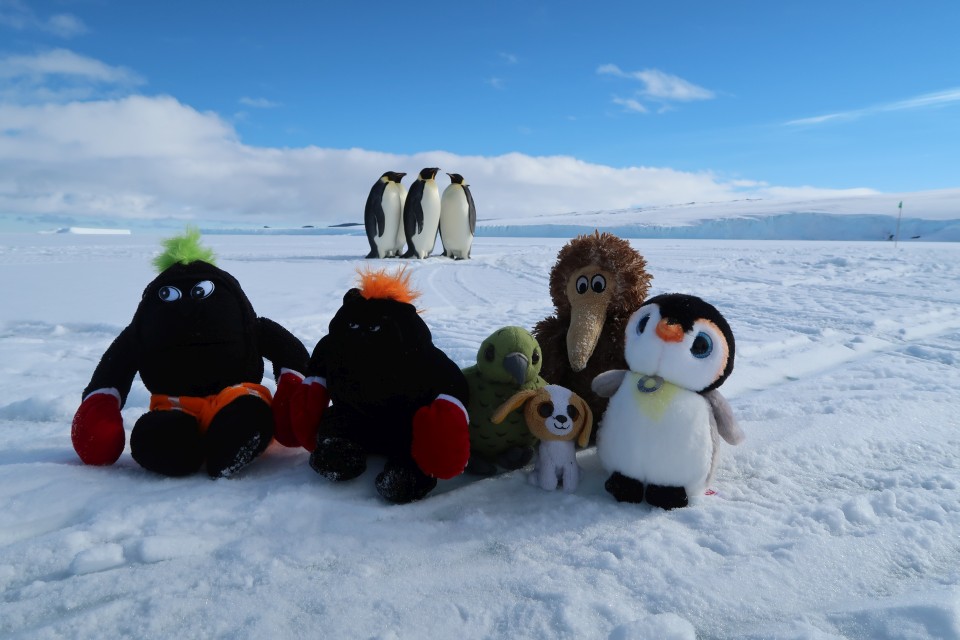 The ambassadors pose for photos with emperor penguins at Cape Evans. Emperor penguins are the tallest and heaviest penguins in the world and the only birds to breed during the Antarctic winter. Image: LEARNZ. 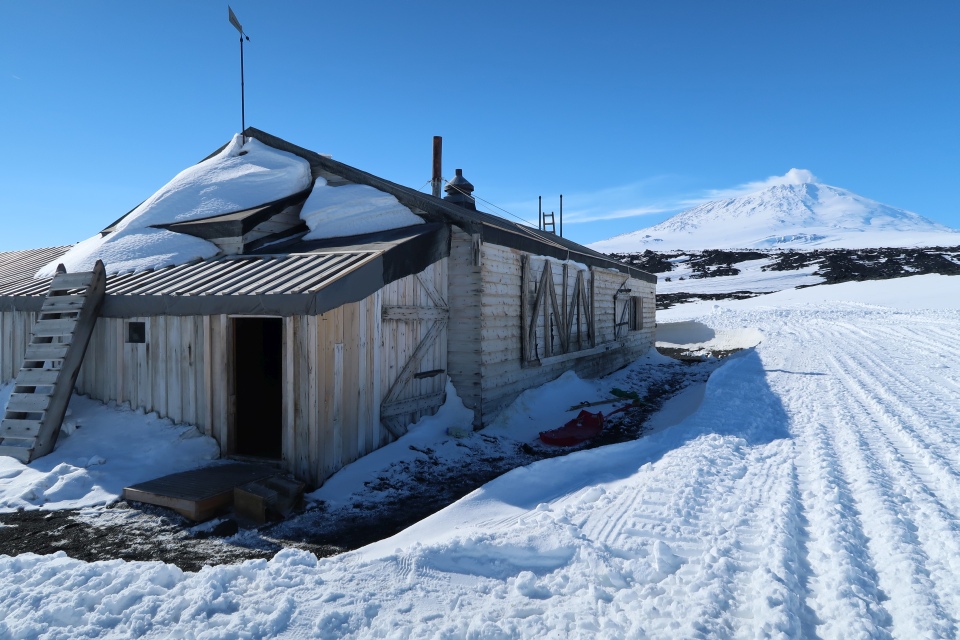 This is Scott's Terra Nova Hut at Cape Evans. It has been conserved by the Antarctic Heritage Trust. Today snow was cleared from around the hut using a snow grooming machine. Image: LEARNZ. 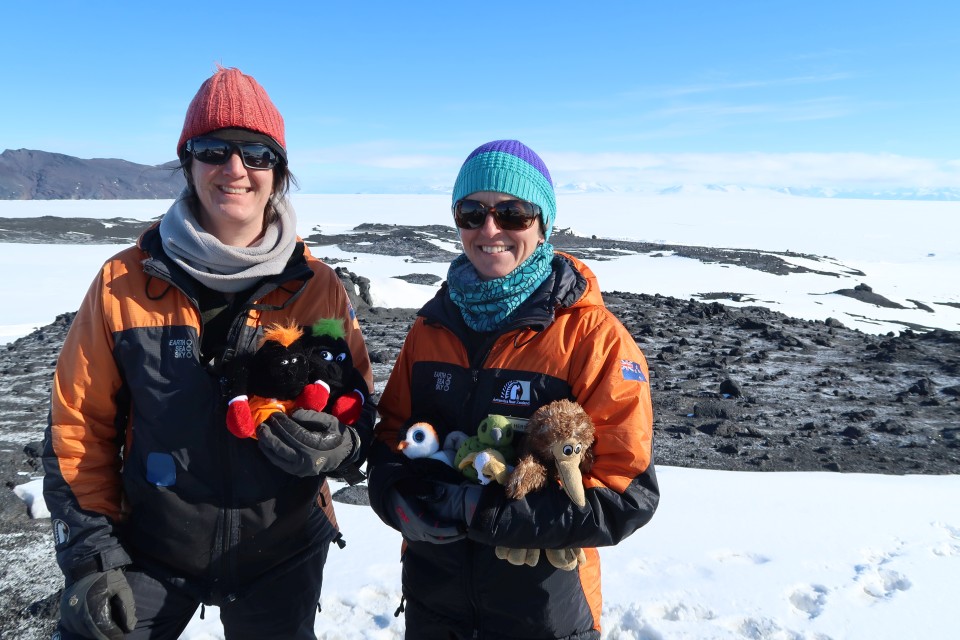 Lizzie Meek from the Antarctic Heritage Trust talks to Shelley about the history of Cape Evans. Why is Cape Evans an important part of Antarctic history? Image: LEARNZ. 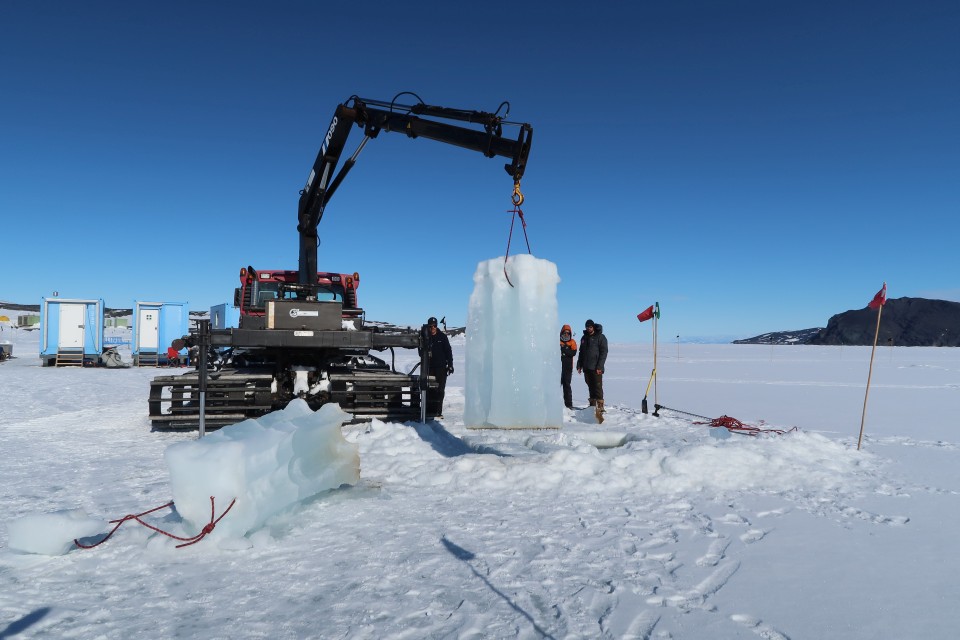 A block of ice that the scientists cut through with a hot water drill is pulled from the sea ice. How thick do you think this sea ice is? Image: LEARNZ. 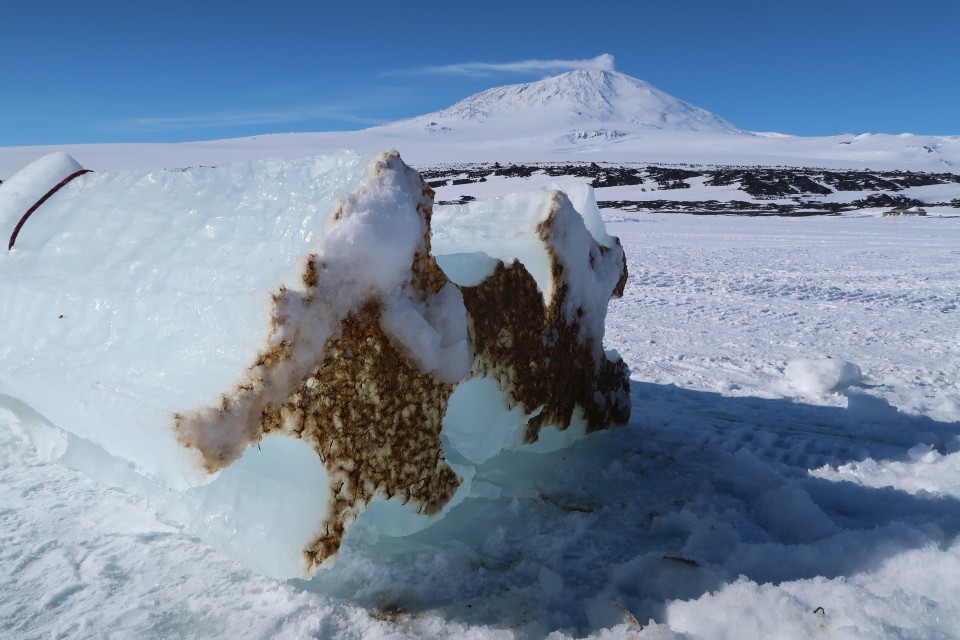 This column of sea ice shows the algae that grows on the underside. How do you think this algae survives the cold conditions of Antarctica? Image: LEARNZ.

A close look at the strands of algae growing on the underside of sea ice. What animals do you think eat this algae? Image: LEARNZ.