You woke early this morning, determined to make the most of your last day in Antarctica. The weather forecast predicted clear skies and strengthening winds, so you packed an extra jacket. Before heading out you spoke with students from Endeavour School and Masterton Intermediate School during the final web conference with Matilda Ballinger. Students were interested in how animals can survive in this frozen wilderness. It was interesting to hear that some fish have a type of anti-freeze in their blood to stop them from freezing in the -2 degree water. You can listen to a recording of this web conference to find out more.

Following the web conference, you headed back out to Cape Evans on the Pisten Bully. After passing McMurdo Station you enjoyed spectacular views out across McMurdo Sound to the mountains beyond. You could see Mount Erebus smoking away. Mount Erebus is about the same height as Aoraki Mount Cook and is the highest and most active volcano in Antarctica. You passed a group of Weddell seals basking on the sea ice. It made me wonder where these seals would be in a few months and how different this area will be when the sea ice melts.

A bitterly cold wind greeted you at Cape Evans. A lot of the snow that had been lying on the sea ice had been blown away. The landscape looked quite different. You headed into one of the science labs to escape the cold. Ken had been taking ice cores to collect samples of sea ice algae. He showed you how these samples can be analysed. One method is to saw off the bottom section of an ice core and gather some algae from it. You can then look at the algae under the microscope. You can see the strands of plant cells that make up the algae in the video.

Another method is to use cameras to scan for chlorophyll. Chlorophyll is the chemical that allows plants like algae to photosynthesise and produce food from the sun. The trick with this work was that the ice cores had to be drilled and then kept in the dark to stop them from being exposed to bright light. Sea ice algae live under ice where there isn’t much light. Exposing the algae to direct sunlight would put them into a state of shock and effect the accuracy of the science. Ken also described the other microbes that live in sea ice. A whole community of microorganisms have adapted to living in and under the ice, including bacteria and viruses. You can find out more by watching the video.

You also spoke to Fraser about his work. He showed you some very high-tech equipment and explained how it was used to measure stress in microbes. Just like people algae can get stressed and release different chemicals. Fraser will measure these chemicals to see how stressed algae can get. Fraser has been looking at how changes in light levels affect algae. When snow builds up on sea ice it blocks light. Strong winds can blow snow from the sea ice very quickly. Fraser wanted to know how stressed algae gets with these rapid changes in light. Fraser said it’s a bit like having your plate of food suddenly snatched away from you during a meal. I could see why this would be stressful! If scientists can work out the levels of stress that algae can cope with, they can gain a better understanding of how they will cope with climate change in the future. Watch the video about this.

Vanessa showed you some of the other equipment the scientists will be using under the ice. Some creative thinking and problem solving has allowed the scientists to develop a new way of monitoring sea ice algae. They will use a small ROV (remotely operated vehicle) to set up a line to drag a sled under the sea ice. The sled will carry cameras and sensors to monitor the algae and build a map of the ‘meadows’ of algae. If this works, it will allow the scientists to see how algae responds to changing conditions over time. This method will be more accurate than taking small samples from ice cores, but it has never been tried before. Over the next three weeks the scientists will be testing this protype. I wish we could have stayed to see how it works but we had to head back to base.

How can you help?

Back at Scott Base you met Matilda, who was heading out for a walk. You ended up talking about the future and what Antarctica might be like in fifty years from now. No one knows for sure what impact climate change will have, but there is no doubt that we can all do our bit to help. If we all make small changes these can add up and have a large impact and we can all help preserve precious places like Antarctica.

It has been an incredible few days here in Antarctica! I hope you have enjoyed the trip south as much as I have. 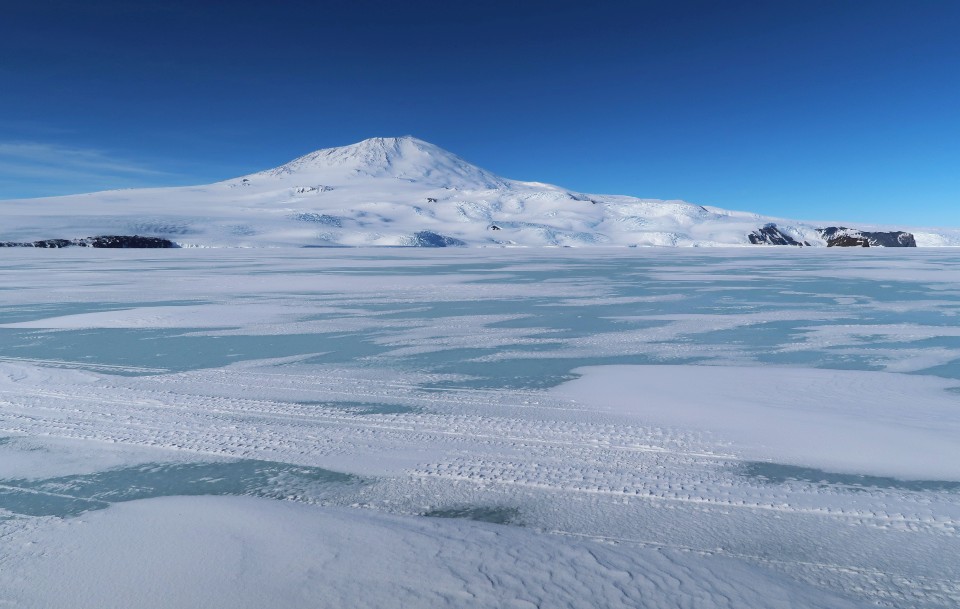 You enjoyed great views across the sea ice to Mount Erebus as you drove to Cape Evans. You can see patches of sea ice where the wind has blown the snow away. Image: LEARNZ. 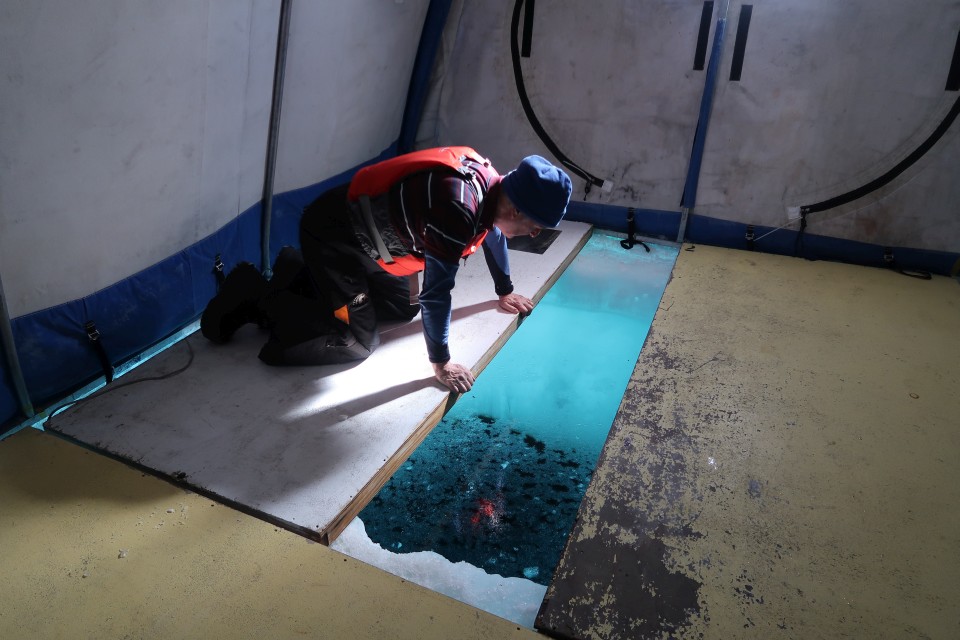 Ken Ryan checks the new hole which has been drilled in the sea ice. Image: LEARNZ. 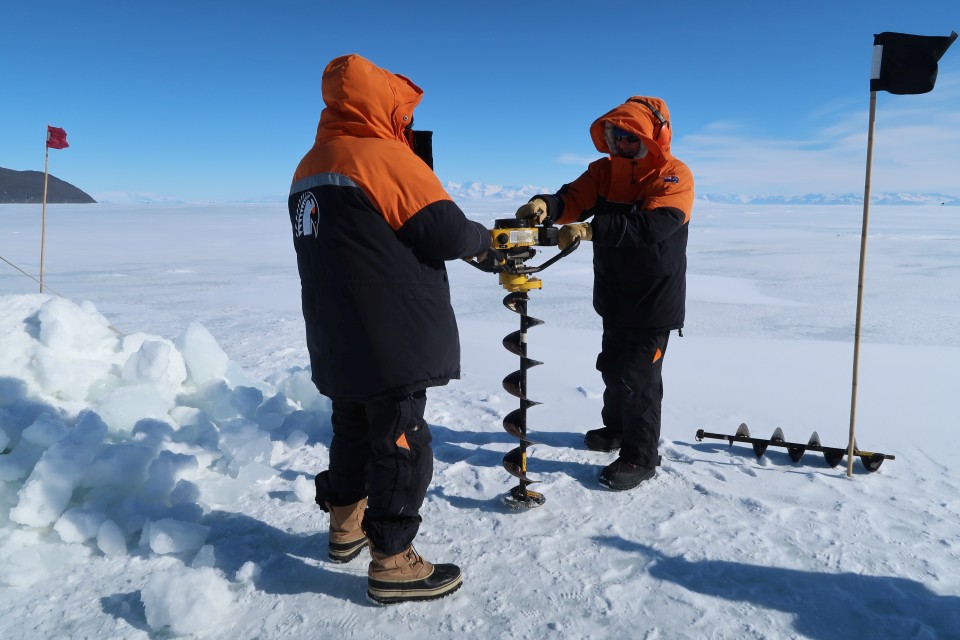 The scientists drill a hole with a jiffy drill so they can then take an ice core to sample the sea ice algae living on the underside of the sea ice. Image: LEARNZ. 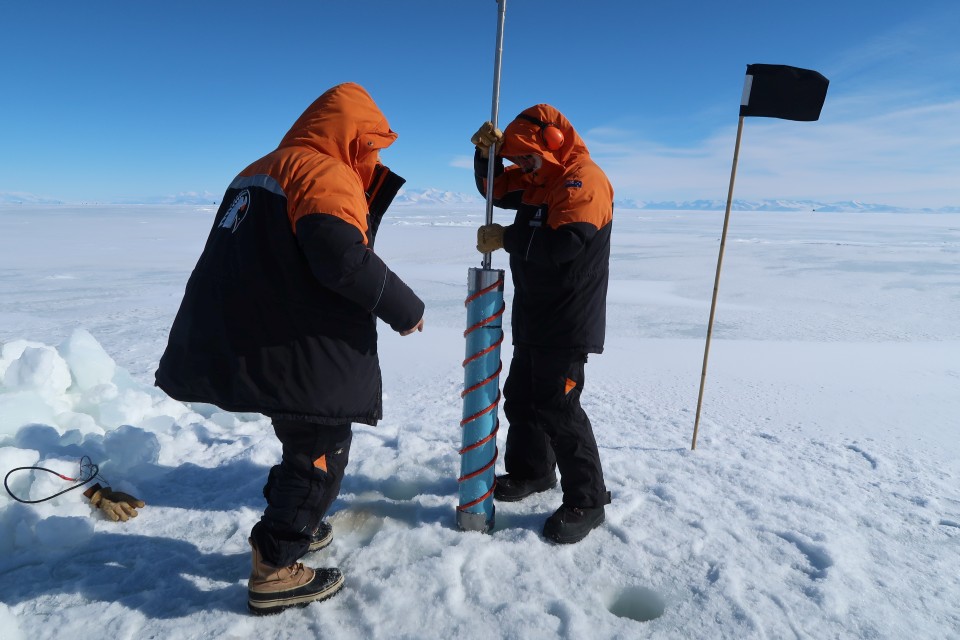 This circular tube will cut a core of ice from the bottom of the sea ice so the sea ice algae can be analysed. How thick is the sea ice here? Image: LEARNZ. 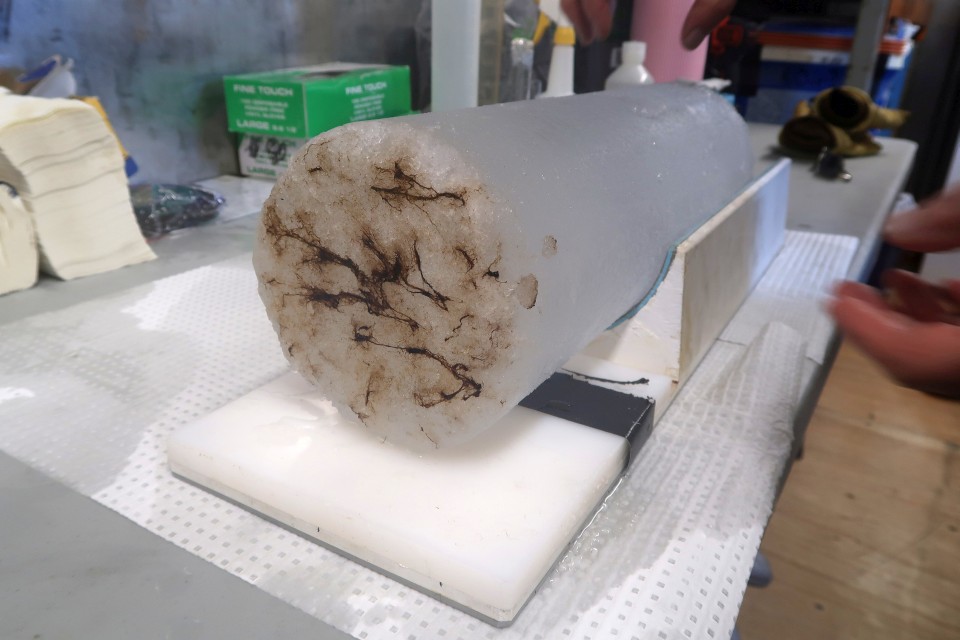 Back in the lab the scientists collect sea ice algae from the ice core so they can look at it under a microscope. Image: LEARNZ. 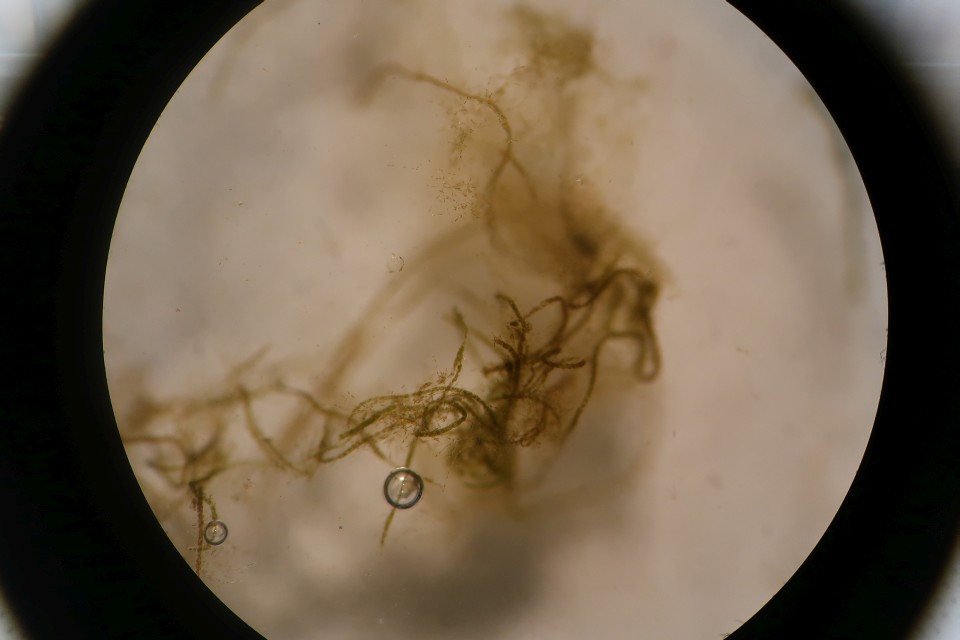 Looking at sea ice algae under a microscope magnified four times. Strands of sea ice algae are made up of microbes called diatoms. These microbes are also known as phytoplankton or plant plankton. What community does sea ice algae belong to? Image: LEARNZ. 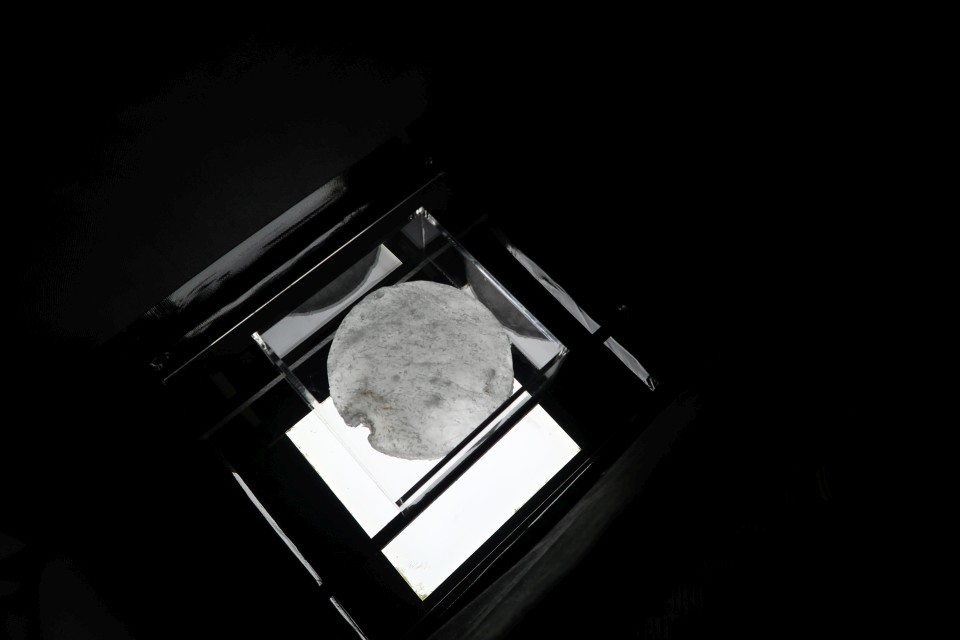 A slice from a sea ice core is being scanned for sea ice algae. Why do you think this needs to be done in the dark? Image: LEARNZ. 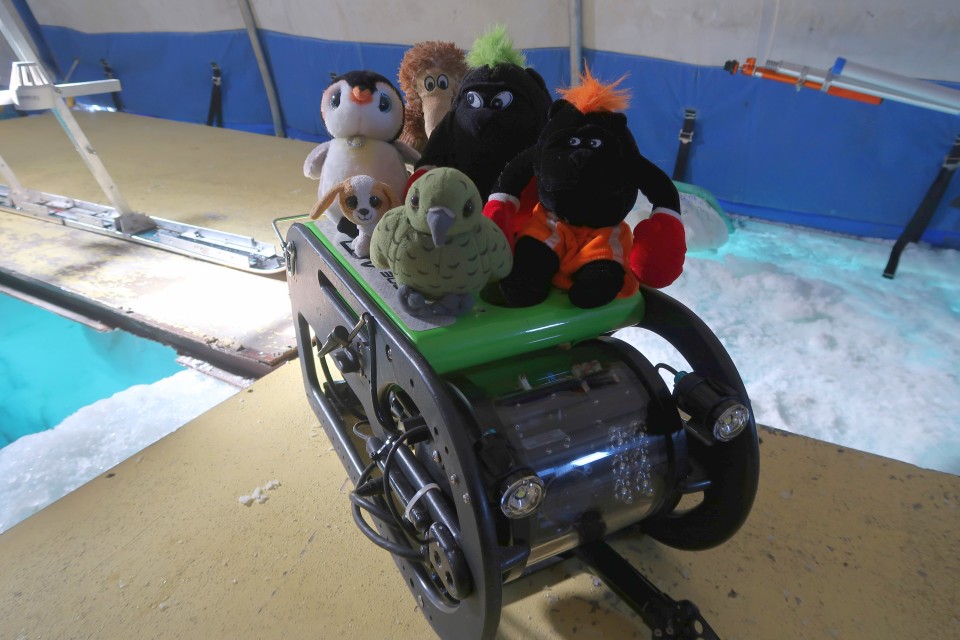 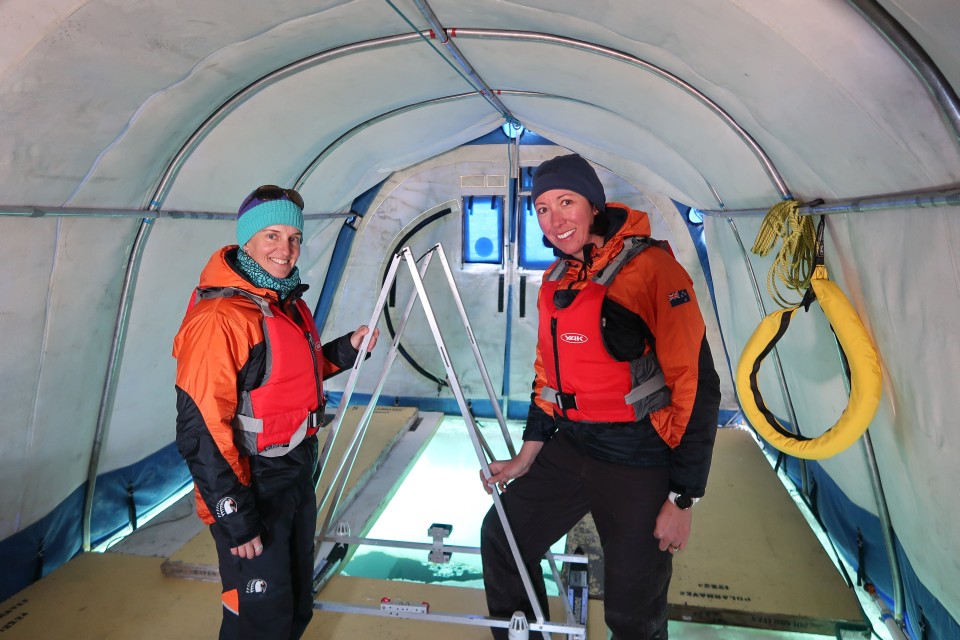 Vanessa shows Shelley the frame which will be used as a sled that will be pulled along the underside of the sea ice. The sled will carry sensors and cameras to monitor sea ice algae. Image: LEARNZ. 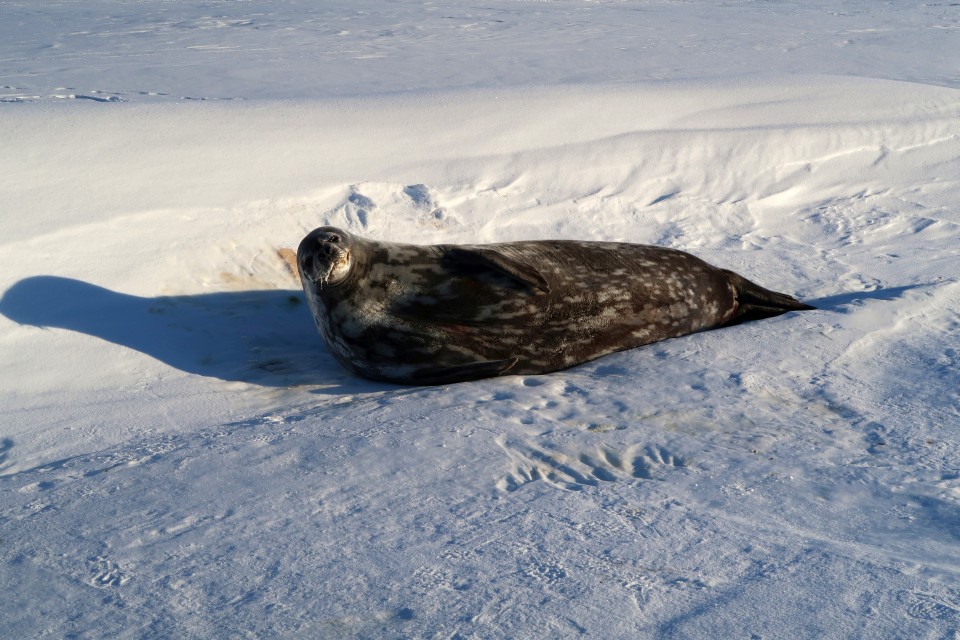 A Weddell seal is spotted outside Scott Base. Image: LEARNZ. 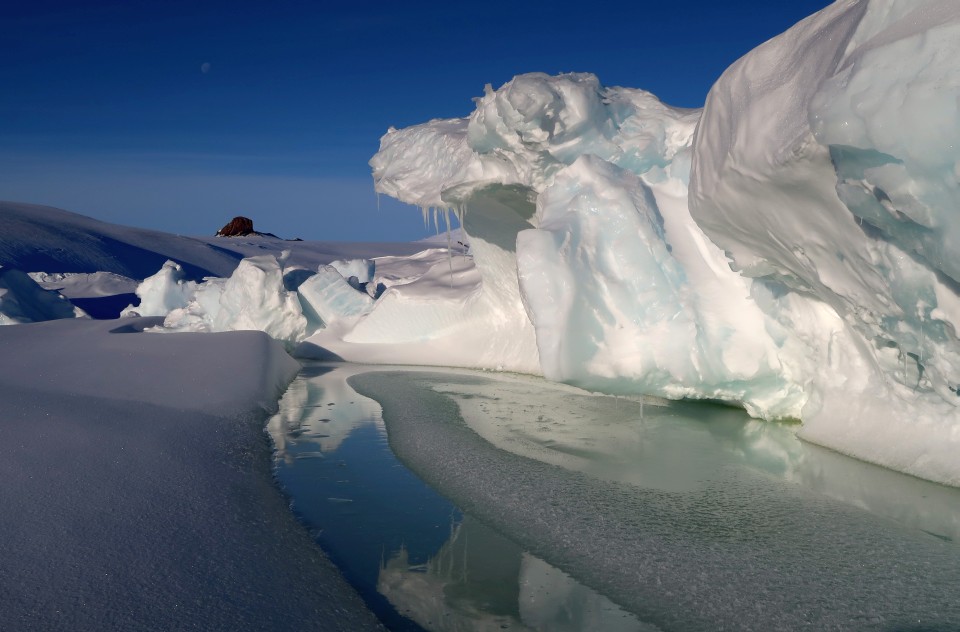 You ended the field trip with a wander under the midnight sun through the spectacular pressure ridges outside Scott Base. These ridges are formed where the sea ice meets the Ross Ice Shelf. Image: LEARNZ.