It was another wet day in the Hawke’s Bay today. If it carries on, we might have a flood on our hands!

Our second field trip web conference took place at St John Ambulance in Taradale. Our web conference experts were Ian, a paramedic from St John; Bruce, a fire fighter from Fire and Emergency Napier; and Rakei from Civil Defence.

Once again it was an open session, with all questions coming from our listening schools. There were a range of topics which sparked some good conversations. Remember you can access the recording if you missed the live web conference.

After the web conference, Ian showed us around the St John building. We also got to look inside an ambulance and see all the equipment they use during emergencies.

In a natural hazard emergency, there are going to be people needing medical attention. Ian said that paramedics will usually base themselves just outside the “hot zone” and have other emergency services bring people to them for attention. They will sometimes enter that “hot zone” if someone needs medical help and cannot be moved. You can watch the video where I talk with Ian about the role of St John Ambulance in a natural hazard emergency.

From St John we made our way to Napier Fire Station. Here we caught up again with Bruce from this morning’s web conference. What I found interesting talking with Bruce is that FENZ is more than just putting out fires. They also have people who are trained to administer first aid, for example. Not all natural hazard emergencies will involve fire, but that doesn’t mean FENZ personal are not needed. They have a range of skills that are useful when natural hazard emergencies occur. In what other ways do you know of or think that Fire Emergency Services might help during a natural hazard emergency?

Bruce is also involved in USAR – Urban Search and Rescue. In the video he explains more about his role with this organisation.

After some lunch we went to Napier Central Police Station. We met Senior Sergeant Bryan Smith and talked with him about the role Police play in a natural hazard emergency. It’s an easy question to ask, but not an easy one to answer! In short, Bryan said the first job for Police is to save lives. It all depends on the situation and the level of need. There are a range of skills and divisions within the police and they will operate at all levels within an emergency. I think out of Fire, Ambulance, and Police, it is Police that would end up involved in a greater variety of roles in a natural hazard emergency. What do you think?

Once Eddy, Stan and I were released from the Police Station, we met up again with Rakei at the Hastings Emergency Management Office. Unlike the emergency services we learned about earlier in the day, Civil Defence It is not an organisation that will go straight to the scene of the emergency. Instead, Civil Defence manages the response and recovery functions for national emergencies. It also supports the management of local and regional emergencies. Rakei showed us around the Emergency Management Office and gave us an idea of how this place works to communicate with and coordinate all the people and plans needed during a natural hazard emergency. There’s a lot involved, but hopefully by watching the video you will get a better idea of how it all works.

Tomorrow is the ShakeOut earthquake drill and tsunami hikoi. Are you going to be involved?

Catch you for our final day of the field trip, 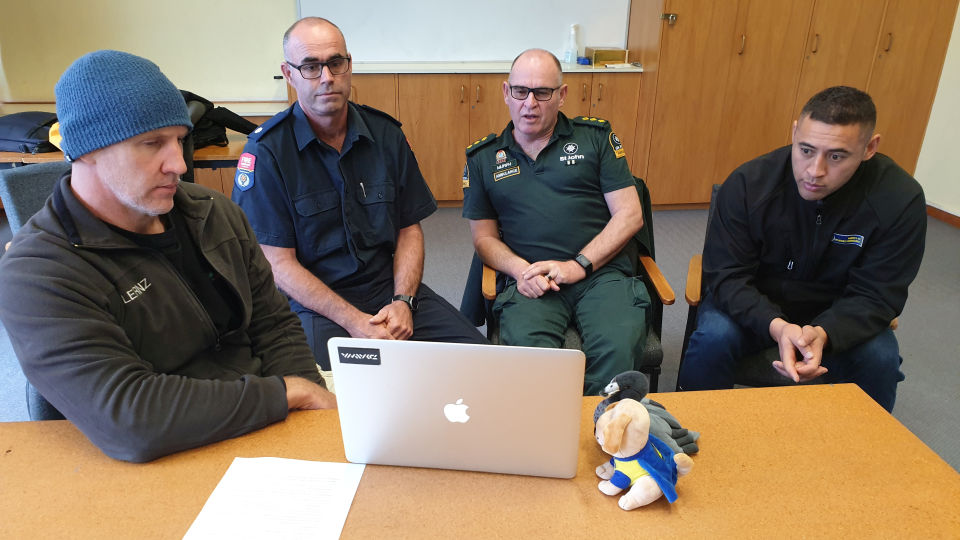 This morning's web conference was inside one of St John's training rooms. What sort of training do you think happens there? Image: Shelley Hersey, LEARNZ. 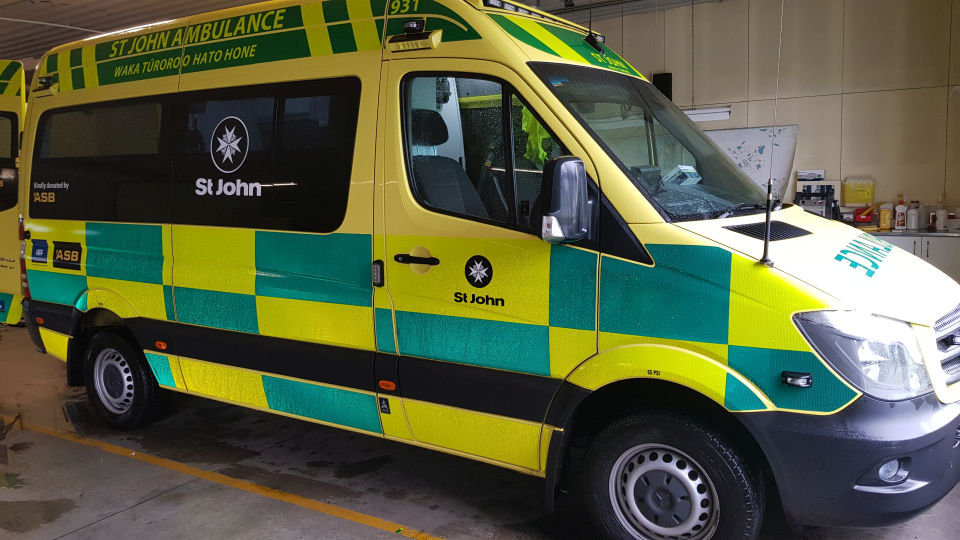 Once of the ambulances at St John. What sort of treatment might peole need during a natural hazard emergency? Image: Andrew Penny, LEARNZ. 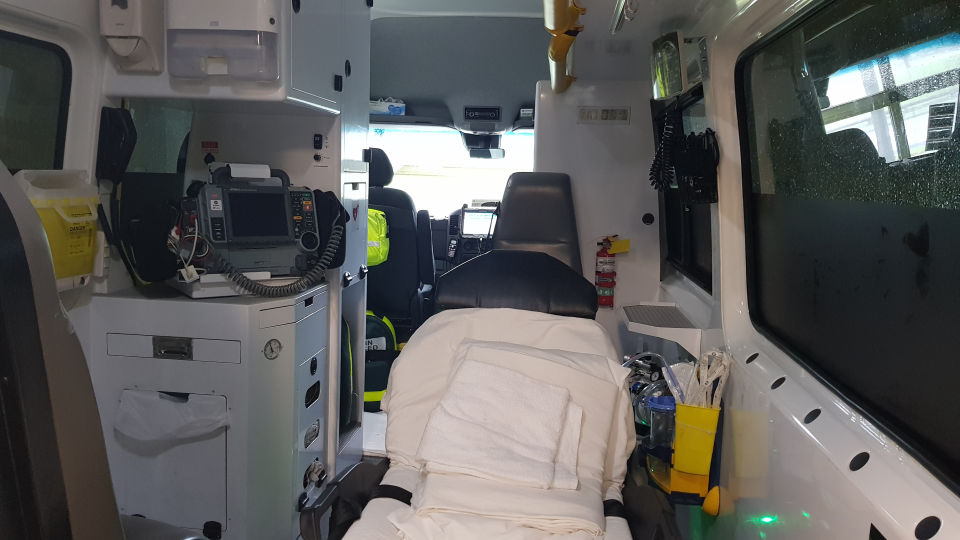 A look inside the back of the ambulance. Have you ever needed the services of an ambulance? Image: Andrew Penny, LEARNZ. 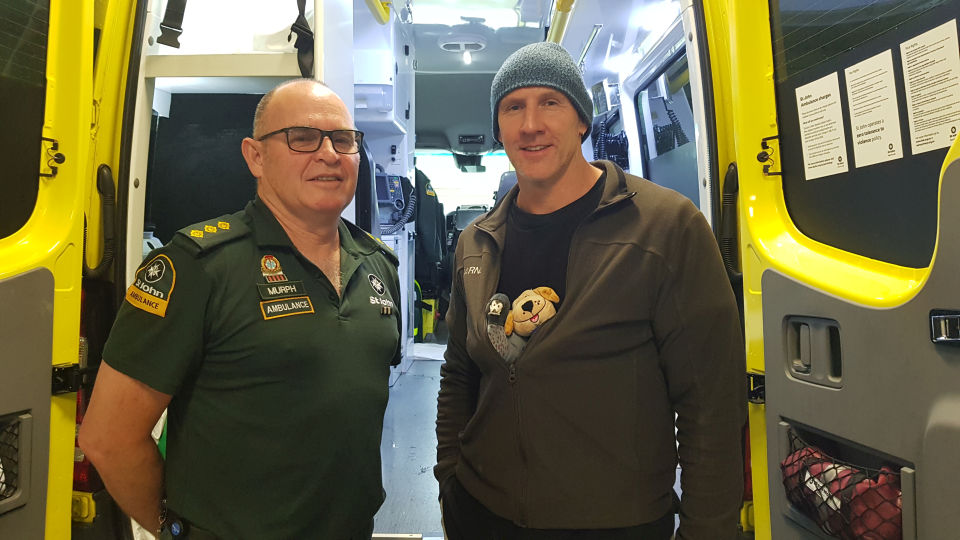 Andrew and the ambassadors with Ian at St John in Taradale. Image: Shelley Hersey, LEARNZ. 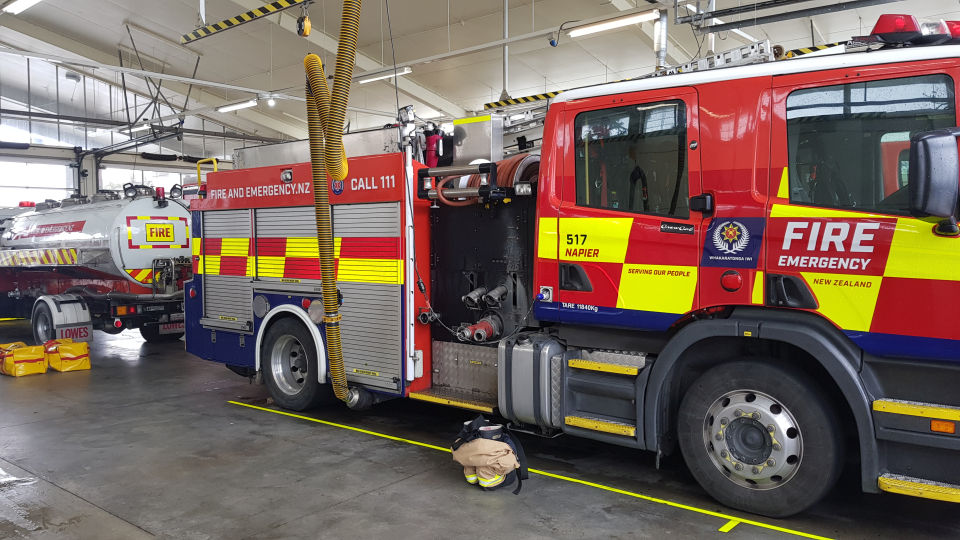 One of the appliances at Napier Central Fire Station. Image: Andrew Penny, LEARNZ. 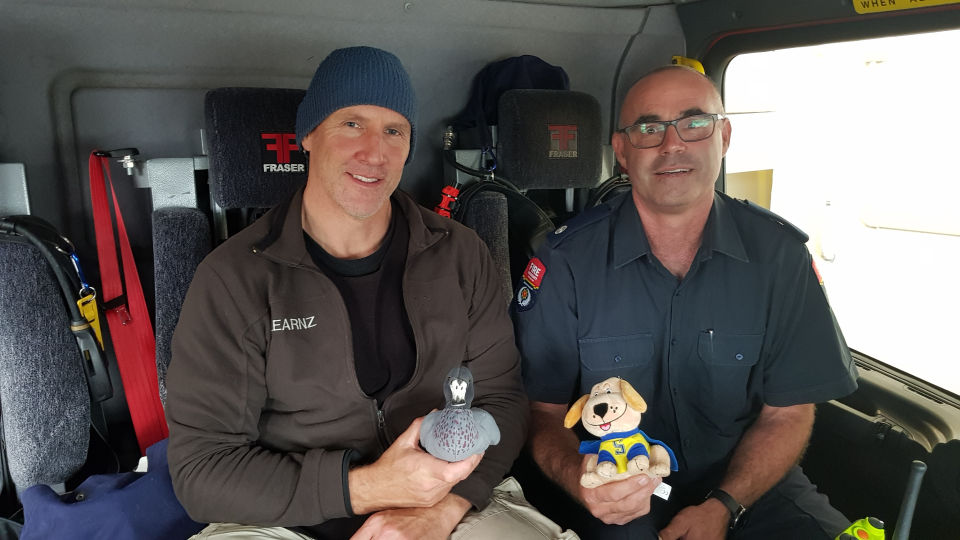 Andrew and the ambassadors with Bruce inside one of the fire trucks. Image: Shelley Hersey, LEARNZ. 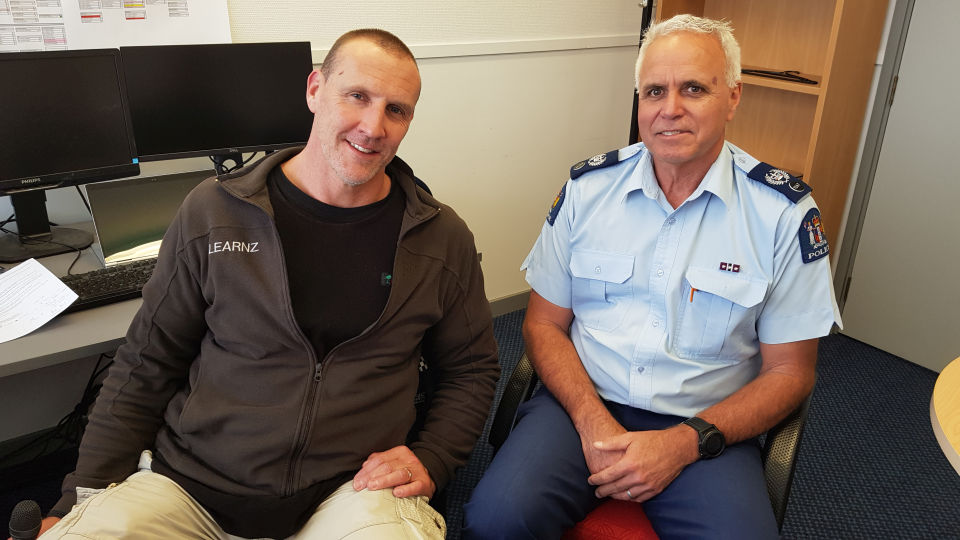 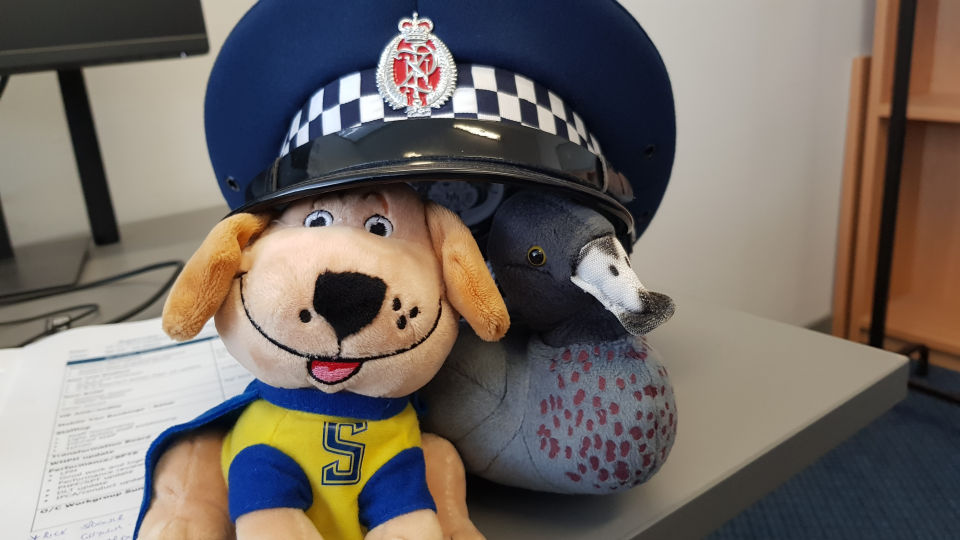 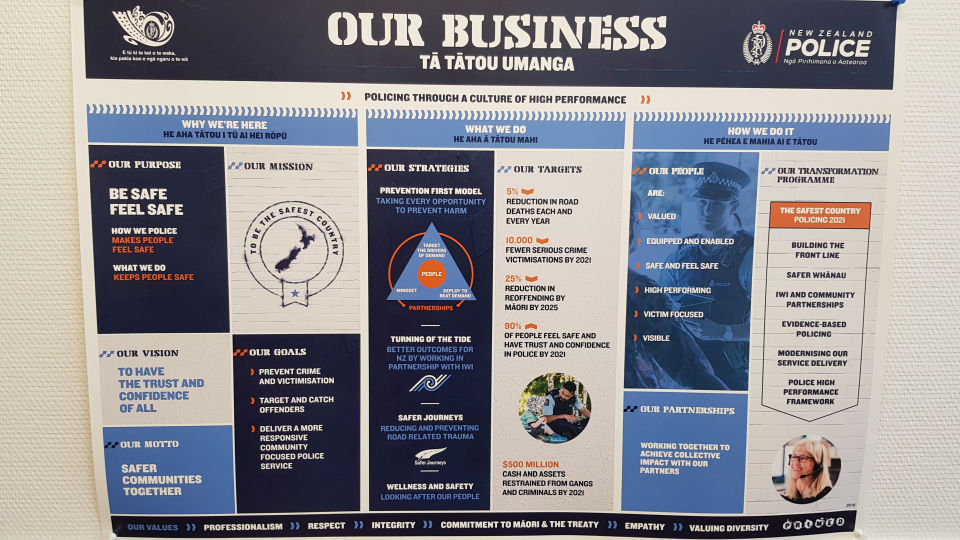 This poster inside Sergeant Smith's office gives a good overview of what Police "business" is. Image: Andrew Penny, LEARNZ. 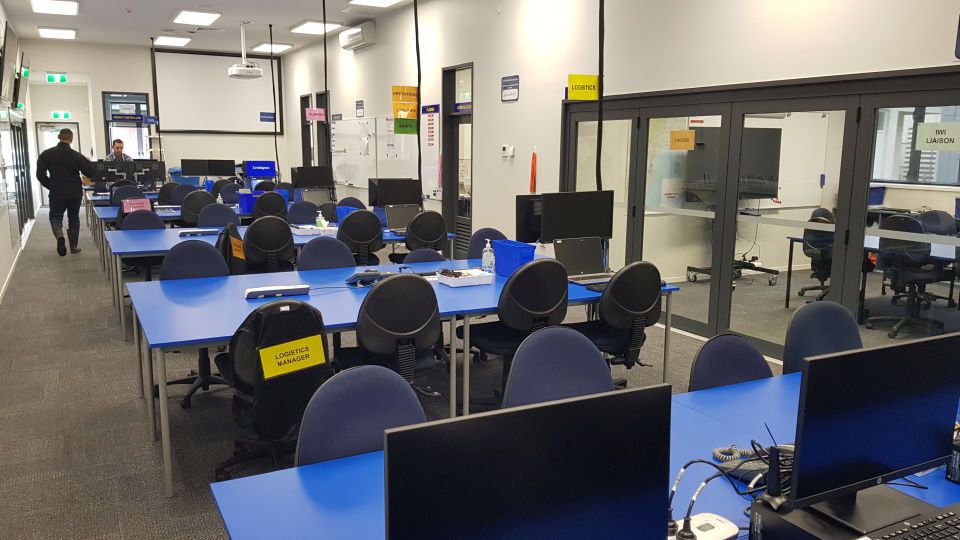 A look inside the Emergency Management Office. I wonder what it would be like in here during an actual emergency. Image: Andrew Penny, LEARNZ.